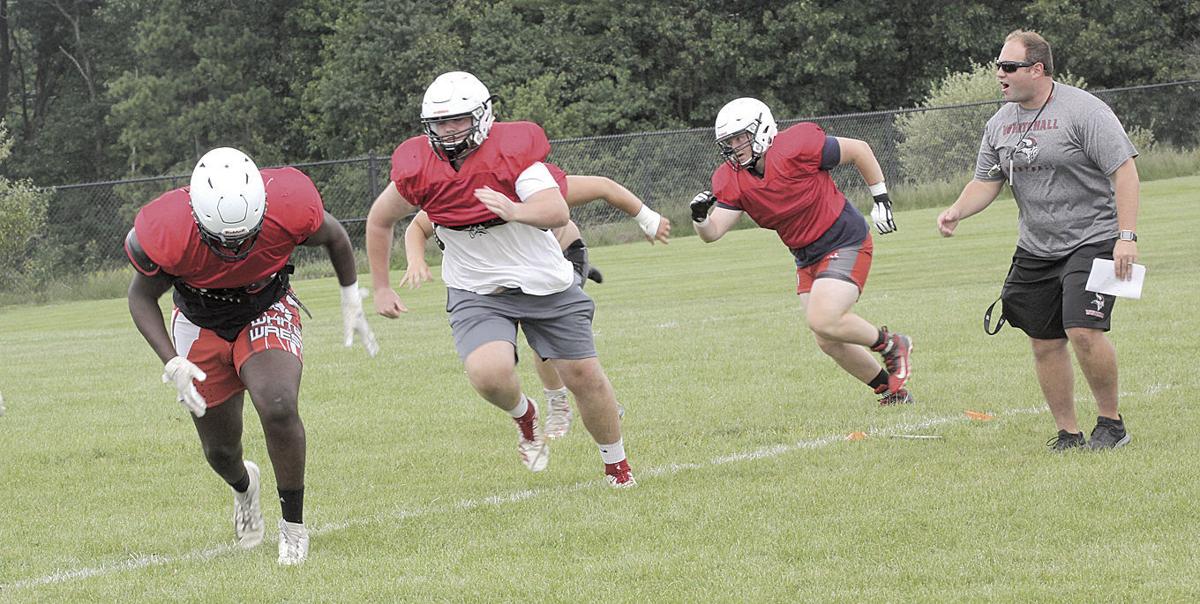 Whitehall coach Tony Sigmon (right) fires up his players during a running drill Thursday at the team’s practice. The Vikings went 8-3 last year and want more this season. 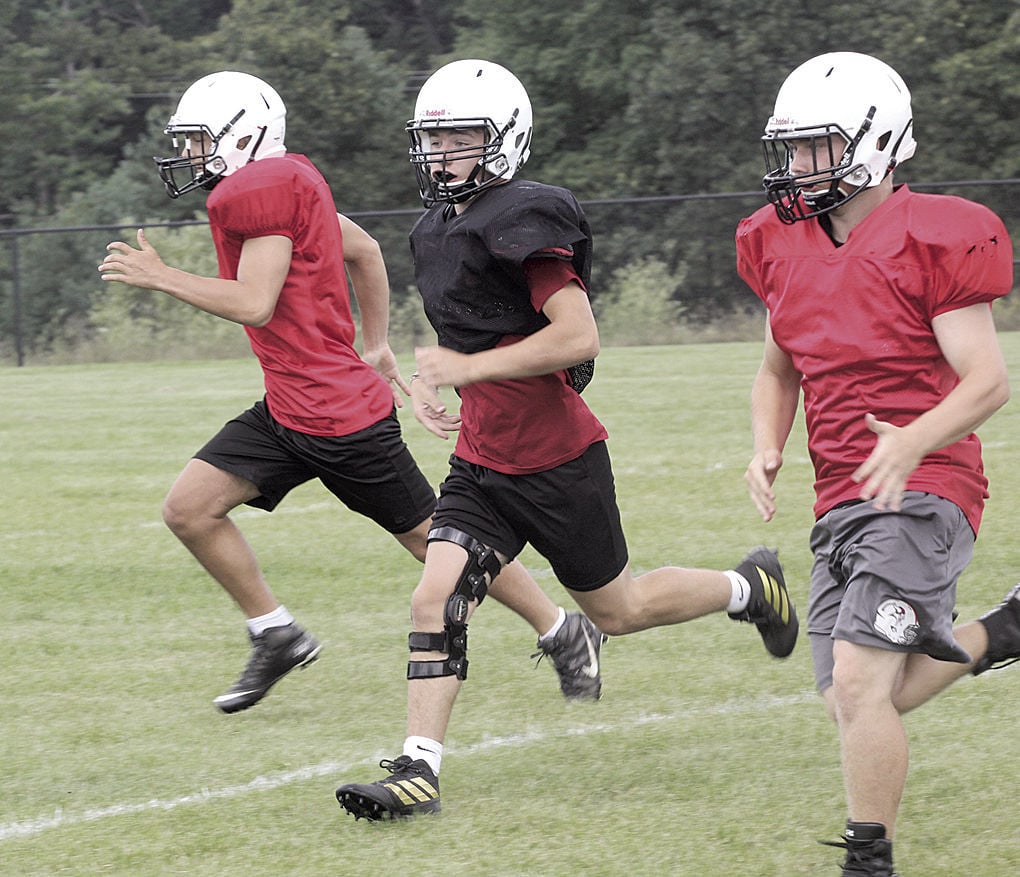 Whitehall players take off running during a drill at Thursday's football practice. 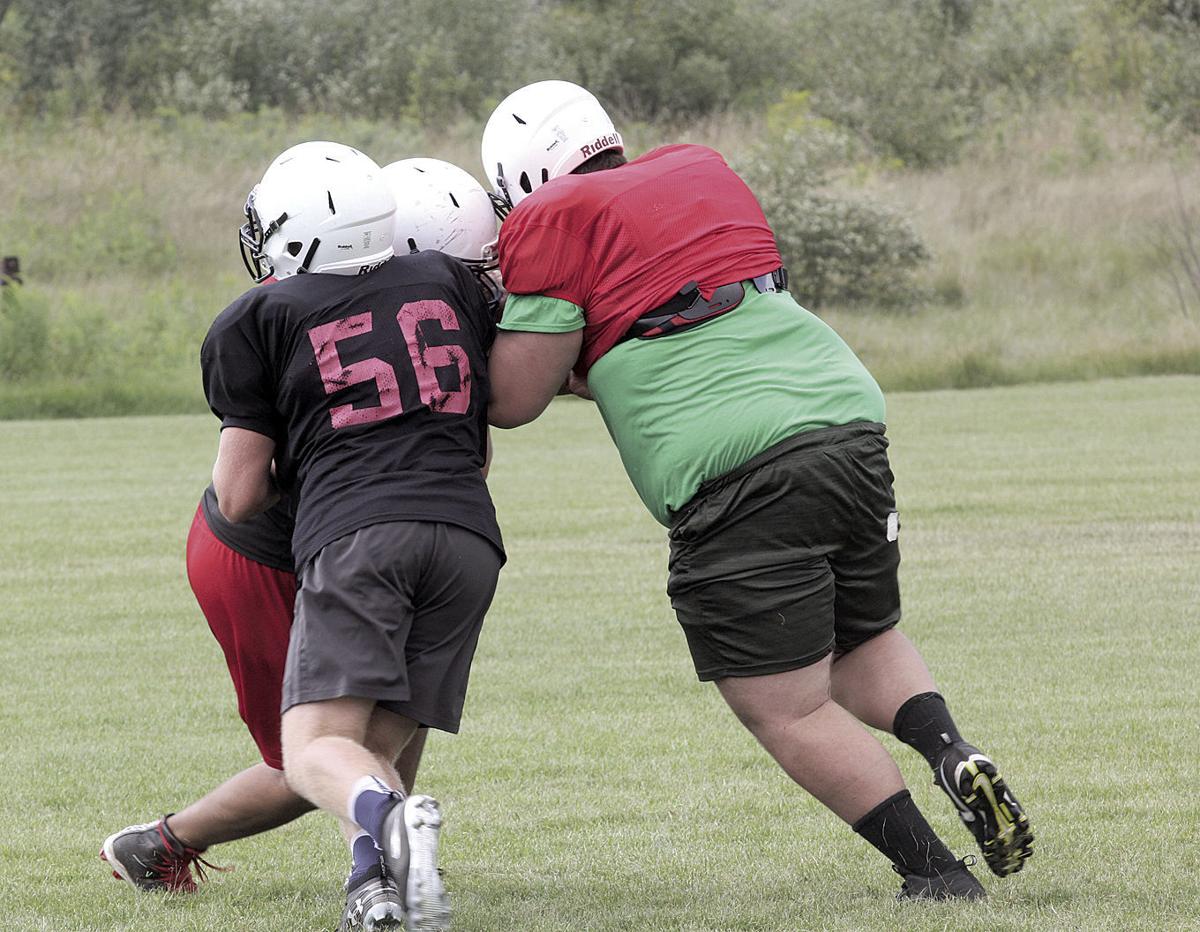 Whitehall linemen pop the pads during a drill Thursday at football practice. The Vikings’ line will be key to their success in 2019.

Whitehall coach Tony Sigmon (right) fires up his players during a running drill Thursday at the team’s practice. The Vikings went 8-3 last year and want more this season.

Whitehall players take off running during a drill at Thursday's football practice.

Whitehall linemen pop the pads during a drill Thursday at football practice. The Vikings’ line will be key to their success in 2019.

WHITEHALL — For Whitehall, more so even than most teams, it’s always started at the line of scrimmage. Coming off an eight-win 2018, seventh-year coach Tony Sigmon thinks his front lines could be special, and the first thing that makes that case is simply the players’ physical stature.

“This is physically the biggest team we’ve had across the board, so I’m interested to see what that looks like,” Sigmon said. “I think when we get into the strength of our conference, the teams that are dynamic, have excellent offensive and defensive linemen. They always have...I think that’s going to be a big deal for us. This is probably the first time we’ve been able to match up across the board with some of the more traditional powers in our conference from a size perspective.”

Three returning linemen in particular should lead that all-important unit, led by Jarrean Sargent, who plans to again be a terror to opposing backfields after racking up 12.5 tackles for loss a season ago. He’ll be joined by Hayden Brown, who had 4.5 sacks in 2018, and Alex Britton, who started every game at center for the Vikes last season.

“That’s a really good place to start,” Sigmon said of his top lineman trio. “We’ve had some nice depth and progression.”

Whitehall has started a senior at quarterback for four straight years, including Gavin Schaeffer last season, but a summer of tough off-season work has led to junior Andrew Durbin emerging as the likely starting signal-caller this year. Durbin, the tallest quarterback Sigmon’s had at Whitehall, was the JV quarterback last year and Sigmon is confident his experience running the veer at that level will pay off.

“He’s taken the load when it comes to camp and 7-on-7’s, and he’s done a really nice job,” Sigmon said of Durbin. “He’s done a lot in the off-season, a lot of extra stuff, going to camps, working on how to throw, working with mechanics and things like that. It’ll be interesting to see (how) a kid that’s invested that kind of off-season transitions into his junior year.”

Besides a good line, any quarterback’s best friend is a dynamic running back, and Durbin certainly has that in senior Kayleb Venema. As the clear feature back last season, Venema ran for nearly 1,100 yards, averaging over six yards per attempt, and scored 16 touchdowns. (He’s also a force on the defensive end, with 49 tackles, including 11 for loss, and an interception in 2018.) Sigmon said Venema is in line for another big year this season, but what’s really impressed him early in the season is the senior’s willingness to be a leader on the field as well.

“What’s really cool is how he’s working with the underclassmen,” Sigmon said. “He’s not a rah-rah guy, but what he is, is a guy who will take you off to the side after a younger guy will get a rep, and you’ll hear him say, ‘Hey, your path needs to be here,’ ‘You need to be a little tighter with the mesh, ‘You need to make sure you’re getting out on the block in this type of scheme.’ That’s actually been as fun to watch as a coach (as what he does on the field), because for him now, it’s not just about having a great senior year, but how’s he going to leave the program?...I think he’s doing a great job leading the program to a better place.”

The toughest player to replace from the 2018 team might be Terrell Harris, who played all over the field for the Vikings last year and carried the team in its district finals loss to Grand Rapids Catholic Central. Harris, now at Hope College along with Schaeffer, is not the sort of player one guy can replace, but Sigmon said a couple of returning seniors could combine to fill that gap. Kyler Honore has already displayed dynamic ability on the defensive end, having picked off nine passes last year, including three against Montague, en route to all-state honors. DJ Wright, already a familiar name in the Whitehall lineup, has a chance to emerge into that kind of role as well.

“I don’t know if there’s one person that’s better than the next when it comes to this team,” Sigmon said. “We just have really good, quality kids this season. I think that’s going to really pay dividends for us.”

One up-and-comer to watch for, especially on defense, is Matt MacArthur. The younger brother of former Viking athletes Jack and Emily MacArthur saw some time last season but should be a major factor this fall.

“He did a nice job for us at a lot of places here and there (last year),” Sigmon said. “He’s really been playing different, and I mean that in a good way. Things just seem easier for him this year, so that’s exciting.”

Whitehall continues its aggressive scheduling philosophy this year. Out of the conference, the Vikings will play road tilts with 2019 Division 3 district champ Parma Western and D-6 semifinalist Montrose. The Vikes are naturally gunning for Oakridge and Montague in the West Michigan Conference, both of whom they get at home this year, but North Muskegon, which made the playoffs last year, and Ravenna, which came close, could also have something to say about the race.

“If our attention to detail week in and week out (isn’t consistent), it’s not going to be Oakridge or Montague that beats us, it will be another team that beats us, because we have this pedestal type of mentality for one or two games, which means we devalue the other ones,” Sigmon said.