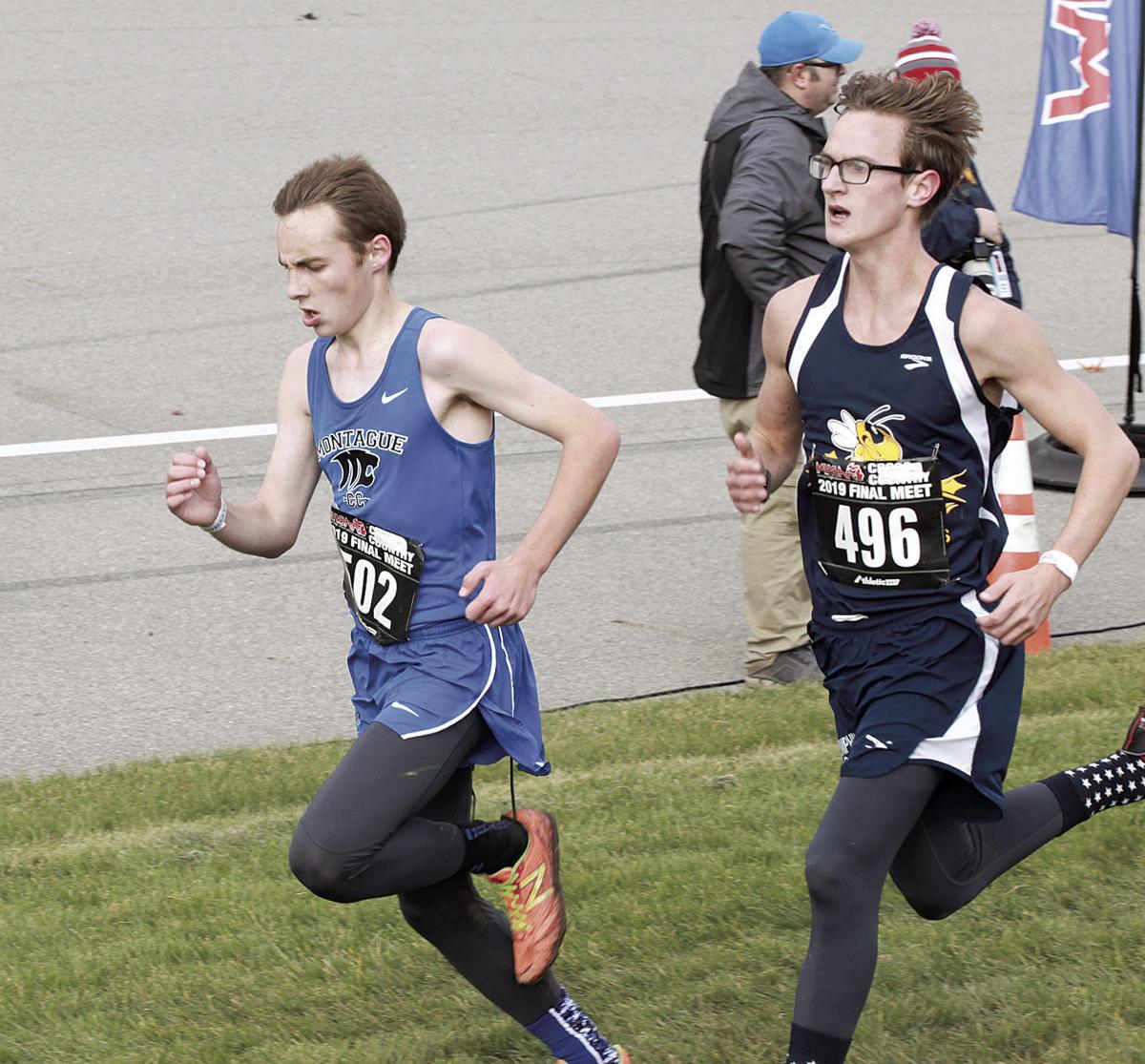 Montague’s Conner Raeth (left) tries to hold off a late surge from Memphis’ Jake Thomas during the 2019 state cross-country finals at Michigan International Speedway. Raeth hopes to help the Wildcats return to the state finals this fall. 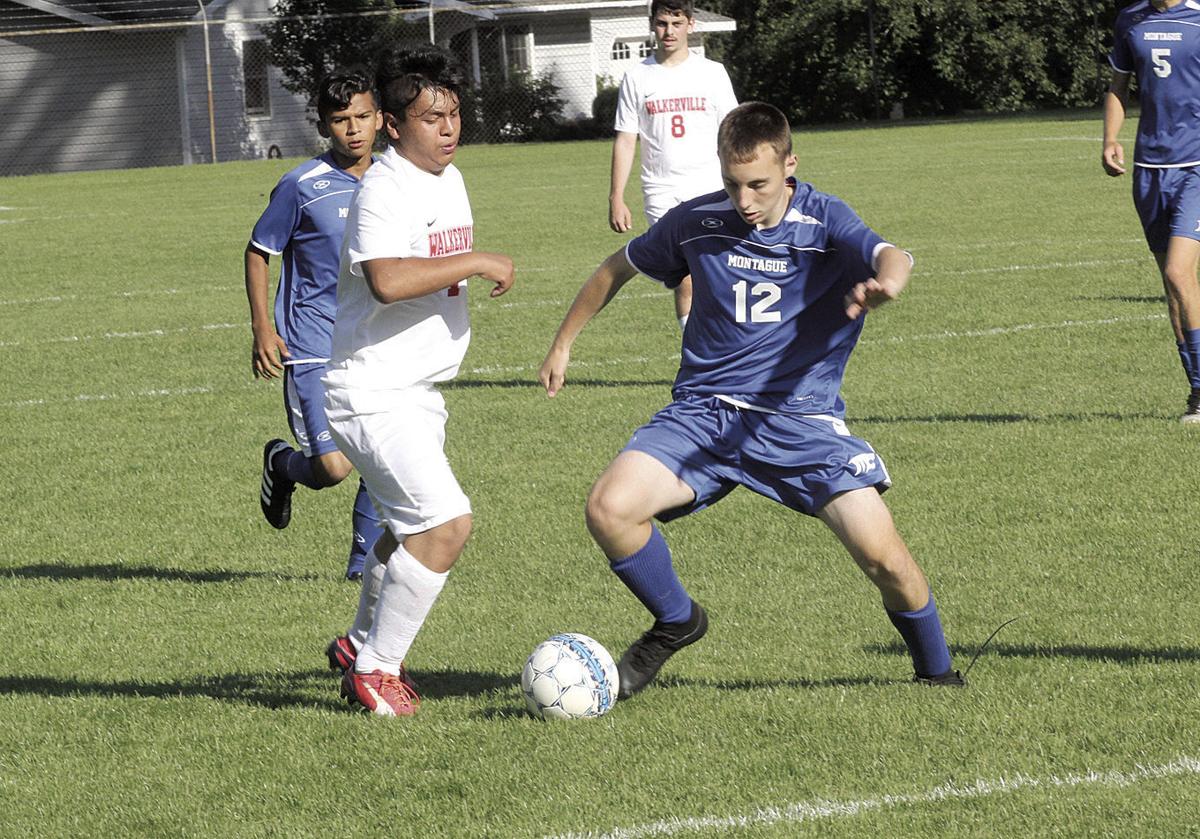 Montague’s Conner Raeth (right) fields the ball during a 2019 soccer game against Walkerville. Raeth has played several sports for Montague and hasn’t let heart surgery slow him down.

Montague’s Conner Raeth (left) tries to hold off a late surge from Memphis’ Jake Thomas during the 2019 state cross-country finals at Michigan International Speedway. Raeth hopes to help the Wildcats return to the state finals this fall.

Montague’s Conner Raeth (right) fields the ball during a 2019 soccer game against Walkerville. Raeth has played several sports for Montague and hasn’t let heart surgery slow him down.

Montague senior-to-be Conner Raeth lived most of his first 16 years aware that he would eventually have to have open-heart surgery. He just didn’t want to hear that he’d need it when he did.

Raeth was poised to enjoy his first full varsity basketball campaign in 2021, having just made the team, when his parents Brent and Kara received a phone call from his doctor. The doctor informed them that Conner’s aortal wall had thinned in his heart and that he would need the surgery, which had previously been assumed to be coming decades later, as soon as possible.

Conner’s congenital heart defect was discovered soon after he turned one; it prevented his heart from delivering adequate blood flow to his lower extremities. Quick thinking from his mom may have saved his life the day he had a seizure in his car seat; she grabbed him and initiated rescue breathing within seconds while Brent raced to the hospital.

A heart surgery followed, and within weeks Conner was back to normal. Outside of needing extra annual doctor’s appointments, all was well, and Conner was permitted to play sports without restrictions, and he gladly did so. In addition to basketball, Raeth currently plays golf and runs cross-country, and he’s also run track and played soccer in the past. However, when the sudden need for surgery arose in January, that was thrown into question.

“I think the shock for Conner, and probably for us too, was that it went pretty quickly from being OK to the surgery being right now,” Brent Raeth said. “He’d just made the team, and they were like, ‘You have to have surgery.’”

It was lousy timing for Conner in that respect, but in one very large way the timing might have been fortuitous. The only reason Raeth’s need for surgery became clear before basketball season began was the winter sports season’s three-month delay due to the second wave of COVID-19 cases that swept the country in the fall. Had the calendar unfolded as usual, Raeth’s annual appointment would’ve taken place months after basketball season had begun.

“He probably wishes that would’ve happened,” Brent said with a laugh, “but he’d have had a good three months in with a thin aortal wall. The fact that it did get pushed back, they hadn’t competed yet, so for us it was a bit of a blessing that they caught it before something happened.”

Fortunately, Conner’s surgery was a success, but obviously basketball was out. The Wildcats, who ended up losing presumed top player Tate Stine to season-ending injury the day of their opener, would likely have loved to have Raeth available as backcourt depth. Conner would’ve loved to have been playing varsity, especially when younger brother Owen was called up late in the season and had a big part in the Wildcats’ dramatic district win over Oakridge. But it wasn’t to be.

Even away from his teammates, though, Conner was invested in the season, watching games in the hospital through the live streams his father’s company, CatchMark Technologies, provided. He received care packages from the JV girls basketball team and plenty of visits and well wishes from teammates across his sports. It wasn’t long, though, until he began thinking about the golf season.

“The first thing I thought was, will I play golf?” Conner said. “Will I be able to run cross in the fall? I prepared for how that season might look or if we’d have a spring season.”

Luckily for Conner, the spring season worked out well. Apart from a one-week delay to account for the postponed winter tournaments, spring sports went off as scheduled, and he was cleared to play golf after spring break.

Without a full off-season of preparation, the season didn’t always go smoothly for him, but as it went along, Conner began to find his form. He also got to enjoy being on the team with Owen after missing out on that chance during basketball season.

“That first meet I came back, I was everywhere,” Conner said. “I’d hit a shot 10 miles right, then 10 miles left, then a good shot, then miss four putts in a row. Once I found my groove, that was where I wanted to be coming into this year. Going from freshman year to this year, it was exactly where I wanted to be. I was much more consistent which was something I lacked in previous years.”

Just getting back on the course, though, was a win. Raeth was not cleared to carry his bag during the season, so he received dispensation to ride in a cart, but he’s since begun carrying his bag again without issues.

He’s also been cleared to play basketball. He’s already joined Montague teammates for a couple of summer tournaments around the state in preparation for the 2021-22 season, his senior year. He hopes to help the Wildcats return to the state meet as a team this year in cross-country after they missed out last fall.

“I can do about anything I was doing before,” Conner said. “Getting my lungs back and back in shape has sucked, but that’s going to come with it.”

In addition to his sports and studies, Conner has been interning at CatchMark since last fall, working in tech support, and has drawn rave reviews from co-workers. He displayed his stubbornness again when he pushed to do his work remotely in order to maintain that internship.

“We’ll throw stuff at (interns) until they seem like they are overwhelmed,” Brent said. “You’d think Conner had been doing this a couple years and had a degree. He fits in. It’s not even like having an intern. We have a couple of other Montague kids like that too.”

As he’s dealt with his health difficulties, Conner has gained fans at Montague, none bigger than his parents. When he was told of his necessary surgery, Conner took it upon himself to inform his coaches and the school rather than allowing his dad to take the lead. His determination to get back into sports hasn’t surprised his parents — Brent said it was clear very early in life that Conner was “stubborn” — but it’s impressed them.

“He’s got to learn things the hard way and he has a strong will on him,” Brent said. “At times it was frustrating raising a kid like that, and you tell yourself over the years that it will come to benefit him at some point. You really saw the maturity and the stubbornness to get back, and the grit. Kids get a bad rap these days, but a lot of kids don’t have that.

“He’s my son, so you have dad goggles, but this is something serious and he persevered through it. It’s probably harder on Kara and me now, watching him run cross, not having those parent gloves where you want to make sure he’s safe.”