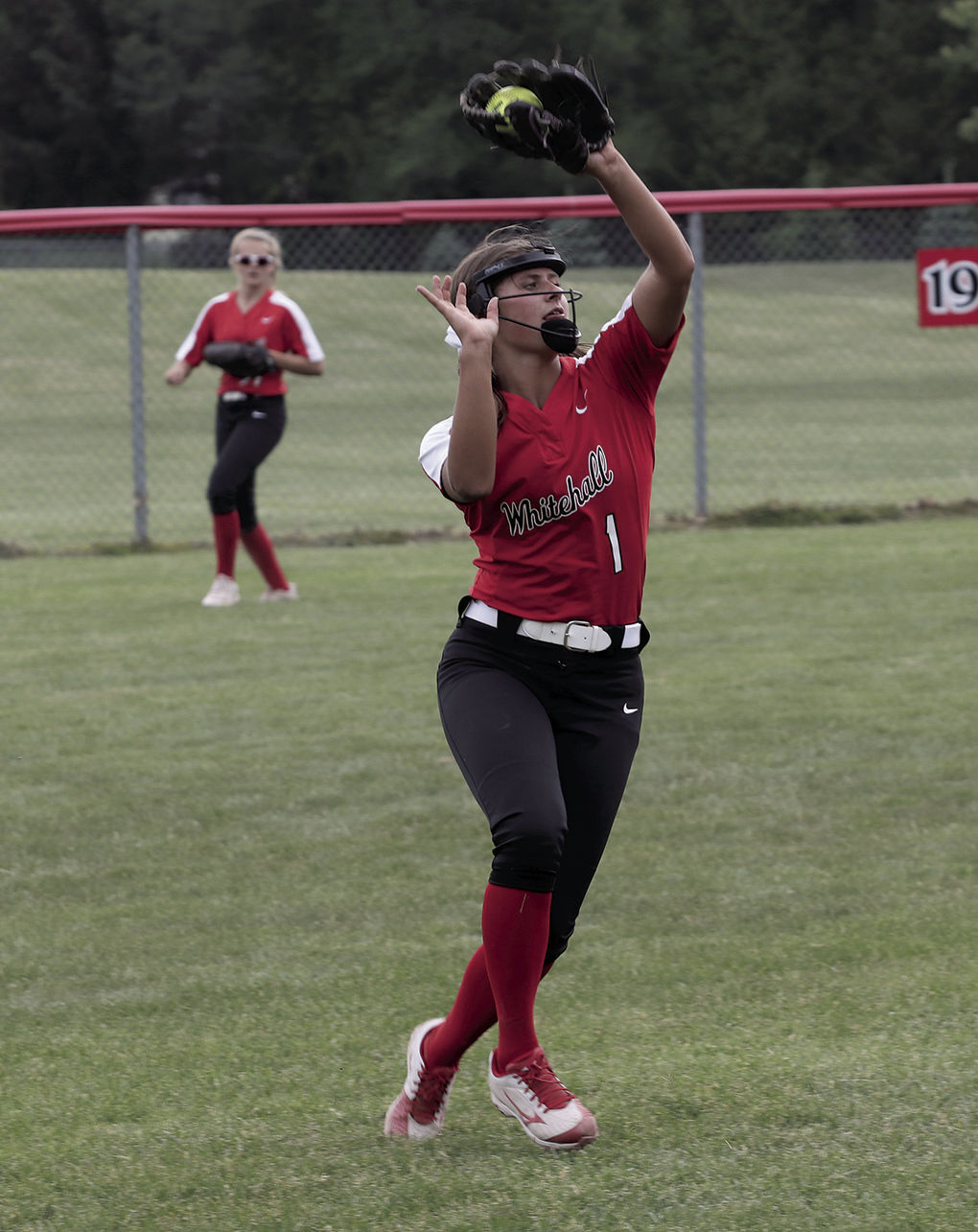 Whitehall’s Kyleigh Martin reels in a pop-up at shortstop during a June doubleheader against Hart. Martin had two RBI in game one of a Vikings sweep. 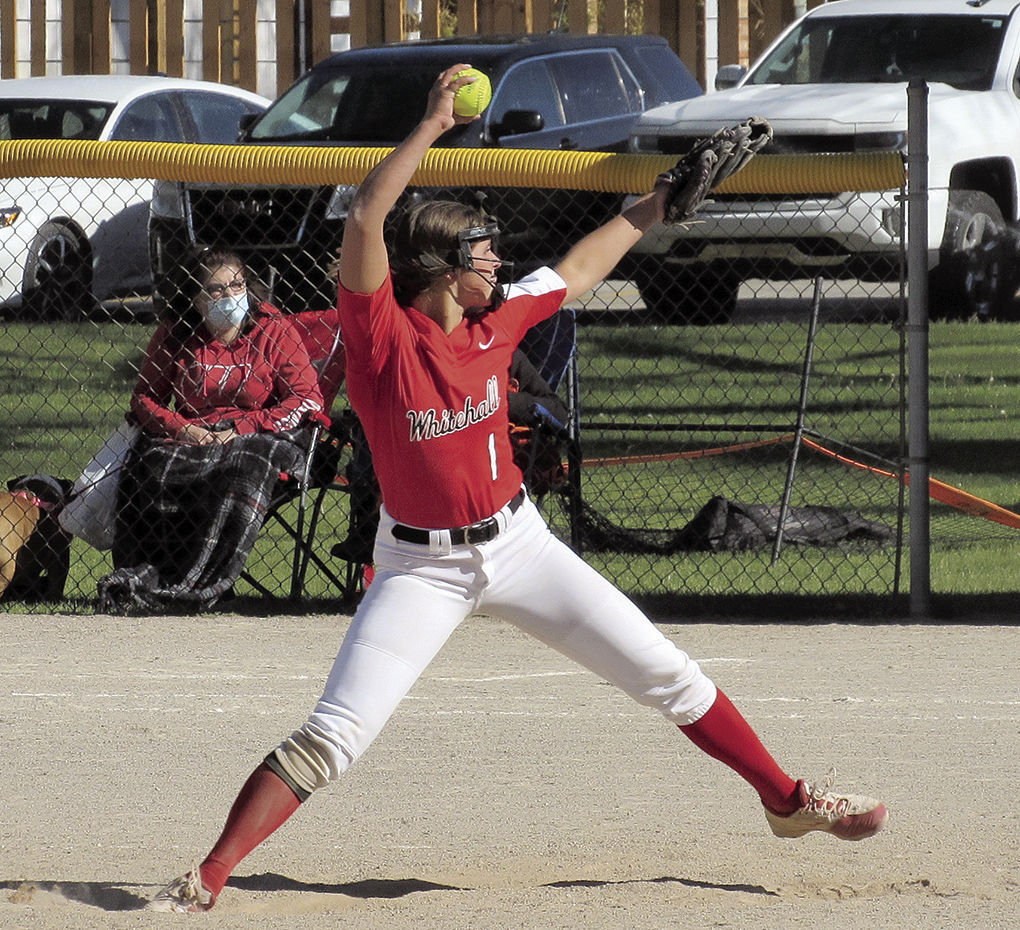 Whitehall’s Kyleigh Martin delivers a pitch during a May doubleheader at Montague. Martin took the circle by necessity this season and proved to be one of the top pitchers in the area.

Whitehall’s Kyleigh Martin reels in a pop-up at shortstop during a June doubleheader against Hart. Martin had two RBI in game one of a Vikings sweep.

Whitehall’s Kyleigh Martin delivers a pitch during a May doubleheader at Montague. Martin took the circle by necessity this season and proved to be one of the top pitchers in the area.

Whitehall senior-to-be Kyleigh Martin is a shortstop. It’s her favorite position, and it’s her best position. In fact, Vikings’ coach Denis Koegel said in conversations with his predecessor Dave Goodrich, Goodrich has said Martin could be the best shortstop he’s ever seen — especially notable because Goodrich’s daughter Katelyn earned that title with the amount of hardware she earned over her four years at Whitehall.

However, in softball especially, it doesn’t matter much how good your shortstop is if you don’t have anyone you can count on to pitch. And that’s how Martin came to be in the circle most of the year for the Vikings, including a dominant performance to deliver the team a district championship over Newaygo in June.

“She’s the type of player who could play any position on the field and be the best player there,” Koegel said. “I even (briefly) played her at first base, and she blew me away with her reaching for balls that some people would miss. She has a willingness to attack any task with anything she’s got. It’s been special to watch.”

Martin’s pitching in 2021 wasn’t a surprise; she has pitched occasionally throughout her softball career, and works with a pitching coach, McKenze Supernaw, who played at Fremont and then Grand Valley State. She was preparing to be one of the team’s hurlers in 2020 as well before the COVID-19 pandemic wiped out the season.

When 2021 rolled around and she was one of just a few returning varsity players (she was a regular in 2019 as a freshman), her task was clear. She was headed to the circle, even if she wasn’t totally thrilled with it.

“I’ve been a pitcher since I was little, but I never liked pitching,” Martin said. “I was disappointed, not to pitch but just that I couldn’t play shortstop. (But) I ended up being super good at it.”

Her baptism at the position was rough, as the Vikings got routed twice in a row by powerhouse Oakridge in their first doubleheader. However, as the season got along, she kept getting better. By the end of the season, she had struck out well over 200 batters, including setting program records for punchouts in both a seven-inning game (16) and a five-inning game (13). She also led the Vikes to that district title, and nearly pitched them past favored Big Rapids in the regional semifinals to boot before they lost a nine-inning thriller 4-3.

Oh, and while she was at it, she was shattering the program’s single-season home run record, too, clubbing 14 dingers to double the previous mark of seven. (The 14 also tied the career record set by older sister Kate.)

It’s not easy to hit a home run in softball due to the sheer size of the ball — far bigger than a baseball. Granted, the field is also smaller to compensate, but it’s still quite a feat. The key, Koegel and Martin said, is bat speed.

“She’s got a fast bat,” Koegel said. “Sometimes it gets to be too fast. I can’t tell you how many home runs she’s hit that went just foul. That gives her a huge advantage. She’s very fit, but she’s not a big-bodied girl. It’s all that bat speed and that timing. She can yank even a changeup and have it soar out. To see some of those balls that go out, it’s been really impressive.”

Of course, Martin being a hitting dynamo was known — it was the main reason she was on the varsity as a freshman along with her older sisters Kate and Emily, after all. She still goes out to the field every day to hit with her dad, Vikings’ assistant coach Kyle Martin. Despite her prior pitching experience at lower levels, how she’d do on the varsity was unknown.

Her success exceeded the expectations of even her middle school coaches, including her dad and Scott Huebler. Her strikeout numbers were impressive, of course, but her control was what stood out; she walked less than a fifth as many batters as she fanned, which Koegel said has “got to be the best ratio we’ve had”.

“She’s been incredible at hitting her spots,” Koegel said. “She can change speeds. I wouldn’t say she’s as overpowering as Oakridge’s (Kaelinn) Jozsa, but she’s great at locating her fastball. That’s where we can take advantage of hitters’ weaknesses. She has a good sense, where she’ll see something that’s working and I won’t. She can work up in the zone or down.”

Martin said her growing confidence as the season progressed was a major factor in her success. This was her first varsity season without her sisters, which added pressure but also enabled her to come into her own as a player.

“Now that they were graduated, and I was a junior and there were only two people that had been on varsity before, I had to lead the way,” Martin said. “Being a leader, I got more comfortable in the box.”

Martin’s leadership wasn’t just shown in the circle or at the plate, but in practice as well. She’s such an experienced player that she often aids Koegel in instructing teammates.

“In the beginning, I was nervous to be like that,” Martin said. “I didn’t want my teammates to think I was bossing them around. But once they saw my successes, they started to see that I know the sport. It was nice to talk to Koegel about the things we can do.”

Martin expects to pitch again next year; after all, players capable of striking out 15 in a district finals win, or go nine innings pitch for pitch against Big Rapids in a regional game, don’t exactly grow on trees. She might, though, get a little more time at shortstop if she has her way, as incoming freshman Megan Leatrea may also vie for playing time at pitcher.

However, no matter what shakes out, she’ll do whatever it takes for the team, especially now that the Vikings have had a taste of postseason success. Illeanna Hatcher and twins Alexis and Alyssa Taylor are all expected back as well, and all three have played travel ball with Martin. They will give Whitehall an impressive veteran core.