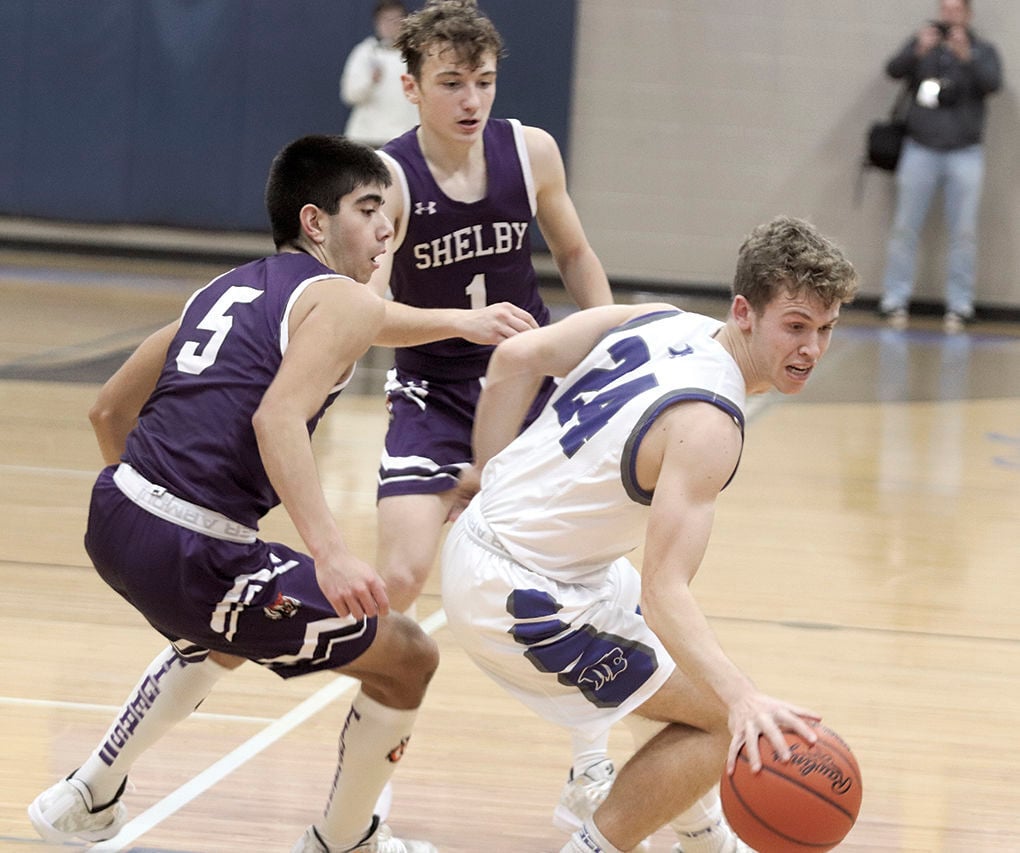 Montague’s Tate Stine (24) maintains handle of the ball while being pressured by Shelby’s Joseph Hayes (5) and Carson Claeys during Thursday’s WMC game at Montague. Stine had 13 points in Montague’s 57-45 win. 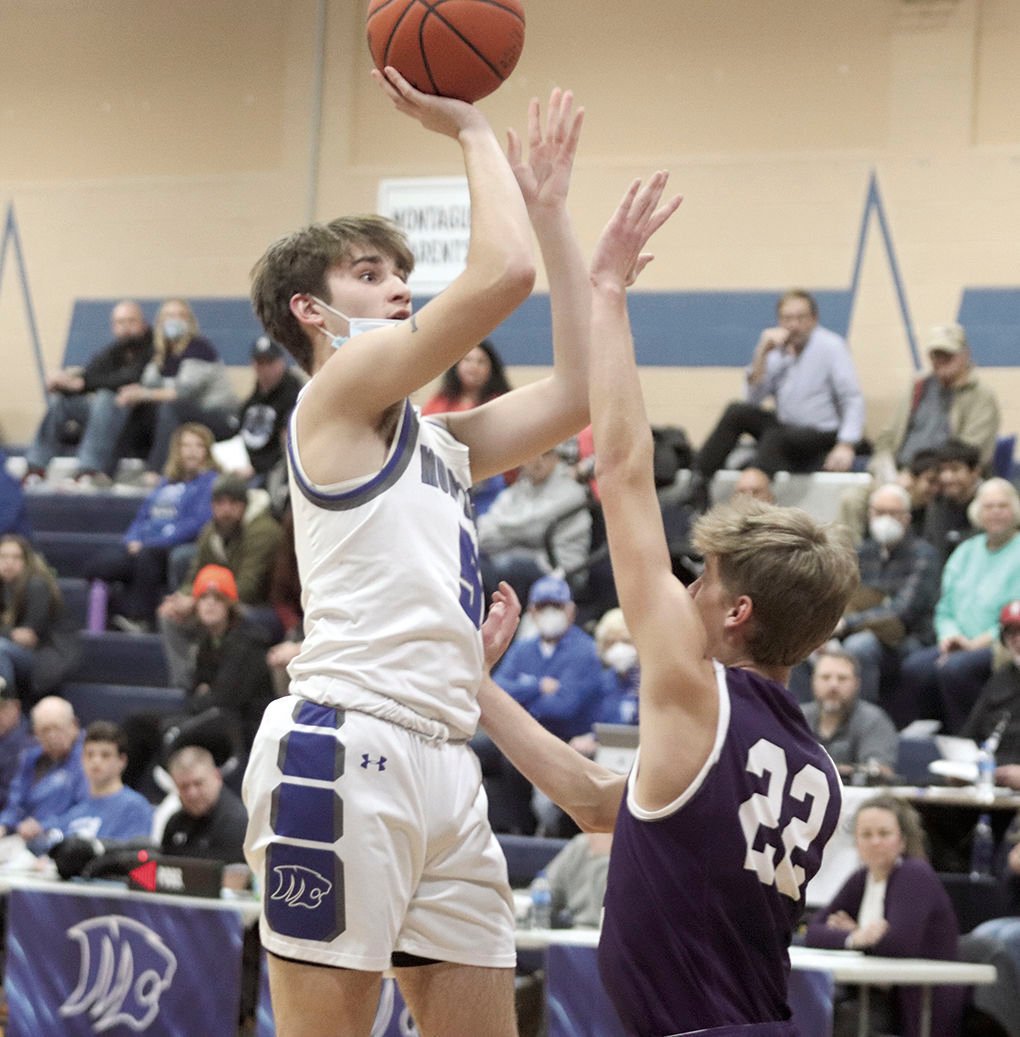 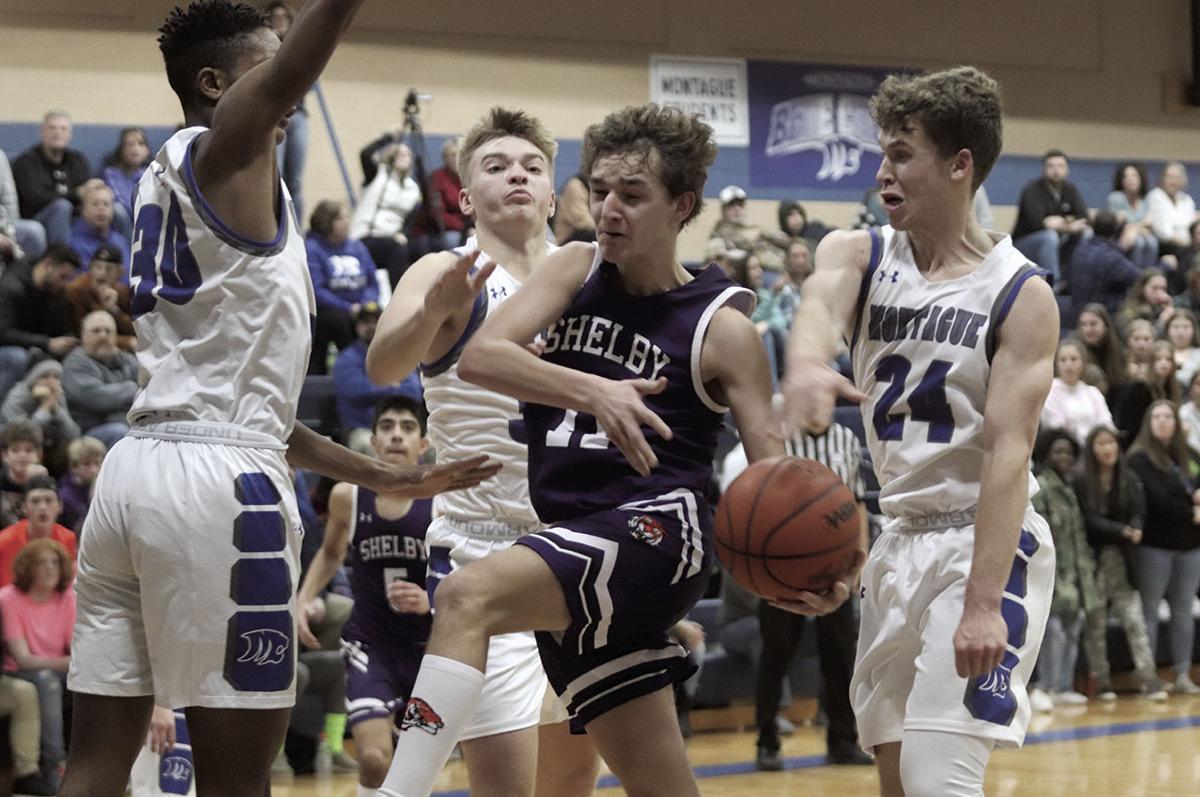 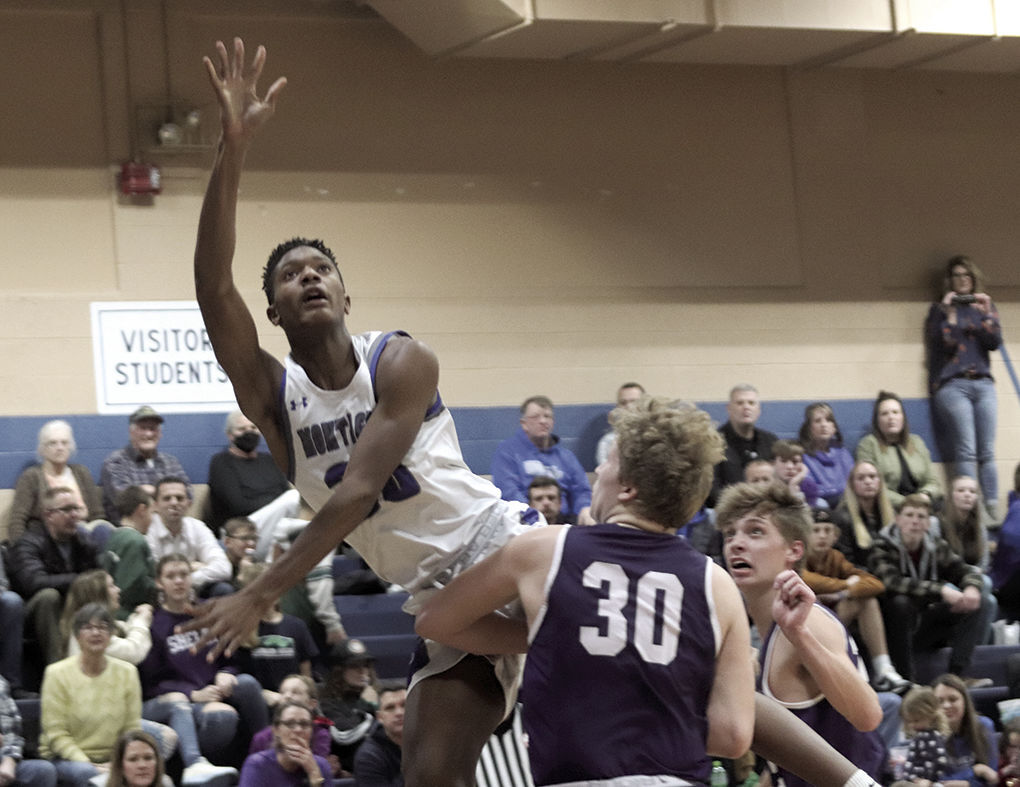 Montague’s Isaiah Atchison (left) is fouled while trying to go up for a shot against Shelby’s Bishop Lee during Thursday’s WMC game at Montague. The Wildcats won, 57-45. 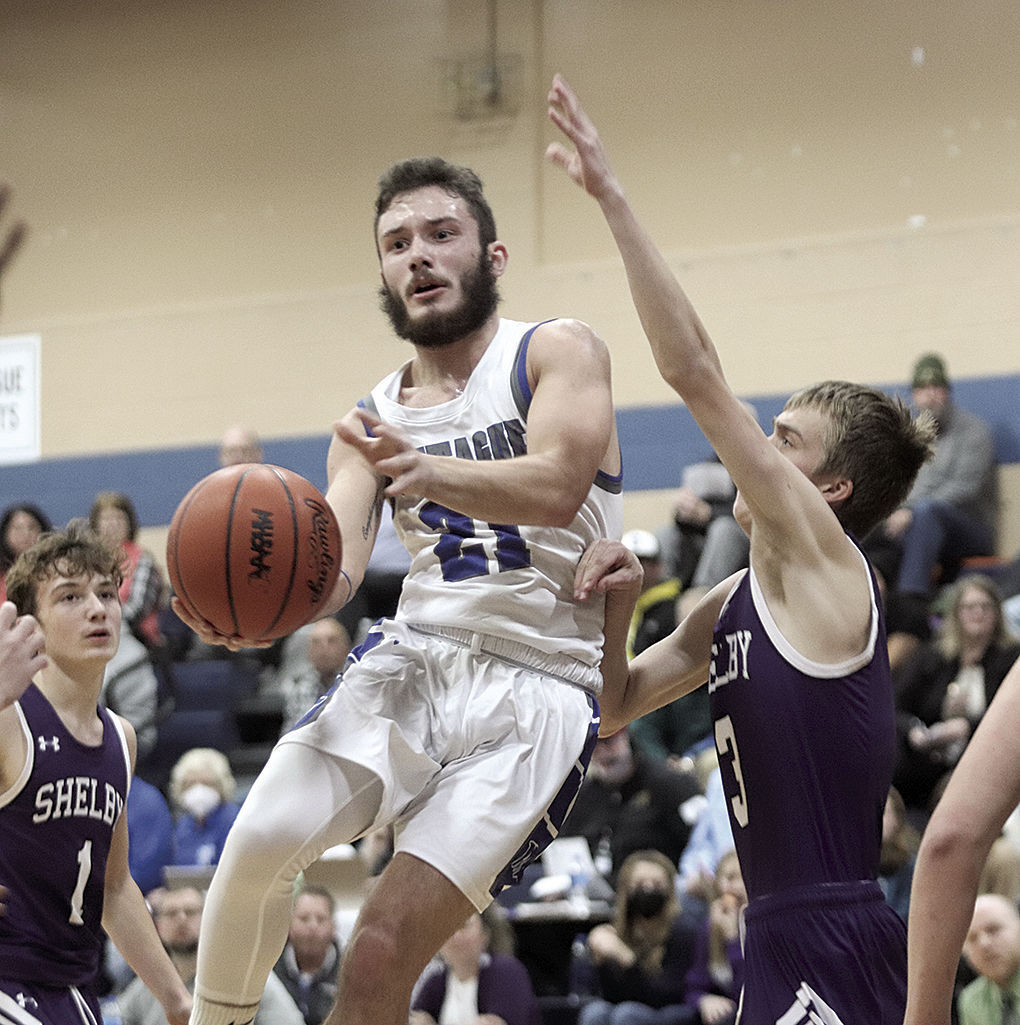 Montague’s Tugg Nichols (21) passes off to a teammate after going airborne during Thursday’s WMC game against Shelby. Nichols had 10 points in Montague’s 57-45 win. 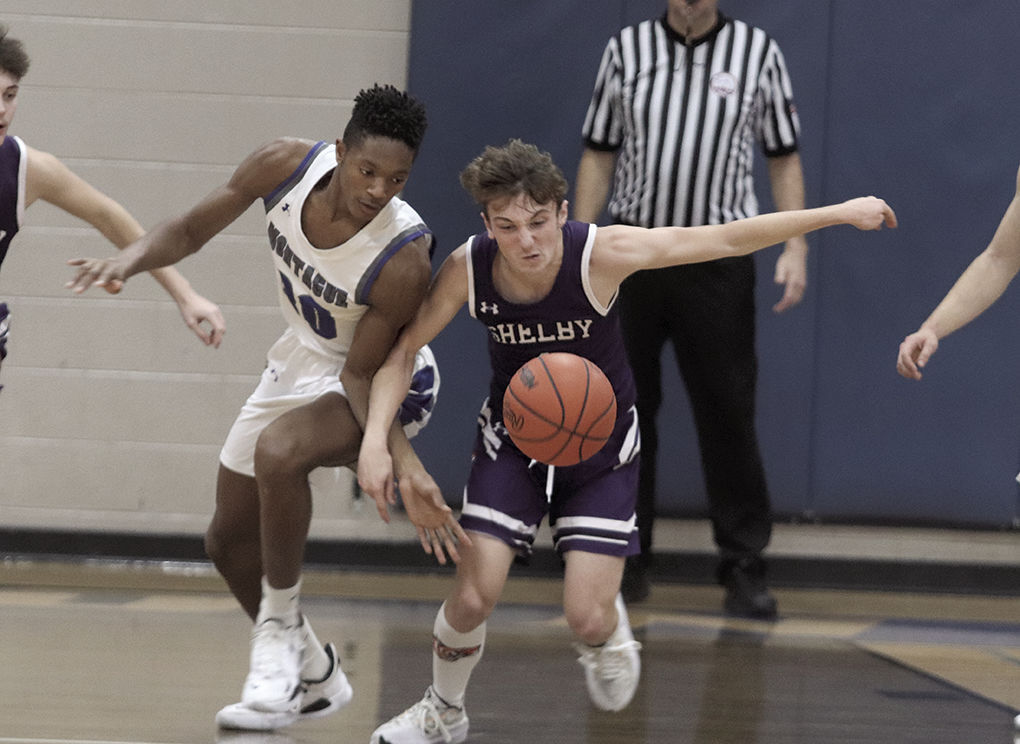 Montague’s Tate Stine (24) maintains handle of the ball while being pressured by Shelby’s Joseph Hayes (5) and Carson Claeys during Thursday’s WMC game at Montague. Stine had 13 points in Montague’s 57-45 win.

Montague’s Isaiah Atchison (left) is fouled while trying to go up for a shot against Shelby’s Bishop Lee during Thursday’s WMC game at Montague. The Wildcats won, 57-45.

Montague’s Tugg Nichols (21) passes off to a teammate after going airborne during Thursday’s WMC game against Shelby. Nichols had 10 points in Montague’s 57-45 win.

MONTAGUE — The West Michigan Conference race already looks as if it will have many twists and turns, but the Montague Wildcats showed that they intend to be part of the ride Thursday night by defeating the league's lone remaining unbeaten, Shelby, by a 57-45 margin.

Montague's post players, who coach David Osborne said he's been challenging of late in a belief he can get more out of them, answered the call in the win, exploiting their size advantages and dominating the paint on both ends.

On defense, Isaiah Atchison was a force, blocking six shots and affecting several others. On offense, Rodney Brassfield grabbed six offensive rebounds and turned them into 10 points for himself.

"We've been pretty hard on our post players," Osborne said. "Rodney Brassfield has really brought some rebounding energy, which has really sparked Isaiah Atchison and Paul Olson too, and Braeden Johnston. Now they're really battling and starting to understand how important those rebounds are. I think their fighting hard in practice is carrying over to the games now."

Osborne said the Wildcats still think they can get more from the sophomore Atchison, who had eight points and eight rebounds on top of those blocks, but "he's getting better every game".

Shelby actually got one more offensive board than Montague, but the Wildcats' were the big ones, especially late in the game, when Montague scored several putback baskets in a row. Colton Blankstrom also hit a three-pointer after one of those offensive boards and scored all seven of his points in a brief stretch from late in the third quarter to early in the fourth.

The game started in Shelby's favor, as the Tigers jumped ahead 7-0 and 9-2, but Montague (4-2, 3-2 WMC) quickly responded with a 17-2 scoring run to go ahead for good. However, the pesky Tigers never did go away, consistently making enough plays to keep the heat on.

"I think our defensive intensity picked up," Osborne said. "We did a good job getting some stops. Shelby always plays really hard and they hung around and hung around. Every time it looked like we'd get something going, we'd turn the ball over or they'd get a stop. We couldn't seem to get over the hump."

"The beginning of the game, they came out with a lot more energy than we came out with, and we had to turn our energy into what we thought (it should be)," Atchison added.

The final few minutes consisted of a parade to the free throw line, and the Wildcats were solid there, hitting 9-of-12 shots in the fourth quarter, 13-of-19 for the game. That, too, was the result of added emphasis after Montague struggled at the charity stripe the previous two games.

"The first two games we played, we shot free throws at 76 or 78 percent, and the next two games we were shooting in the 40s," Osborne said. "We've been putting a little extra time into it and our kids have been staying after and shooting extra. I think it showed up tonight.

"When we did miss a couple free throws, Rodney Brassfield got a couple of big rebounds and putbacks and that was huge for us as well."

Osborne said while the win was a big one in the WMC, it's too early for scoreboard-watching, especially considering how deep the league appears to be. Shelby coach Rick Zoulek said that he can't recall the conference being deeper in his 37 years coaching the Tigers.

"There's going to be a lot of close games, a lot of even teams," Osborne said. "It's obviously important, and one of our goals is to win the conference. But it's too early to tell. A lot of things can happen. I don't think there's a bad team in our league this year."