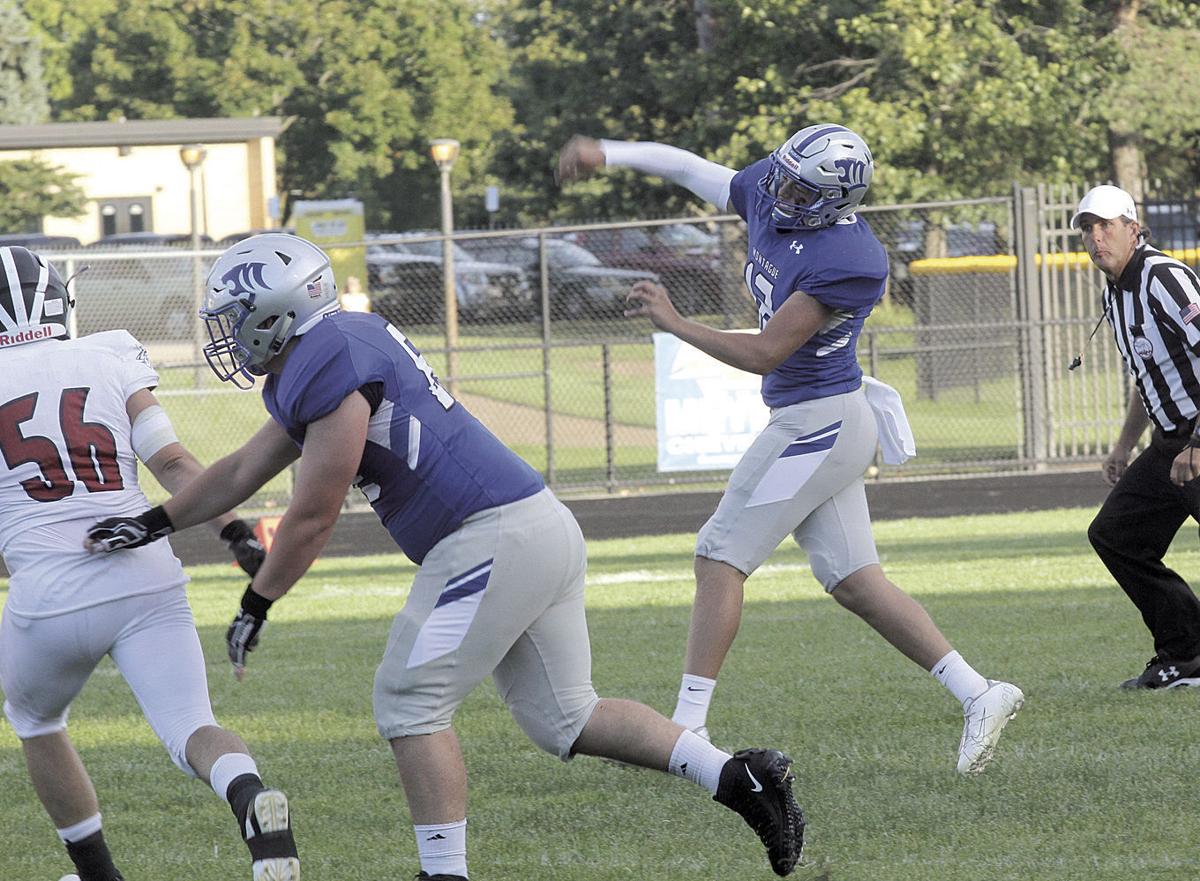 Montague quarterback Drew Collins lets fly on a long pass during last season’s opening football game against Reed City. Collins, an all-state signal-caller, will be the center of attention for the Wildcats this year. 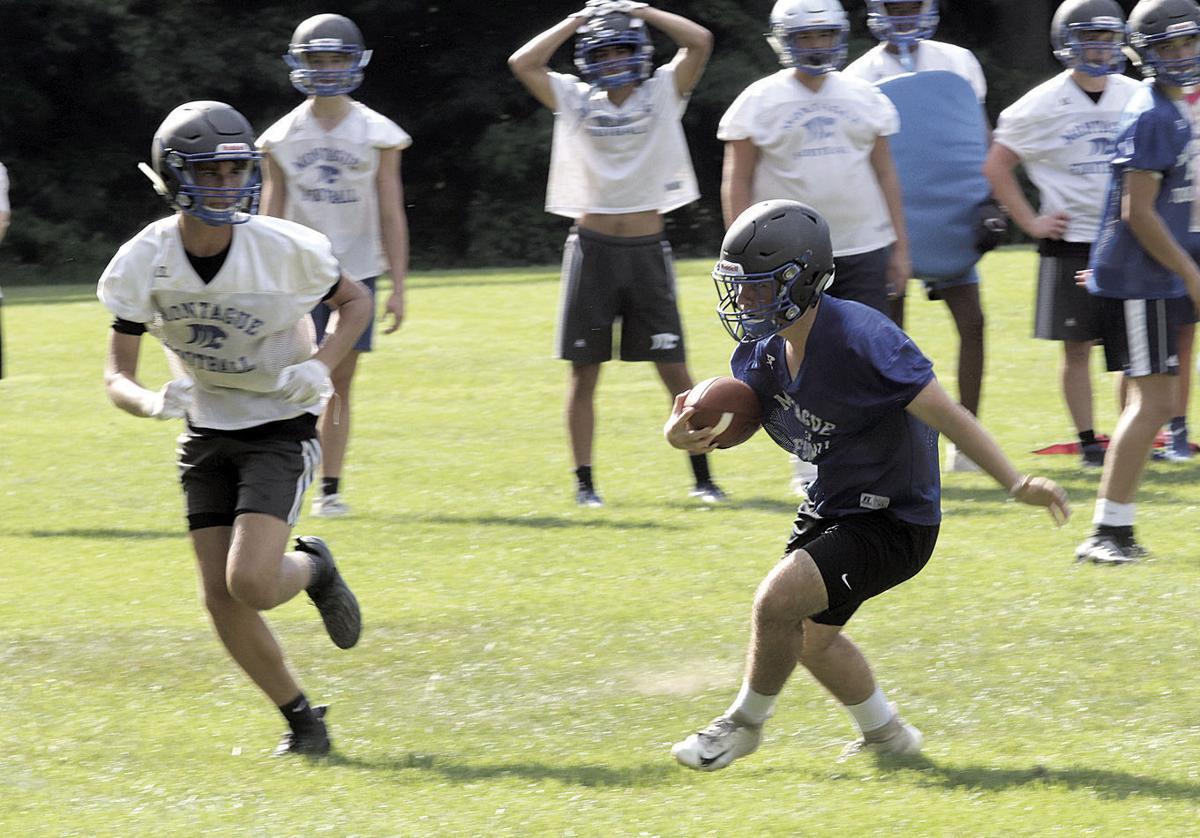 Montague running back Dylan Everett (right) knifes through the defense during a practice in August. Everett is set to be the Wildcats’ featured back again in 2020.

Montague quarterback Drew Collins lets fly on a long pass during last season’s opening football game against Reed City. Collins, an all-state signal-caller, will be the center of attention for the Wildcats this year.

Montague running back Dylan Everett (right) knifes through the defense during a practice in August. Everett is set to be the Wildcats’ featured back again in 2020.

It’s unlikely many teams were hungrier to start the 2020 football season than the Montague Wildcats.

The ‘Cats suffered a heartbreaking overtime defeat last fall in the state semifinals to Glen Lake and, in between quarantines, have spent months since then planning on avenging that defeat. Montague coach Pat Collins said his team hung a picture of their postgame reaction on a tree near the practice field as a reminder.

“There’s been a lot of other things they’ve discussed, playing for the kids that played last year and didn’t get a chance to go to the finals,” Collins said. “They’re motivated. That’s what it’s all about, is playing for each other, and they even go so far as to play for people who aren’t on the field that year, people who were before you and after you.”

Now that the 2020 season is happening, Montague has plenty of reasons to believe it can end in the state finals, as the 2018 squad’s did. Chief among them, of course, is senior quarterback Drew Collins, the coach’s son.

Collins spent his winter in a statewide 7-on-7 league and led his team to a state championship. His performance there and at Montague has led to more collegiate attention, with offers at every level from FCS to Division III. Coach Collins said his son, who was already very much a team leader, has now developed to the point that he’s a de facto coach and can get the team to the right play on offense almost without fail.

The veteran quarterback lost several of his best weapons from last year, including collegiate signees Johnny Monette, Brennan Schwarz and Remington Schneider, as well as Logan Metcalf. The Wildcats do bring back Sam Smith, who played with Collins in that 7-on-7 league and should emerge as a go-to receiver. Montague also returns junior running back Dylan Everett, who took over that job midseason last year and averaged nearly six yards per carry, putting up nearly 1,000 yards of offense. Tugg Nichols and Izac Jarka both saw some action last season as well and should be factors.

“Those guys have to come along, but they’re athletic enough,” Collins said of the Wildcat receiving group. “They just don’t have a lot of experience.”

Montague football pulls off rivalry classic over Whitehall in 2OT

Reeths-Puffer soccer soars past Fruitport in pre-district round

Collins is fond of pointing out that it all starts up front, and there Montague should be in good shape on both sides of the line. Walker Martin, an all-state performer who has committed to Grand Valley State, will spearhead the lines, which return all but one starter. Hayden McDonald, Chris Kessler and Luke Booth are veterans that should help anchor things there.

Alec Waruszewski and Trey Mikkelsen, both seniors, will lead the linebacking corps. Mikkelsen’s dad Randall, who coaches the Wildcat JVs, posted a Tweet the night the MHSAA announced football was back on showing his son in full uniform within a half hour of the announcement. The secondary will be largely new, but Smith, Jarka and Everett each recorded interceptions last season and should see bigger roles.

The Wildcats’ depth has been an issue at times over the past two seasons, but Collins believes his team will be better in that department this season, in part because of a MHSAA rule change that now permits players to play in as many as five quarters of football in a week — which could allow Montague to cycle in some depth from the JV squad.

“We feel like we can put anyone on the field at any given time,” Collins said. “Now you have guys in the JV program that we would call flex players, that have been seeing time in some of our sessions. We’ll do sessions where we put the best defense against the starting offense and get some white shirts in there from our JVs. Some of those guys are potentially Friday night guys.”

Montague had a very tough 2020 schedule lined up, with matchups against Detroit Country Day and Portland, both powerhouse programs, but those non-league games were wiped out by the delay. The Wildcats will instead play six league opponents, not that that will make things much easier; the only WMC team not on the schedule is Mason County Central, a two-win team last year. The ‘Cats will likely compete again with Oakridge, Ravenna and potentially Whitehall for the WMC’s top spot, and North Muskegon has consistently been a tough out, with three of the teams’ last five matchups decided by one possession.

Of course, like everyone else in the state, for Montague, just getting to play is victory enough to start things off.

“Some of the young guys and the inexperienced guys are doing really well and learning quite a bit, we feel,” Collins said. “We’re happy, and we just want to play.”