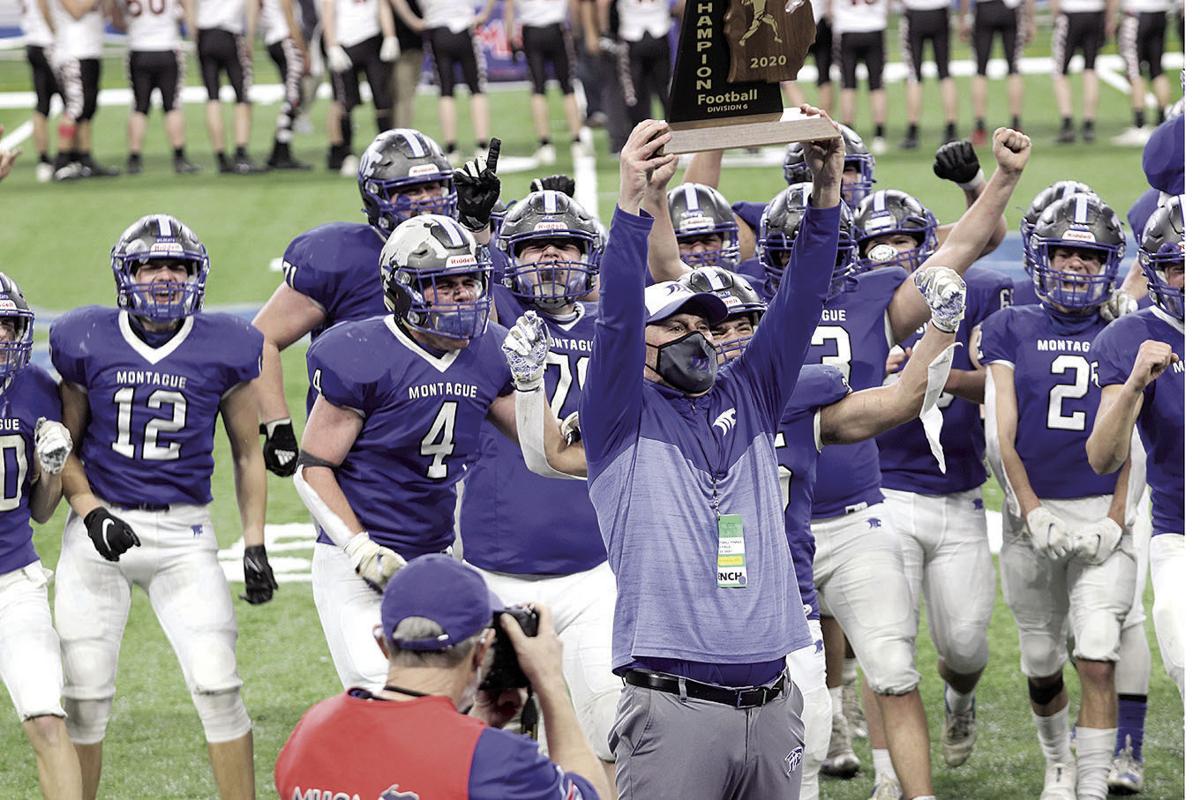 Montague coach Pat Collins (center) hoists the championship trophy as his players begin to swarm him after the Wildcats’ 40-14 state finals win in January. Collins announced his resignation as coach Friday afternoon. 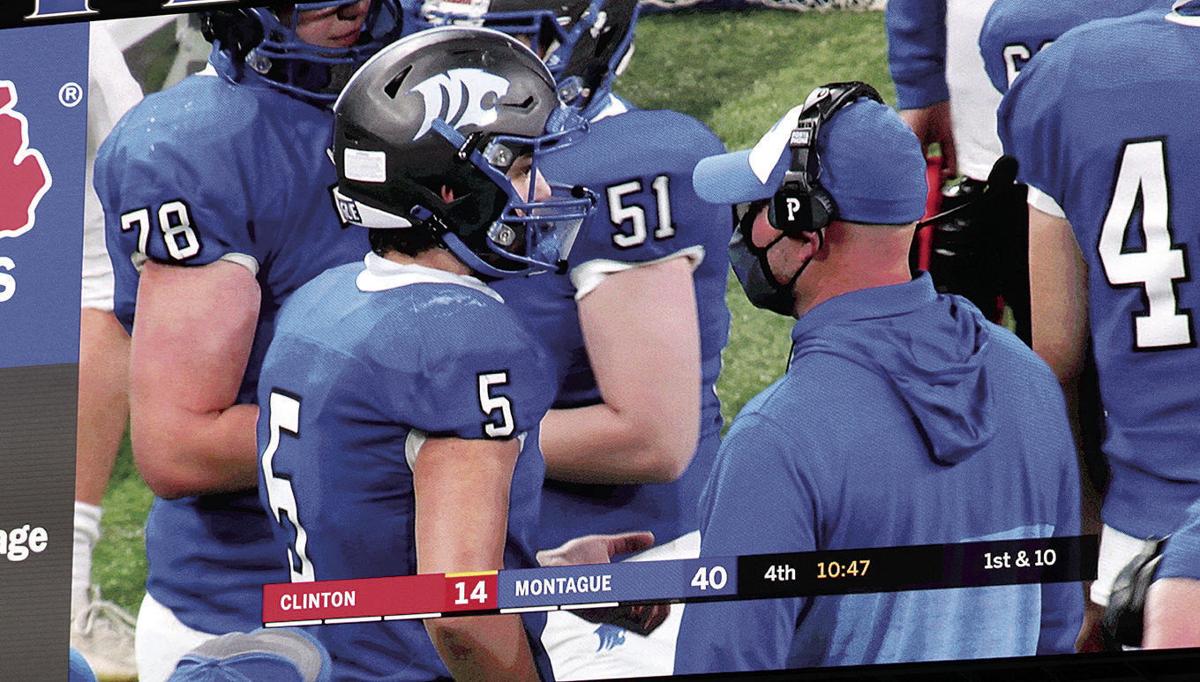 The Fox Sports Detroit telecast captures a meeting between quarterback Drew Collins (left) and his dad, coach Pat Collins, late in the Wildcats' 40-14 win over Clinton. The elder Collins resigned this week as Wildcats' coach after winning his third state title at the helm.

Montague coach Pat Collins (center) hoists the championship trophy as his players begin to swarm him after the Wildcats’ 40-14 state finals win in January. Collins announced his resignation as coach Friday afternoon.

The Fox Sports Detroit telecast captures a meeting between quarterback Drew Collins (left) and his dad, coach Pat Collins, late in the Wildcats' 40-14 win over Clinton. The elder Collins resigned this week as Wildcats' coach after winning his third state title at the helm.

Montague coach Pat Collins joked with then-boss Ken Diamond when he got the Wildcats’ coaching job that there was no way he’d match the 18-year tenure Diamond put in at that position.

It was an exchange Collins found himself reflecting on Friday as he announced his resignation as Wildcats’ coach after 17 seasons - falling just one short of Diamond. In those 17 years, Collins led the ‘Cats to 16 playoff berths, seven regional championships, and three state titles, most recently the one he won a month ago. In storybook fashion, it was his son, AP state player of the year Drew, who quarterbacked the team to the title.

Collins said his decision came down to professional and personal goals. He is in his first year as director of student services for the school district, a program he’s excited about, and personally, he is looking forward to, among other things, watching his two daughters play volleyball. His older daughter, Ally, was a rotation player on the Wildcats’ West Michigan Conference championship team last fall.

“I’ve always tried to strive for great things here as a coach, a teacher and an administrator, but there’s a time to turn the page and challenge yourself in a different way,” Collins said. “I’m not in show mode at all. Like, I’m not just going to chill and relax.”

The idea of stepping aside was in the back of Collins’ mind as he evaluated where he was during the 2020 season, and once the championship was won, he spent some more time thinking. As he said, all the signs pointed to the time being right to move on. It doesn’t necessarily mean he’s done with coaching for good, though.

“For me, it’s about, I get motivated by growth,” Collins said. “I’m not done coaching. I do want to focus on, for now, my professional career and my personal life. I have some goals in those areas I’d like to pursue. When I say ‘professionally’, that could include coaching depending on the situation, just not for now. It’s hard to draw a line in a story like this.

“I want to pursue new goals. The team, this year, inspired me to do that. We told the team, don’t let a state title define you. I can’t say one thing and model another.”

Collins returned to Montague determined to win a state title after reaching the finals as a player in 1992 and falling just short. After accomplishing that goal with current offensive coordinator Cody Kater under center, the team’s performance dipped slightly, but Collins found himself hungry for even more, and his son was part of that.

“Things got a little more difficult, and we were at a moment where, Drew’s rooted, man,” Collins said. “He bleeds blue. He’s as Wildcat as anyone ever, probably, in this town...When you realize how rooted Drew is and your whole family is in loving this community, (you want more), and then in the second round, we rose up and did it again. That cycle could go forever. It’s not my place to keep doing that.”

Collins’ resignation ends a 35-season period that’s seen Montague employ only two head varsity football coaches, a run of continuity that any high school would love to have. What’s more, many members of Collins’ staff have been invested in the Montague football program for the majority of his 17 years as well.

Montague athletic director Jay Mulder, who took over from Collins as AD when Collins took his new position, said he got a feeling, based on his conversations with Collins during the year, that a move was coming. By the time the team reached Ford Field, he was nearly certain it was, and he was proven right.

“We’ve been very fortunate at Montague to have two great coaches in the past three-plus decades, and it shows in our program,” Mulder said. “I think that’s a tribute to Pat, getting a great staff and taking care of his coaches and building great loyalty inside the program...My goal is to find the third one, and maybe they can go 15-plus years.”

Mulder said the school will go through its usual processes for posting a job, just as it would for a coach in another sport or for a teacher. Whoever is next will obviously have big shoes to fill, but if Collins could do it after Diamond’s tenure, perhaps the Wildcats can find another coach who can.

“It’s almost like a storybook career,” Mulder said. “It will be weird come this fall, not seeing Pat on the sidelines. All good things eventually will come to an end.”