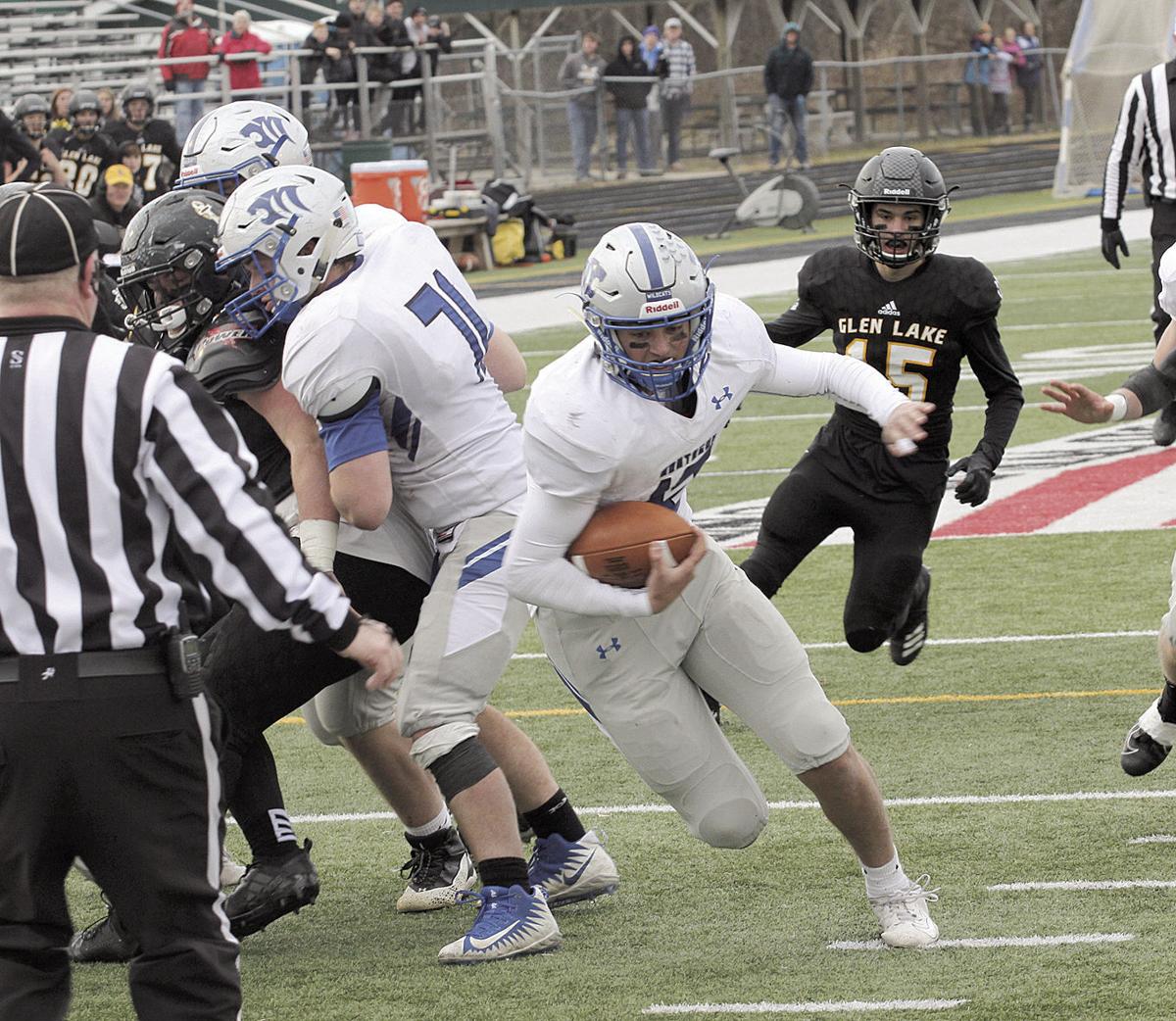 Montague quarterback Drew Collins (with ball) races into the end zone for a touchdown on the second play of overtime during last season’s state semifinal game against Glen Lake. The Wildcats have used their one-point loss in that game as motivation all year long. 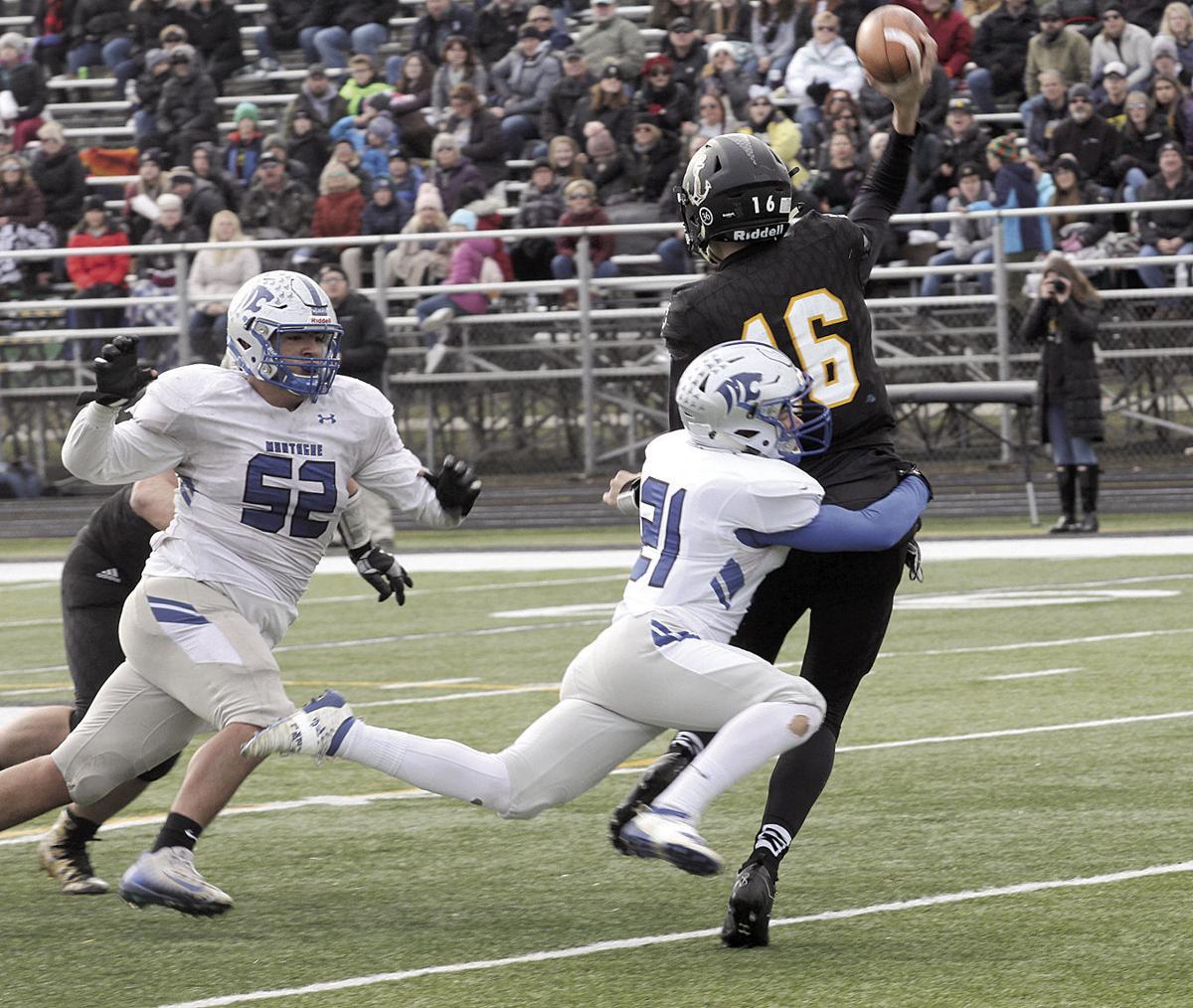 Montague’s Tugg Nichols (21) hits Glen Lake quarterback Reece Hazelton as Hazelton releases the ball during last season’s state semifinal game in Clare. Hayden McDonald is in on the play for Montague. Both Nichols and McDonald are part of a Wildcats’ team intending to reverse the outcome of that game this year.

Montague quarterback Drew Collins (with ball) races into the end zone for a touchdown on the second play of overtime during last season’s state semifinal game against Glen Lake. The Wildcats have used their one-point loss in that game as motivation all year long.

Montague’s Tugg Nichols (21) hits Glen Lake quarterback Reece Hazelton as Hazelton releases the ball during last season’s state semifinal game in Clare. Hayden McDonald is in on the play for Montague. Both Nichols and McDonald are part of a Wildcats’ team intending to reverse the outcome of that game this year.

It’s been nearly 14 months since the Glen Lake game, but the Montague Wildcats still remember the pain of that semifinal loss.

They make themselves remember. A photo of the team’s postgame devastation after the 31-30 Glen Lake win in overtime remains at the school practice field, and the Wildcats pass it each day.

“They’ve pinned this up on the tree, the devastation we had (last year) in this game coming up,” Montague coach Pat Collins said after the Wildcats’ 41-16 win over Montrose last Saturday. “They’ve been motivated for that one thing...Everything they’ve done is to work towards getting back to this, to prove to themselves that they should have won that game. These guys are playing for the seasons before this, that didn’t quite finish the deal, even (the team that played) in the final two years ago. They’re playing for them, too.”

That moment has arrived for Montague (10-0), which was set to face off against Grayling (7-3) this Saturday at 1 p.m. in the semifinals. The winner will take on either Clinton or Constantine for a state title at Ford Field Friday, Jan. 22.

The third straight regional title that Montague won last week is a milestone the program had not hit since the 2005-09 teams won five consecutive such titles and capped it off with repeat state championships. It’s a mark of the work the last few years’ worth of Wildcats have put in — but there’s no time to celebrate when there are more trophies to win. Because as Collins said last week, these Wildcats aren’t just here for the 2020 title, but to make the 2017-19 groups that had their own chances at the big prize feel part of it as well.

“We all work together in this program,” Collins said. “Sometimes when those kids come up short, and they’re leaving the field with a loss as the last game of their high school careers, I tell them in the locker room that they can be proud, because it could potentially make the next year a win to finish their careers. You’re passing the torch. In a one-stoplight town, that’s how it is. You have to work for everything you can get. In order to be great, you almost have to pass it on to the next class.”

Every recent senior class of football players at Montague has earned praise, and this group is no exception. Coach Collins said his seniors have taken ownership of the team to the point that the coaches don’t have to do any motivating.

“This is their team,” Collins said. “I’m very proud of the leadership and the captains and the seniors on down. They just take over. They have a mission. The coaches are here to provide the coaching, to fine-tune what they can’t see. As far as motivation, they take care of it themselves. We don’t have to say much to them. They’re running all those huddles, and all those meetings. They’re the ones talking to each other about what they expect from every person on the team.”

On paper, the Wildcats seemed to be heavy favorites Saturday. First of all, this is Montague’s third straight year in this round, whereas Grayling has never played a semifinal game.

Also, Grayling has played elite teams twice this season — Division 7 semifinalist Traverse City St. Francis and Division 5 district champ Kingsley — and lost decisively both times. But it’s worth noting that those two losses were part of a three-game midseason losing streak, and that Grayling resoundingly avenged the other one of those losses, against Benzie Central, by pounding the Huskies 47-12 in a first-round district game. These Vikings aren’t the ones that were playing in October.

Grayling boasts a fairly balanced offense, but it’s been run-heavy in the postseason thanks to running back David Millikin. The junior back has been a man possessed in the postseason, going for 740 yards on over 10 yards per attempt in his team’s four playoff games, scoring 15 times in that span alone. (268 of those yards came in his team’s 56-26 regional win over Negaunee last week.) For the entire season, he has 29 touchdowns and 1,514 yards rushing, again averaging over 10 yards per carry.

The Vikings can also throw it if needed. Quarterback Hunter Ventline has 15 passing touchdowns and 1,264 yards passing. He averages about 15 pass attempts per game. His top three receivers are Drew Kanary, Anthony Fisher and Dylan Cragg, who have caught 13 of Ventline’s 15 touchdown tosses between them.

Like Montague, many of Grayling’s top offensive stars are two-way players, including Millikin and Kanary, so the defensive matchup will be interesting. Grayling platoons their sizable defensive tackles, including 300-plus pound Logan Collett, to stuff opponents’ run games. Collins may find himself throwing a lot, as he did in last week’s game, which saw him go a perfect 12-of-12 to stake the Wildcats to a huge lead.

With a return to Ford Field at stake and with the memory of last year heavy on their minds, the Montague Wildcats will enter Saturday’s game with all the motivational ammunition they could ever need.

“We’re excited to do this for those other classes and we can’t wait to get after it,” Collins said.