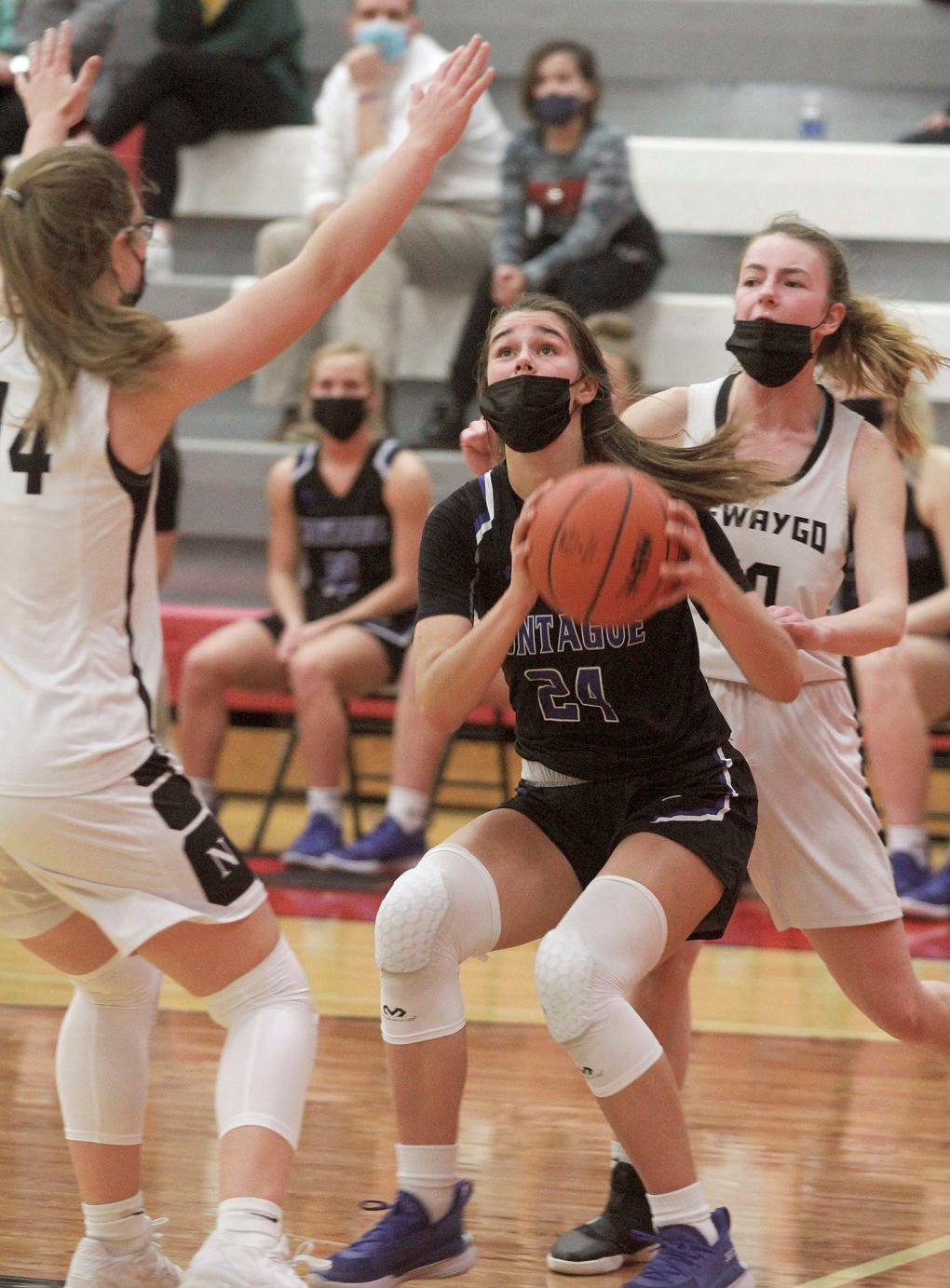 Montague’s Kendall Osborne (24) goes up for a shot during a March regional semifinal game against Newaygo. Osborne is one of Montague’s top returning players, and she’ll be playing for new coach Nick Thaler, who was hired Tuesday. 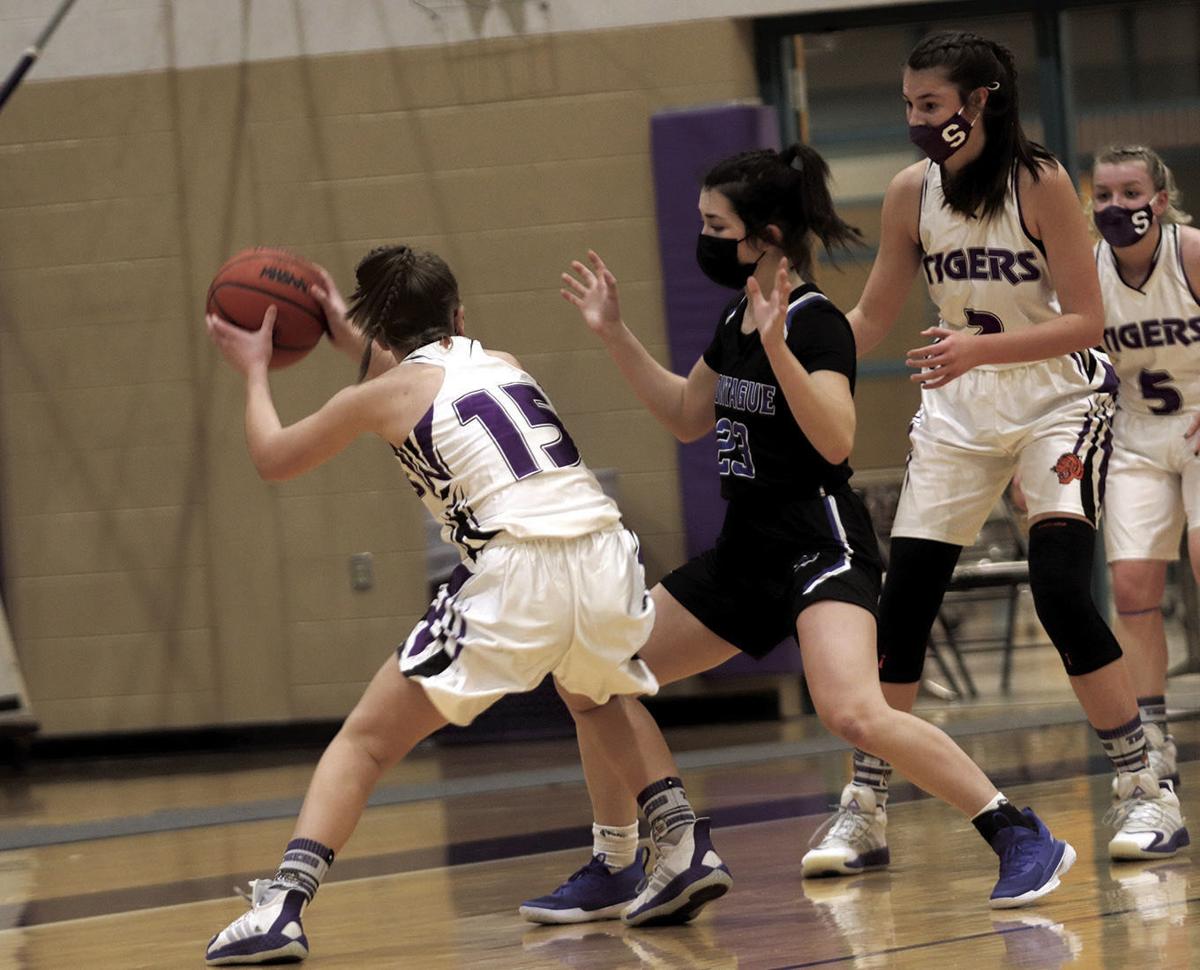 Montague’s Hanna Metcalf (right) defends against Shelby’s Morgan Weirich during a February game at Shelby. Metcalf and the Wildcats have a new coach, Nick Thaler, who was hired Tuesday.

Montague’s Kendall Osborne (24) goes up for a shot during a March regional semifinal game against Newaygo. Osborne is one of Montague’s top returning players, and she’ll be playing for new coach Nick Thaler, who was hired Tuesday.

Montague’s Hanna Metcalf (right) defends against Shelby’s Morgan Weirich during a February game at Shelby. Metcalf and the Wildcats have a new coach, Nick Thaler, who was hired Tuesday.

As it did when it hired Justin Dennett as football coach, Montague is turning to a first-time varsity head coach to lead one of its most successful programs.

The Wildcats announced Tuesday that they would hire Nick Thaler, who’s been a Grand Haven boys basketball assistant coach the past five seasons, sas girls basketball coach. Thaler, who played at Mona Shores before graduating in 2001, led the Buccaneers’ freshman team for two seasons and then the JV squad for three more, but this is his first time getting the keys to the car. It will also be his first time coaching the sport on the girls’ side.

“Those experiences kind of led me to wanting me to be a varsity coach,” Thaler said. “When I was younger, I always thought I’d want to get into coaching if I couldn’t become an elite player. Working with (Grand Haven head) Coach (Greg) Immink and developing with him has been refreshing. I’ve absorbed what he’s taught over the years and I’m going to apply it to these girls.”

Thaler succeeds Cody Kater, who left Montague to become an assistant football coach at Tift County schools in Georgia. The Wildcats had tremendous success under Kater, particularly in the last two seasons, winning consecutive West Michigan Conference championships and earning a district title this past season before falling to eventual state runner-up Newaygo in the regional semifinals.

While many of the top performers from that Wildcats team graduated, Thaler and athletic director Jay Mulder are both bullish on the future of the program.

“I know they lost a lot, but I knew they had some athletes coming back that maybe didn’t get the chance to prove what they had, and that was intriguing to me,” Thaler said.

Mulder said it was challenging to embark on a coaching search at this time of the year, and the school did not get many applicants the first time the job was posted. After he expanded his reach, including taking it to the Basketball Coaches Association of Michigan’s jobs list, the school saw a competitive pool of applicants.

Thaler stood out to Mulder and the hiring committee because of his basketball IQ and devotion to the game. During the interview process, Thaler even got up and started diagramming plays on the board.

Reeths-Puffer soccer begins another district run with win over Ludington

“The offensive and defensive stuff he uses, it was similar to what we’ve been using, so it’ll be a good transition,” Mulder said. “He’s hungry. He’s been an assistant coach at some schools for quite a while, and he was ready to take the next step and become a varsity coach.”

Thaler is a “basketball junkie”, Mulder said, and the coach himself said scouting and figuring out the direction of the game is something he enjoys about the sport.

“What gets me going about basketball is watching other players,” Thaler said. “Girls basketball from high school, college and the pros, (and) the international game. That’s kind of the way the game is going. Learning that aspect of it, I’d (sometimes) never thought of doing certain things in certain situations. I love the scouting aspect of it.”

The new coach said he prefers to go man-to-man on defense and is confident the Wildcats have the athletes to do so. He anticipates a fun and fast-paced team that is happy to get the ball and get moving.

“With the athletes we have and what I’ve seen, we’ll be a team that will be fun to watch,” Thaler said. “We’ll get up and down, push the pace and guard you. I don’t anticipate playing a lot of zone, but if it comes down to it, we may. I think we have the type of athletes that will guard anyone.”

Thaler, who works with children with autism at Grand Haven schools for his day job, has jumped right into his new position, meeting with the Wildcats team Wednesday. He’s also connected with several Montague coaches, particularly boys’ coach David Osborne. Thaler was already familiar with Osborne through friends who, like the Wildcat boys’ coach, teach in the Mona Shores district. In addition, Osborne’s daughter Kendall is projected to be one of the top returning Wildcats in 2021-22.

“It’s ideal,” Thaler said of connecting with veteran Montague coaches. “It’s nice to have a guy that’s been in the program for a while, as a coach and a parent. That can only benefit the program, to be honest.”