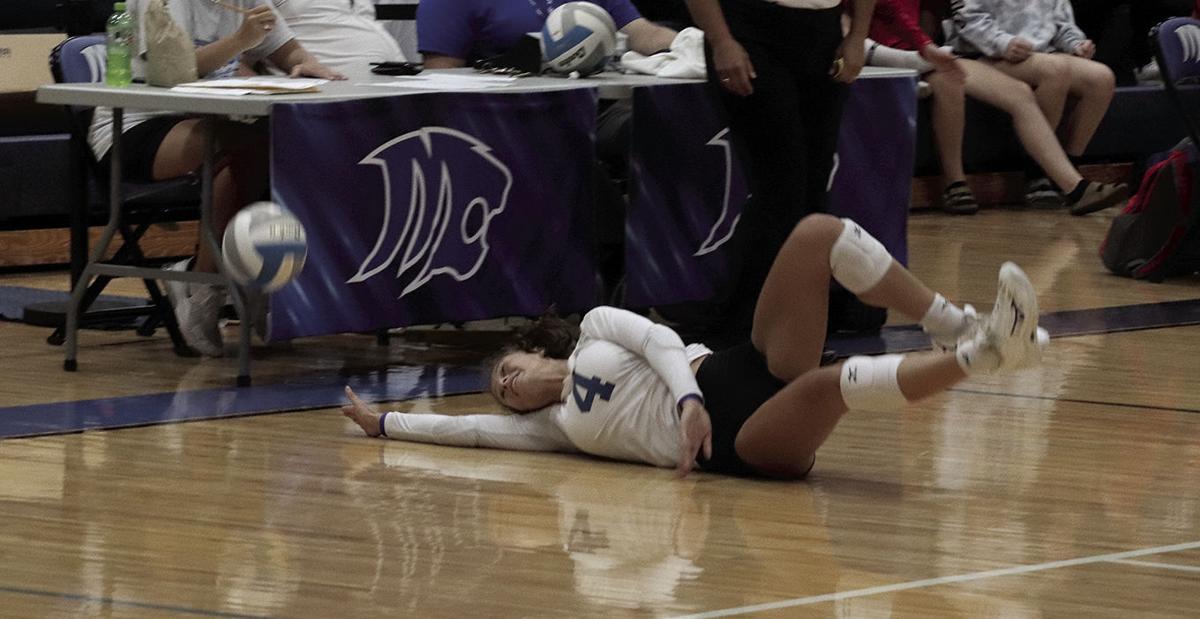 Montague’s Morgan Netcott goes all out in pursuit of the ball during Tuesday’s WMC match against Hart. The Wildcats won, 3-0. 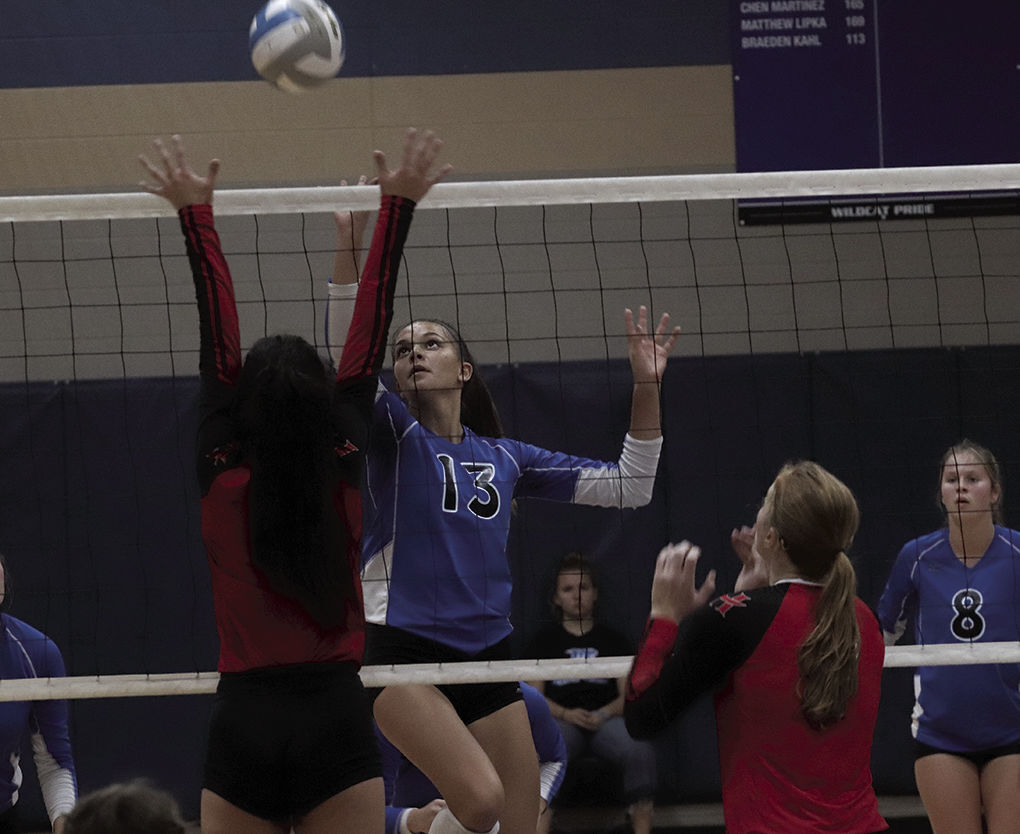 Montague’s Ana Trevino (13) sends the ball over the net at the Hart defense during Tuesday’s WMC match at Montague. Trevino had a solid offensive night in Montague’s 3-0 win. 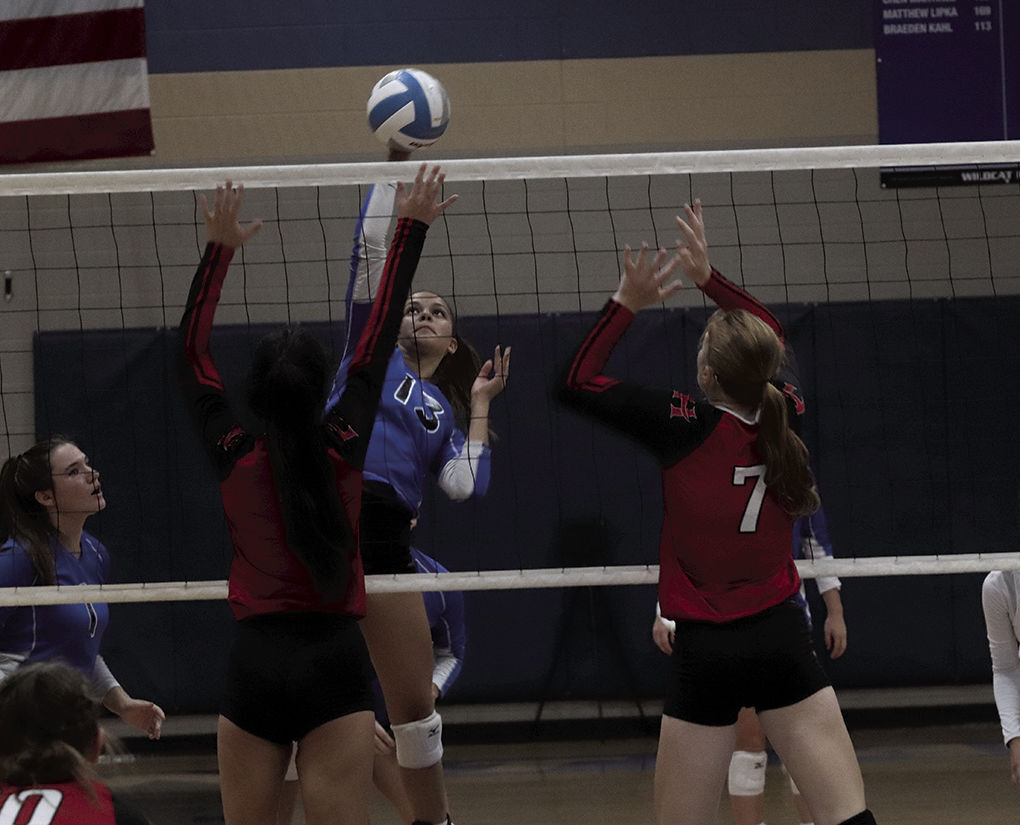 Montague's Ana Trevino (13) winds up to send the ball at the Hart defense during Tuesday's WMC match at Montague. The Wildcats won, 3-0.

Montague’s Morgan Netcott goes all out in pursuit of the ball during Tuesday’s WMC match against Hart. The Wildcats won, 3-0.

Montague’s Ana Trevino (13) sends the ball over the net at the Hart defense during Tuesday’s WMC match at Montague. Trevino had a solid offensive night in Montague’s 3-0 win.

Montague's Ana Trevino (13) winds up to send the ball at the Hart defense during Tuesday's WMC match at Montague. The Wildcats won, 3-0.

MONTAGUE — Montague continued its season-long quest to discover its offensive identity Tuesday, and it liked what it saw in a three-game win over Hart, 25-16, 25-18, 25-22.

"We're building hitters right now, plain and simple," Wildcats' coach Shawn Bectel said. "(Ana) Trevino stepped up big tonight. She was solid. My outsides are doing a nice job. They're all in different roles, in roles they're not used to. It's coming. That's the big thing. It has to be a growth (process). We were hitting right just above even and that's not going to win a lot of the games we're playing. Tonight, I'm sure, was positive, and we're working towards that."

Trevino had a terrific match and was Montague's go-to hitter all night, collecting 11 kills and hitting .304. The 'Cats haven't discovered yet who their top hitter is going to be, a la past years' stars like Reilly Murphy and Emma Flagstead, but Trevino certainly made her case for the role. Also excelling was Britta Johnson, who added eight kills on a .227 hitting percentage.

"Britta is a phenomenal athlete, can jump out of the gym," Bectel said. "Tonight she had a great night."

Opposite Johnson on the outside, Montague is also excited about freshman Mazie Collins. Collins had only a pair of kills, but Bectel views her as a key building block for Montague's future.

"They're both really good players and I'm excited about both of them," Bectel said. "But it's growth. You take a sophomore that was on JV last year and say, 'Hey, here's the keys to the car. Go for it.' Just like anybody, they're going to be a little nervous. But I think she's doing a great job."

Montague football steps up on defense to deliver 14-7 win

The match was largely in Montague's hands throughout, though Hart did make a couple of pushes. The Pirates trailed by just one, 11-10, at one point in game one before Montague pulled away, and they also surged back into game three late, rallying from down 18-12 to make the Wildcats sweat it out a bit.

That was partially a product of Bectel getting as many players in the match as possible, which takes on added importance this year given how young the team is.

"It was a little closer than I wanted, but the fact that I got to get everybody in, that's a big deal for me right now, especially in a game like tonight," Bectel said. "We played pretty well. The way we'd been playing, this is another step in the right direction for us. Hart's got some weapons. There are a couple kids that can hit there."

The win kept the Wildcats in the hunt in the WMC, and as the two-time league champs, defending the title is a stated goal for the team. Despite the team's lackluster early record of 6-16 overall, the 3-1 conference mark gives Montague a chance, if the 'Cats can win their next three in the league, to face WMC favorite Whitehall in the final conference match with everything on the line.

"The one thing we talked about is, it may not be the year we want, but we can still win everything we want to win," Bectel said. "(A better) record would be great, but it's not the most important thing. It's achieving those things like winning the conference, the GMAA, the districts, whatever. All those are still in front of us.

"This weekend we played Whitehall (at the Fruitport Invitational) and we had them on the ropes. We just didn't finish the job. If we keep getting better every time, we'll get there."