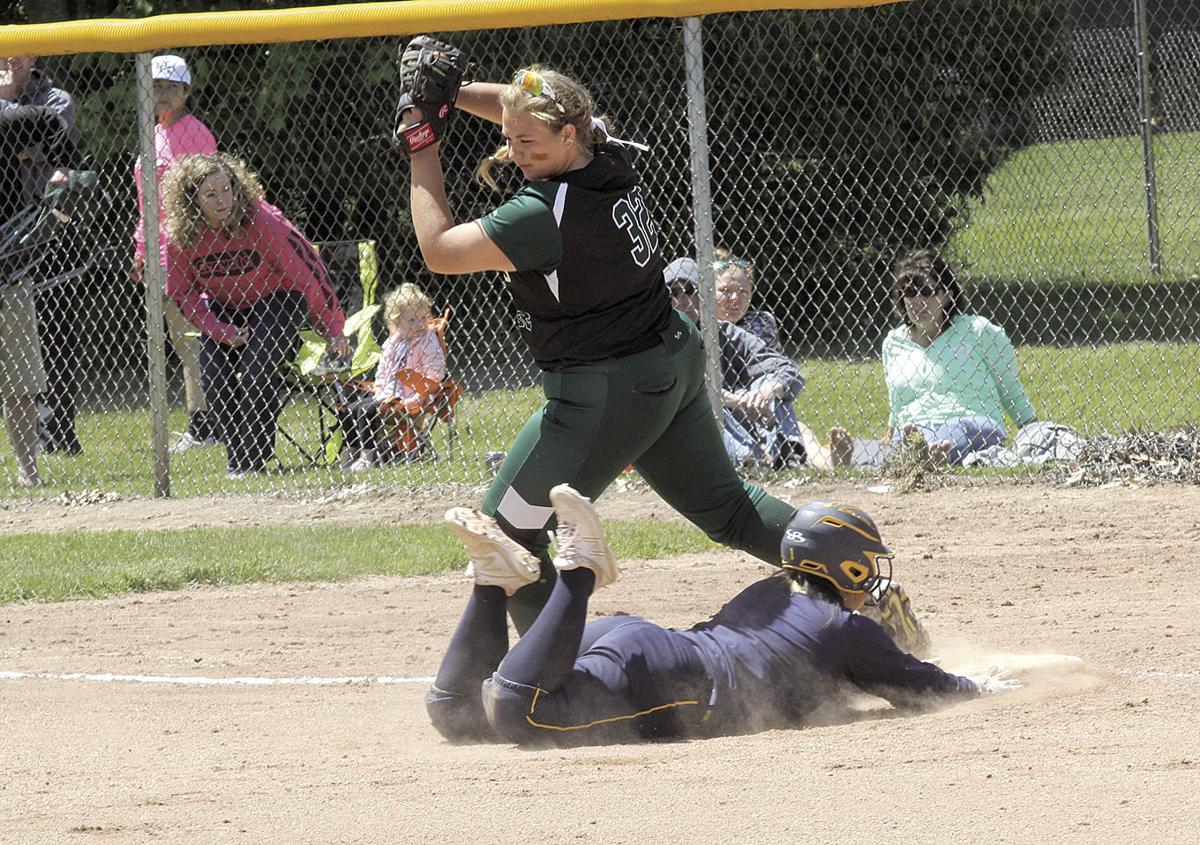 Reeths-Puffer first baseman Payleigh Primmer (32) fields a throw while keeping an eye on a Grand Haven player at first base during last season’s district title game at Grand Haven. Primmer was one of several R-P seniors to lose out on their senior seasons playing softball. 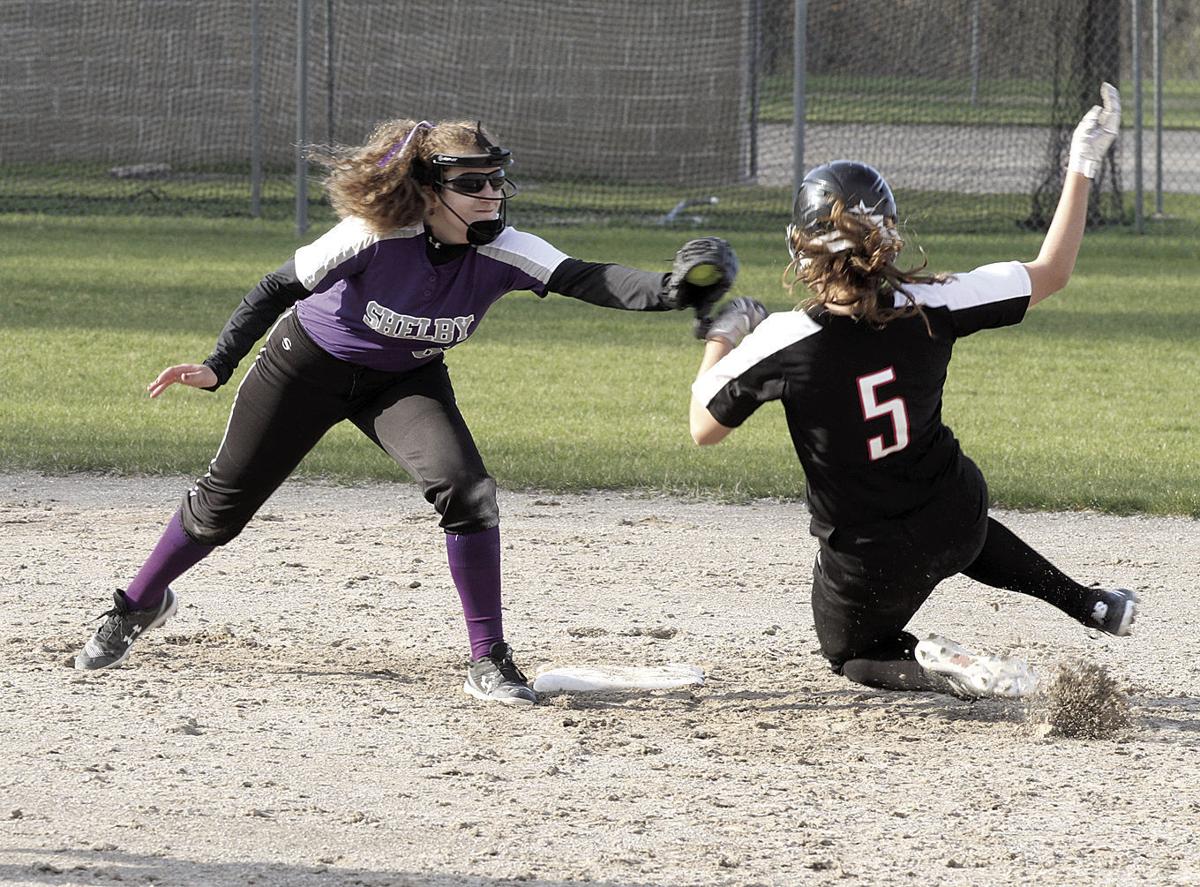 Whitehall’s Corey Huebler (5) is tagged out by Shelby’s Courtney Brown at second base during a game at Shelby last season. Huebler, a senior, lost her final season to the COVID-19 pandemic.

Reeths-Puffer first baseman Payleigh Primmer (32) fields a throw while keeping an eye on a Grand Haven player at first base during last season’s district title game at Grand Haven. Primmer was one of several R-P seniors to lose out on their senior seasons playing softball.

Whitehall’s Corey Huebler (5) is tagged out by Shelby’s Courtney Brown at second base during a game at Shelby last season. Huebler, a senior, lost her final season to the COVID-19 pandemic.

None of those ideas include a scenario where their first seasons get wiped out by a global pandemic. But that’s where Whitehall softball coach Denis Koegel and Reeths-Puffer softball coach Sarah Ferenz are this spring.

Luckily, neither new coach is coming in completely blind. Both Koegel and Ferenz possess plenty of experience within their programs. Ferenz, of course, played for the Rockets under her predecessor Trista Stingle, and has coached many of her current charges in travel ball, as well as the Rocket JVs the past two seasons. Koegel coached the Whitehall JVs last season and assistant coached the year before, so he too is familiar with his current team.

Both coaches had high hopes for 2020, and justifiably so. Ferenz, who played at Muskegon Community College and later Ferris State, was taking over a program on a high after Stingle guided the Rockets to a long-awaited district title last spring. While R-P had graduated many key players off that squad, including all-everything pitcher Makayla Thompson, six seniors were back and seemingly ready to contribute to a run at a repeat.

“It’s definitely frustrating, but even though I’m losing my first year coaching, honestly the thing I think most about is the girls,” Ferenz said. “Even though I am sad for them, we’re trying to do as much as we can for them. As involved as I was as a player, I can’t even fathom that. I can’t imagine what they’re going through. My heart hurts for all of them because they’re missing their season.”

Koegel expressed similar sentiments. In his first season after a long and successful run by Dave Goodrich at Whitehall, Koegel was looking at a team with high hopes of competing for a district title and beyond.

The Vikings, like the Rockets, were armed with a strong crew of seniors, headlined by the Martin twins, Kate and Emily. Corey Huebler, Carly Hubbard, Morgan Knapp, Karoline Glamzi, Alexis Brown and Yasmeen Guzman also were set for their final seasons. Whitehall had finished second behind only powerhouse Oakridge in the West Michigan Conference last season and seemed poised for a big 2020.

“I just feel terrible for our seniors, and we had such a senior-heavy team,” Koegel said. “This was going to be a big year for them, and it just breaks my heart.”

When the MHSAA mandated all sports shut down activity in mid-March, the spring teams, softball included, were in their first weeks of practice. Ferenz said R-P’s varsity and JV teams had been determined only one day prior, so each group only had one practice.

At first, the new coaches kept in touch with their teams to keep them on track with workouts, keeping their skills sharp as best they could, and other activities with an eye towards resuming play at one point. Once it became clear spring sports weren’t going to be played, the tenor of those communications changed from physical preparation to mental health.

“We’re trying to keep positivity and sharing good news with each other,” Ferenz said.

Since spring sports were canceled and high school athletes had to focus on their distance learning, Koegel said communication between the team and coaches grew less frequent, but it’s still been regular, as the school year has wound down.

The first-year coaches now find themselves in a somewhat awkward position of trying to prepare, at least a little, for the 2021 season during the time the 2020 season should have been played. The players who will be back next year for both teams have, the coaches say, kept busy as best they can to keep themselves ready to go.

“I want to make sure we are adhering to the MHSAA guidelines as closely as possible, and a lot of the stuff we would do involves being on the field, and we can’t be on the field,” Koegel said. “I have encouraged the girls, as a benefit of having so much experience, to do what they can with what they have. The girls don’t have pitching machines at home...It makes it really hard when you kind of need other people to be a part of it, and we can’t be connected.”

Both teams will look much different in ‘21, when each coach actually begins their first season. Koegel is optimistic that his team will remain strong even without the talented seniors set to graduate. The Vikings have a solid group of players for next year, including Kyleigh Martin, Kate and Emily’s sister, who had a standout freshman season last spring and will both pitch and play shortstop. Greta Hosticka, who played third base last year, will be back fully healthy after suffering an injury earlier this school year. Ileana Hatcher is another pitcher, and Koegel said she can play just about anywhere on the field.

“We’ll probably do a lot of practicing all together to sort things out,” Koegel said. “We have so many question marks and places to fill.”

The Rockets project to be very young next spring. Ferenz said as many as 10 eighth-graders with strong futures in the program will be freshmen next season. With so little varsity experience set to return, and going through the unusually long off-season, Ferenz said preparation among the team will be very important going forward.

“We’re hoping eventually we can get back into the weight room and on the softball field and doing those things, but at the same time, giving some things they can do at home for workouts is super beneficial going into next year, especially with such a huge gap with not doing anything,” Ferenz said. “I think that’s super important as well.

“I think we’ll have a few seniors next year, but I think we’ll have strong leadership from our girls...They’re strong at the younger levels and they’ve been involved in travel softball. Hopefully when we get back together again, we can bond and prepare ourselves for a different look and a different team.”

Both coaches said they are considering various options for some way to honor their outgoing seniors if restrictions are lifted enough to make it possible, whether it be a final team practice or a more informal gathering. They both look forward to a chance to get back on the field for a second try at their first seasons next spring.

“It would be great if we had an opportunity this summer, if the stars align...to play a little ball, and have one more time to suit up and get on the field,” Koegel said.