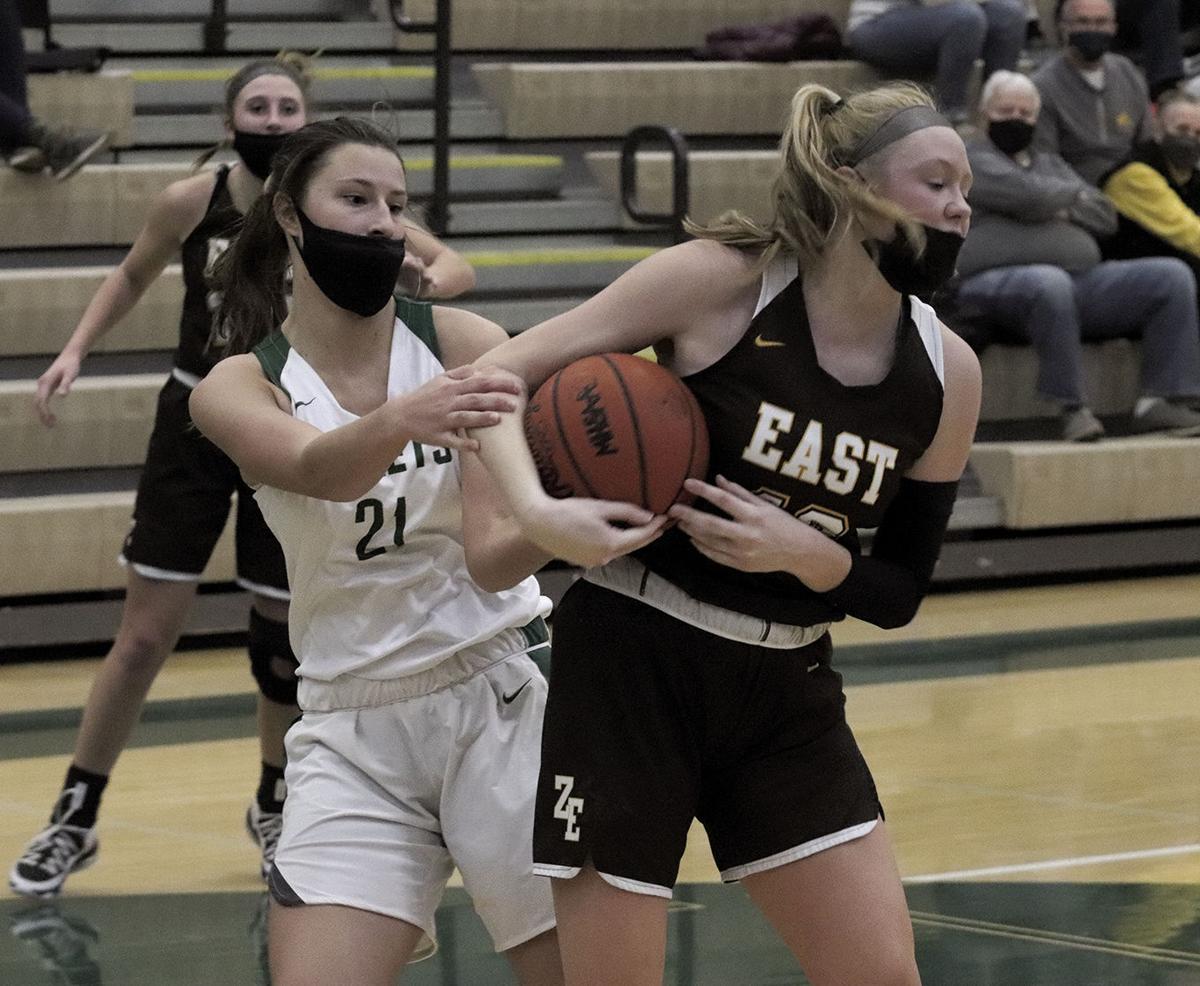 Reeths-Puffer’s Sophia Hekkema (left) tries to steal the ball from a Zeeland East foe during a game last season. Hekkema is one of the Rockets’ most experienced players, 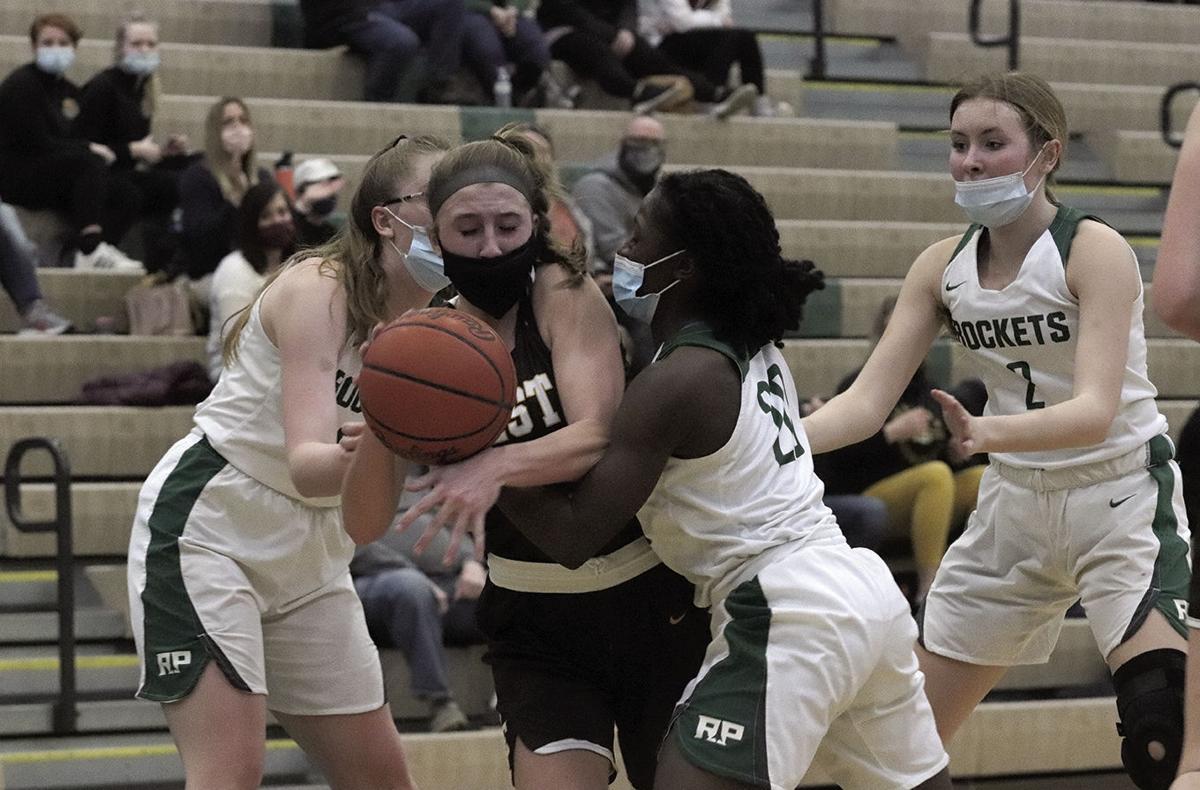 Reeths-Puffer’s Arrionna Williams (right) gets in the face of Zeeland East’s Katie Klein during a game last season. Williams is one of three Rockets' veterans who will lead the team this year.

Reeths-Puffer’s Sophia Hekkema (left) tries to steal the ball from a Zeeland East foe during a game last season. Hekkema is one of the Rockets’ most experienced players,

Reeths-Puffer’s Arrionna Williams (right) gets in the face of Zeeland East’s Katie Klein during a game last season. Williams is one of three Rockets' veterans who will lead the team this year.

This is the third year at the helm for Reeths-Puffer coach Rodney Walker, but in many ways it feels like the first. Most importantly, it's the first season Walker has had a relatively normal off-season to prepare his team for games.

Walker got the Rockets' job two weeks before the team's first game in 2019, and of course last year was a mess for everyone amid the COVID-19 pandemic. It was an even bigger mess for the Rockets than most, as R-P had its season start delayed due to positive virus tests within the program.

Despite all of that, R-P was competitive a season ago, with a record around the .500 mark. This year, the Rockets are shooting higher.

"I always have high expectations, and we know that we have an empty spot on the regional championship banner in our gym," Walker said. "That's one of our goals that we have, (as well as) to win a state championship. That's the main goal for every team I've ever coached. I'm pushing the mindset to want to do that. Whether it's realistic or unrealistic, that's our mindset."

"We have those three kids from our core group that are returning from last season," Walker said. "I look for those three to carry us this year and bring us along to make sure we're doing what we need to this season."

R-P remains a young team, though, as coach Walker said there are two seniors and two juniors on the team, with sophomores filling out most of the rest of the spots. The Rockets, in fact, don't have a JV schedule this season due to their youth, though they do have a freshman team.

Hekkema, who's played a lot of basketball going back to her AAU days in middle school, was a first team all-conference pick last season and should only be better this season as a junior. As with the other veterans, leadership will be a big factor for her too.

That veteran trio won't be all by themselves, though. Sophomore point guard Brooklyn Tornes is looking to increase her role. Walker said Tornes has the skills to run the R-P offense.

"She's definitely going to provide a spark from the point guard position," Walker said. "She sees the floor really well, can get to the basket and gets everyone involved. She is a great rebounder and plays with defensive intensity."

New faces from the JV include junior Ashlynn Anderson and sophomore Irelyn Nicklasch, who should give the Rockets some rebounding and high energy.

Walker views the O-K Green Conference as being very balanced this year, with no team able to just walk out on the court and win.

"It's extremely competitive and we'll have to bring our A game every night in the conference," Walker said.

A non-league highlight will be R-P's neutral-site game against Belleville at Aquinas College Dec. 18. The contest is one of several at Aquinas that weekend and will give R-P's players exposure to college coaches and a bigger stage to showcase their skills. The Rockets will also travel to Kalamazoo Central later in the season to face a Maroon Giants squad that played in the regional finals last year.

It'll be difficult, but Walker thinks his team is ready for those kinds of challenges.

"I just think all our girls have been working really hard," Walker said. "We've been pretty consistent all summer in staying in the gym and creating a different kind of culture. We're trying to establish what our girls basketball program looks like in the future, and I think we'll do a good job showing hard work pays off."