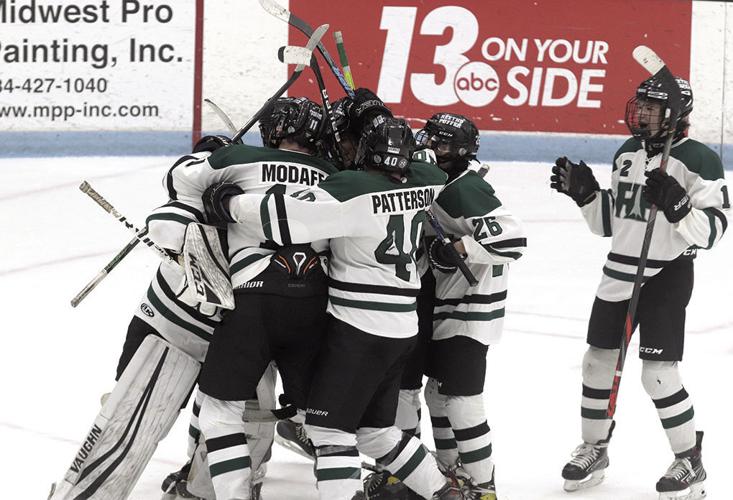 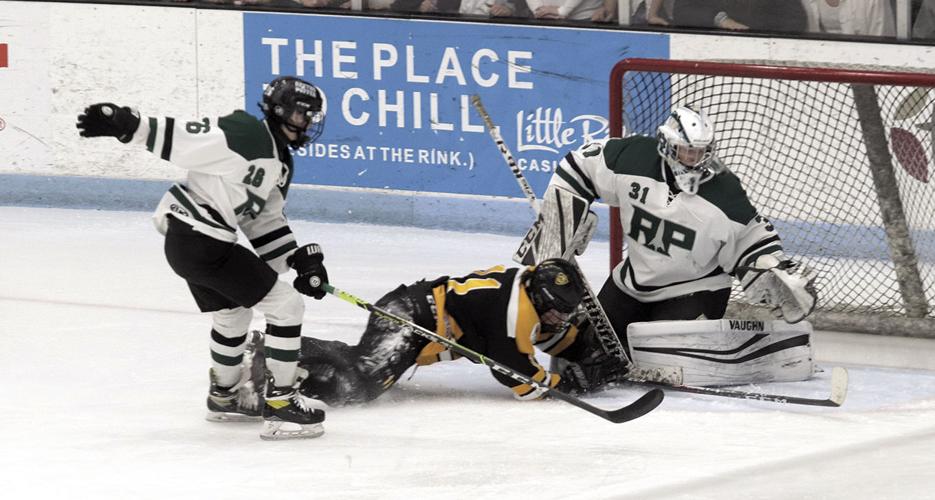 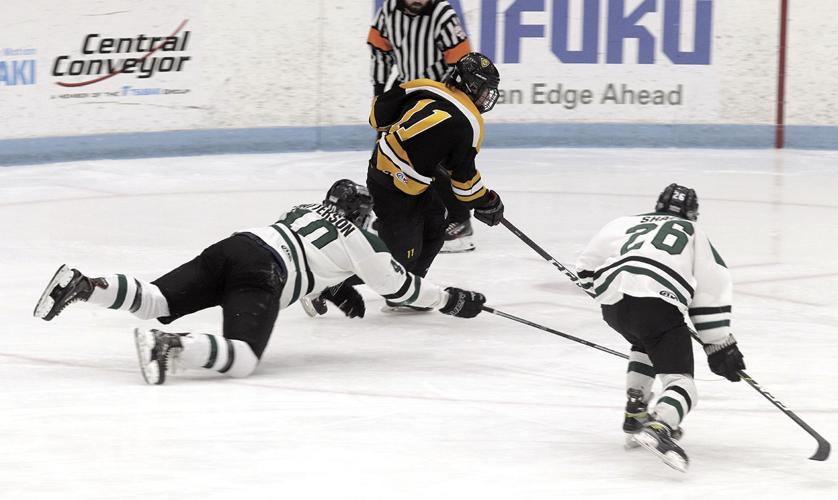 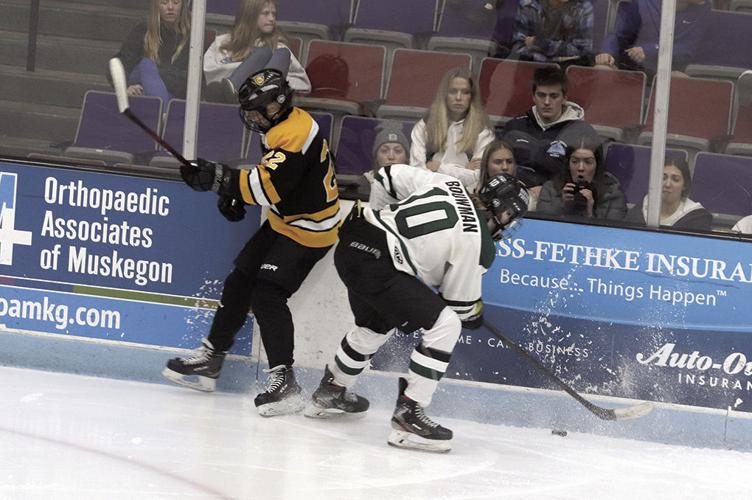 Reeths-Puffer's Andrew Bouwman tries to keep control of the puck after colliding with Kenowa Hills' Ryan Freres during Friday's game at Mercy Health Arena. Bouwman had three goals in a 5-2 Rockets win. 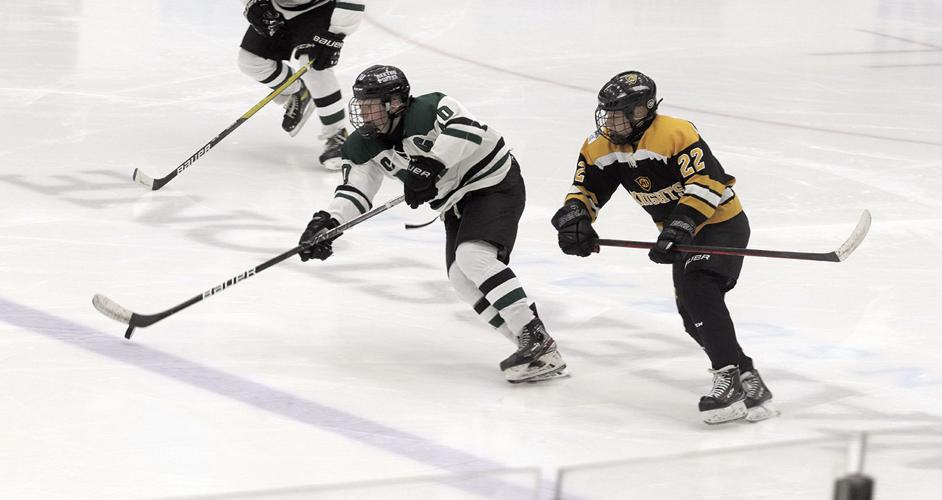 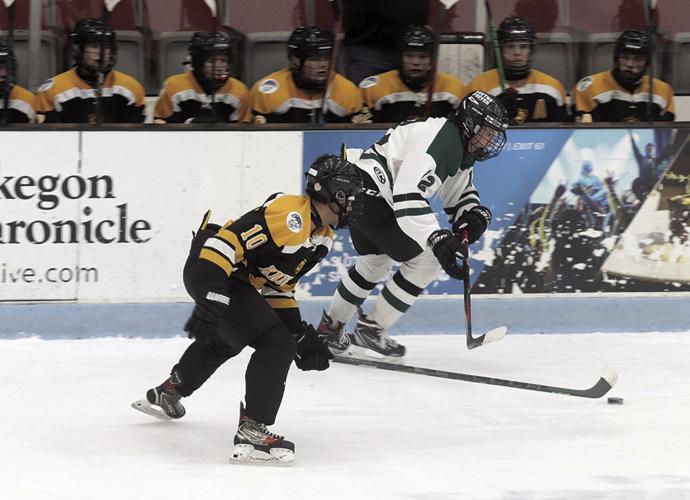 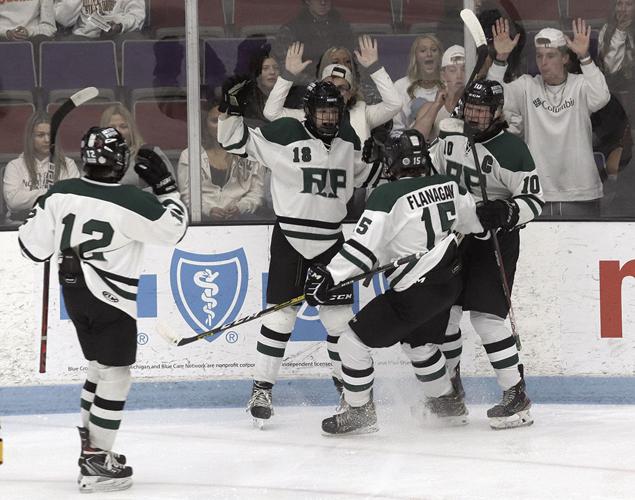 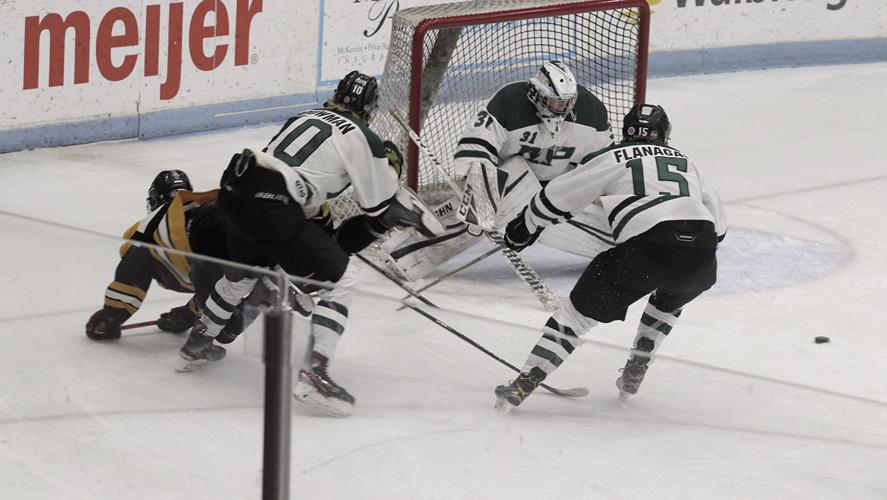 Reeths-Puffer's Andrew Bouwman (10) knocks over a Kenowa Hills player to prevent a scoring chance during Friday's game at Mercy Health Arena. Daniel Flanagan chases down the puck. The Rockets won, 5-2.

Reeths-Puffer's Andrew Bouwman tries to keep control of the puck after colliding with Kenowa Hills' Ryan Freres during Friday's game at Mercy Health Arena. Bouwman had three goals in a 5-2 Rockets win.

Reeths-Puffer's Andrew Bouwman (10) knocks over a Kenowa Hills player to prevent a scoring chance during Friday's game at Mercy Health Arena. Daniel Flanagan chases down the puck. The Rockets won, 5-2.

MUSKEGON — When Ryan Martin got the Reeths-Puffer coaching job this offseason, he had his new players write the staff one-page letters — as a way of getting acquainted and also to find out what would motivate them. In so many words, many of the Rockets told Martin that they wanted redemption after winning just two games last year and having their regular season ended by positive COVID-19 tests.

“There were several of them, especially the returning players and seniors, that said, this being their last year, with a half-season last year, if you want to call it that, they weren’t going to let this one go to waste,” Martin said. “The boys are really into that.”

The Knights led 2-1 after a period, but R-P tied it in the second on a goal by Landon Patterson on a wicked shot from the blue line. Then, to start the third, senior captain Andrew Bouwman made a fierce rush at the net and scored the go-ahead goal. He added another with 8:36 left, giving him three on the night — not a bad way to celebrate his birthday. Jake Pierce capped off the scoring with his first career varsity goal in the final minutes.

Both coach and player sensed a turn in the team’s mood after Bouwman put his team ahead to start the final period.

“I noticed (in) all the guys, you could tell they were more upbeat, faster pace, and it was just a good feeling,” Bouwman said.

Despite being outshot by a hefty 57-22 margin — in part due to being on the penalty kill for much of the first two periods — R-P withstood the Knights’ attack with an effective defensive strategy of funneling Kenowa Hills to the outside to make the shots easier for Rockets’ netminder Isaiah Van Noord to stop. Van Noord obliged by turning back almost all of them.

“They’re a really good skating team with a lot of speed, so if you can contain them outside and just make them throw it at the net, we felt pretty confident,” Martin said.

“I thought it was great,” Bouwman added. “(Van Noord) played a great game. If it wasn’t for him we would’ve lost, for sure.”

The Rockets won’t have to wait long to see if they can ride the momentum of the win to more success, as they pay a visit to rival Mona Shores at the Lakeshore Sports Center Saturday night. Martin knowingly said he was sure the Sailors, who had Friday off, had taken the chance to get a firsthand look at the crosstown foe.

“I’d imagine they’ll be pretty pumped coming off this, and I’m sure there’s a ton of the Shores staff and players up in the stands right now,” Martin said. “They know we’re going to skate for three periods, so we’ve got to bring it again tomorrow.”