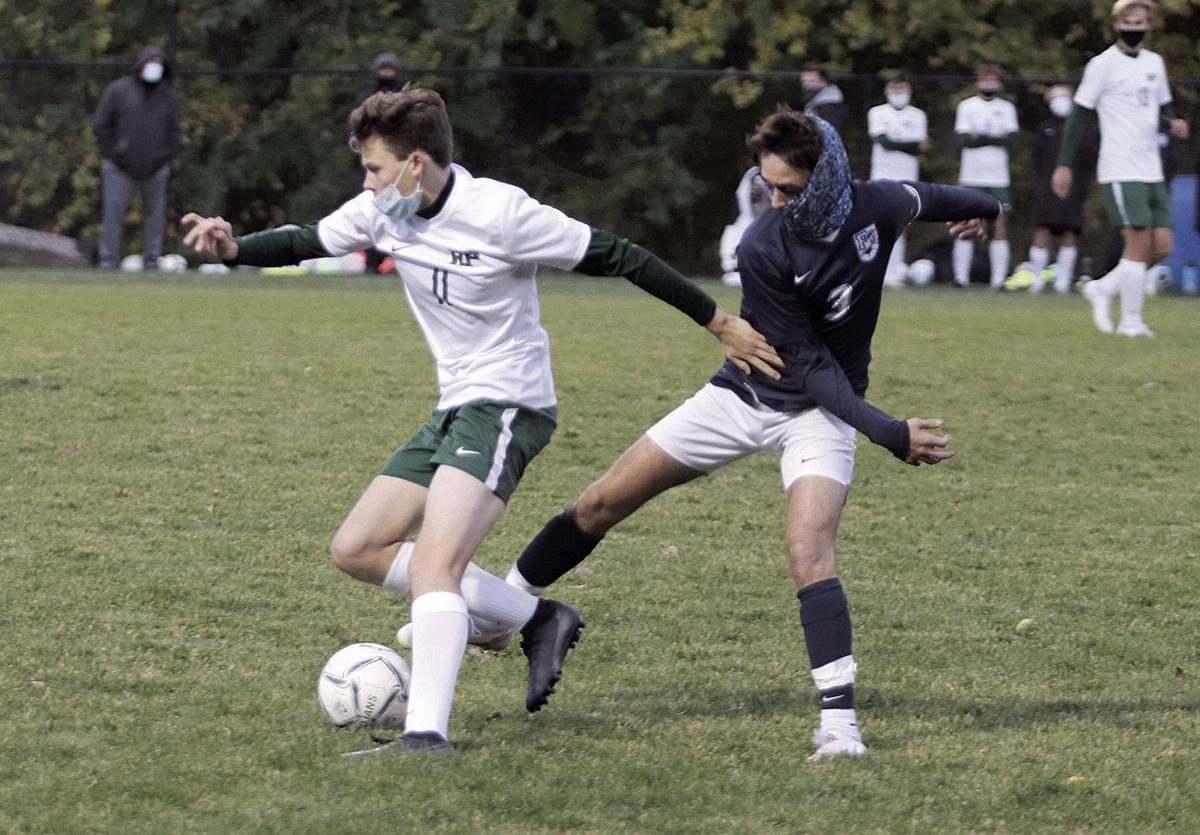 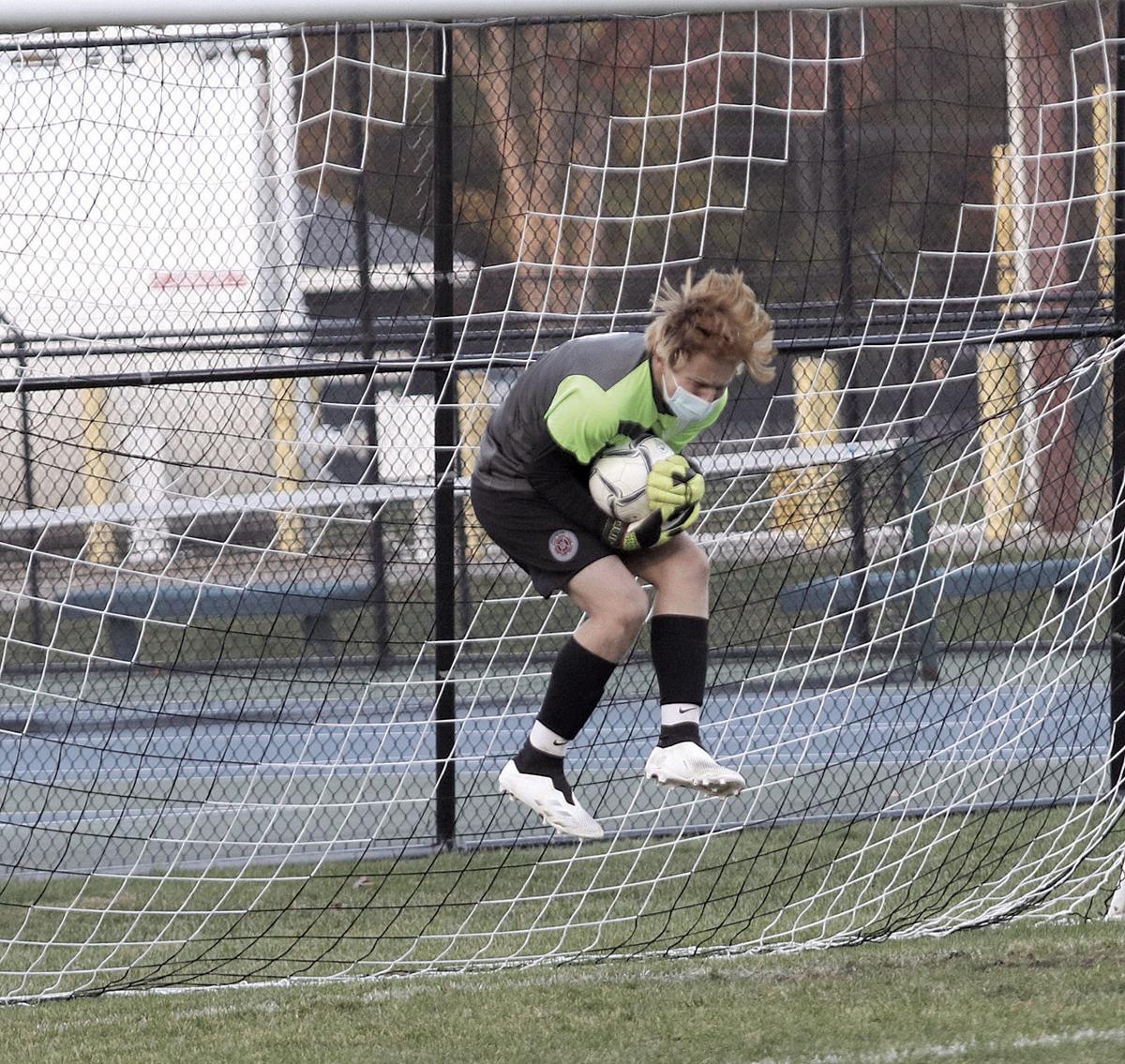 Reeths-Puffer keeper Gage Hopkins makes a save during Thursday's pre-district soccer game against Fruitport. Hopkins only allowed one goal in a 3-1 Rockets' win. 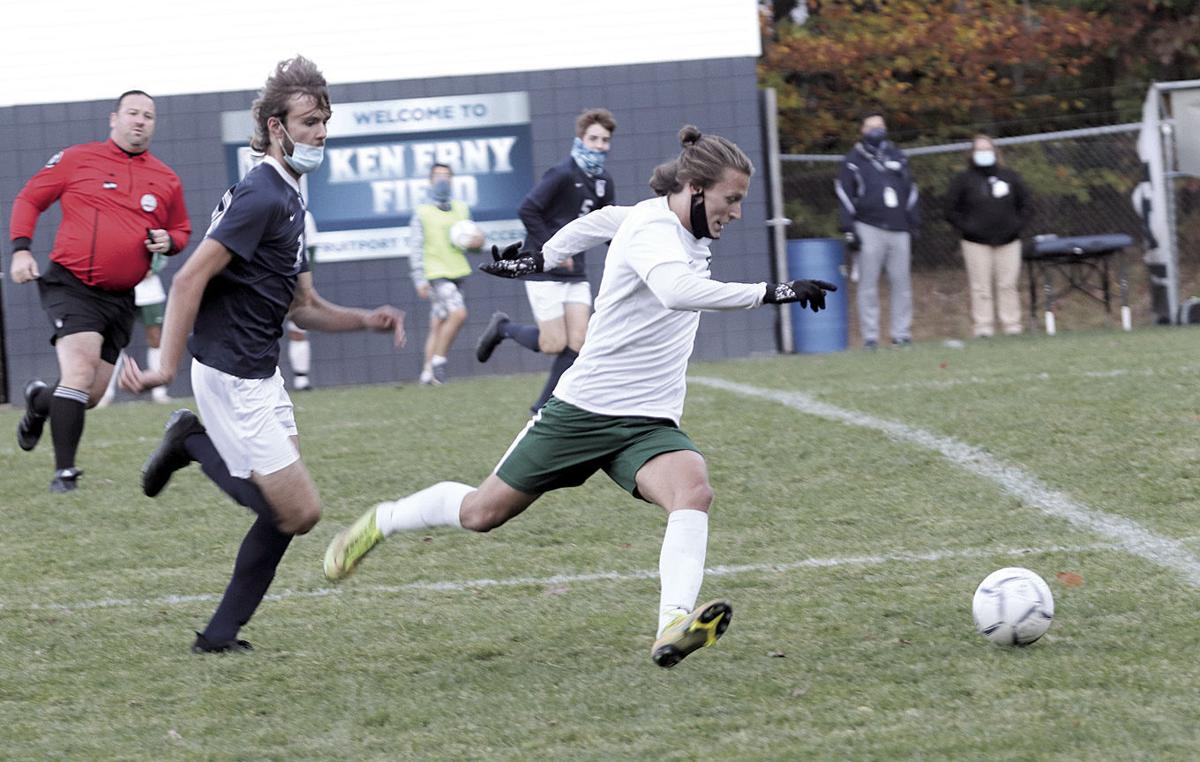 Reeths-Puffer’s Jaxon Carpenter (right) heads upfield with the ball during Thursday’s pre-district game at Fruitport. Carpenter had two goals in a 3-1 R-P win. 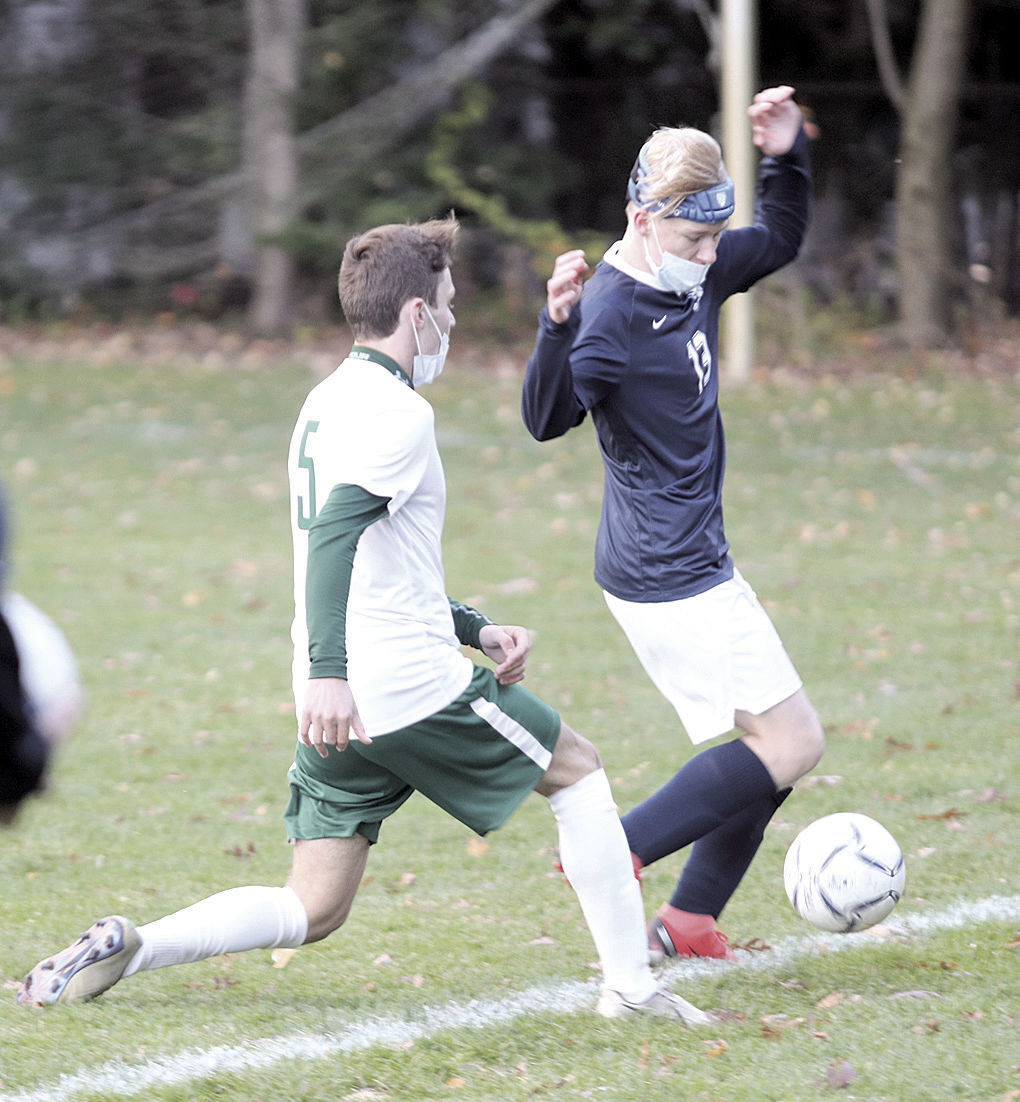 Reeths-Puffer's Preston Carpenter (5) and Fruitport's Jackson Smith-Upson head out of bounds in pursuit of the ball during Thursday's pre-district game at Fruitport. The Rockets won, 3-1, and will face Whitehall in the semifinals next week.

Reeths-Puffer keeper Gage Hopkins makes a save during Thursday's pre-district soccer game against Fruitport. Hopkins only allowed one goal in a 3-1 Rockets' win.

Reeths-Puffer’s Jaxon Carpenter (right) heads upfield with the ball during Thursday’s pre-district game at Fruitport. Carpenter had two goals in a 3-1 R-P win.

Reeths-Puffer's Preston Carpenter (5) and Fruitport's Jackson Smith-Upson head out of bounds in pursuit of the ball during Thursday's pre-district game at Fruitport. The Rockets won, 3-1, and will face Whitehall in the semifinals next week.

FRUITPORT — Reeths-Puffer and Fruitport's pre-district game Thursday had the look, on paper, of a game that would be closely contested the whole way.

The Rockets quickly turned that idea on its head, scoring two early goals to take command of the game and thoroughly dominating the first 70 minutes of play en route to a 3-1 win. R-P's victory sets up an area showdown in the semifinals, as the Rockets will face Whitehall Tuesday night in a rematch of a close R-P win in last year's semis.

Senior leader Jaxon Carpenter, naturally, spearheaded the Rockets (5-7-4) early in the game, scoring each of the first two goals. His first came only 1:18 into the game on a perfect shot to the corner of the net, and his second came with 15:24 to play in the first half on a play that was a mirror image of the first.

Carpenter said that the team's starts have been a huge factor in their games, for good and for ill.

"I think the biggest thing for us this season is the way we start games," Carpenter said. "Tonight we came out and the boys were just buzzing. Everyone was just flying around working hard, and that's what we need. In the games we've lost, it's when we come out flat. And we're not really good at climbing the mountain in the second half or late in the first half. It's important for us to start out strong."

Fittingly, it was freshman Liam Smith who scored the final Rockets' goal of the game, with 10 minutes to go in the half. Smith's goal was whistled late, as officials did not immediately think the ball crossed the goal line, but seconds later, the call was made and Smith was on the board.

Harrell identified Smith as a potential successor to Carpenter before the season even began, and Smith has done nothing this year to temper those expectations.

"It's perfect timing, having Jaxon as a senior and Liam as a freshman," Harrell said. "It's amazing. They're buddies. They're always around each other at practice. They're always talking. Liam plays very, very high (level) travel ball through (Michigan Fire), so he's got a very high IQ of the game. Jaxon being the kind of kid he is, he likes the challenge of taking Liam under his wing a little bit, and kind of talks to him about things."

"It's awesome, because he's me (my) freshman year," Carpenter added. "I came into a team full of upperclassmen and trying to find my place, and he's proven himself. He's proven he deserves to be here with goals like that, as you see."

The only downer in a terrific performance by the Rockets is that they seemed to let off the gas pedal a bit late in the game. Fruitport turned up the attack in the final 10 minutes, scoring its lone goal in that span and threatening to get more. The Trojans' score came from Sean Gieske after Rockets' keeper Gage Hopkins tried in vain to exit the box and play the ball.

Harrell chalked up the late struggles to a young team that got a bit over-excited about the caliber of game it was playing, and said the Rockets will need a full 80 minutes of good play to top the Vikings.

"We do have a lot of seniors, but tonight there were a lot of younger guys that played, and I think the boys just got a little excited," Harrell said. "We just have to clean up some things on our defensive responsibilities, and discipline and stuff on the defensive end.

"(The Vikings) have an amazing coach and a lot of hard-working kids. We know it's only going to get tougher from here. We know we have to come out and stay disciplined for the whole 80 minutes, because they'll be able to capitalize on some things for sure."

"I think the biggest thing with Whitehall that we know is that they're super athletic," Carpenter said. "They're going to come out flying as well, and talking. Chemistry is really good for them. So we have to match that."

This article has been updated to correct a mistaken reference to Liam Smith's club team, which is Michigan Fire, not Midwest United as previously stated.