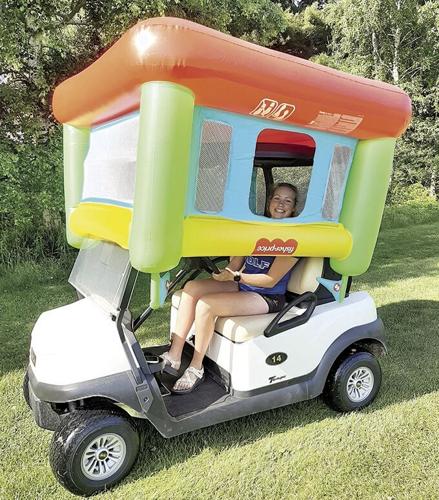 Montague golfer Natalie Kellogg tries a new way to use the inflatable castle the Wildcats had on hand during this week’s youth golf camp. 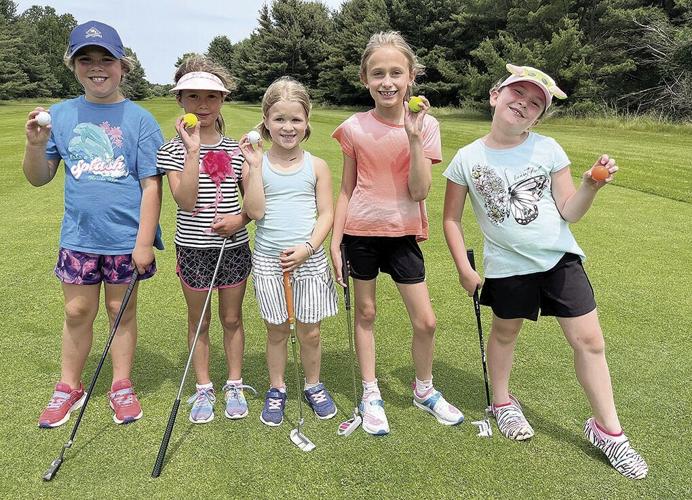 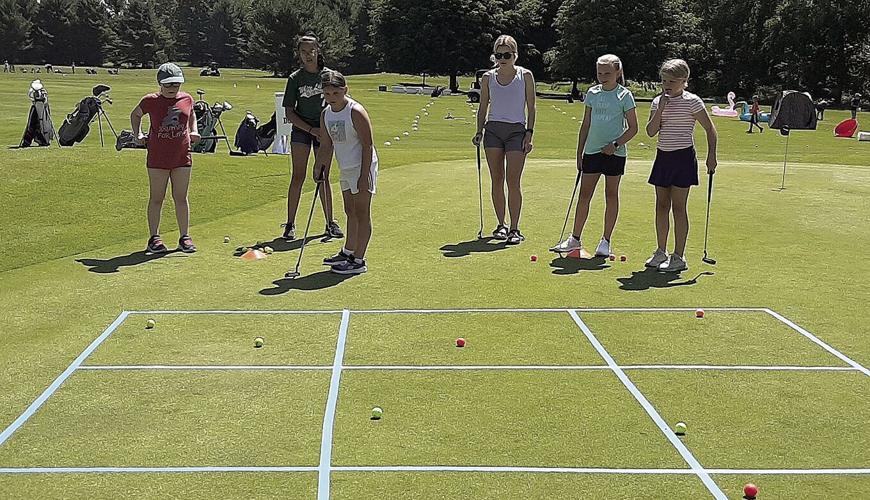 Young golfers practice their putting on a grid placed on the putting green during this week's Montague youth camp at Old Channel Trail Golf Course. 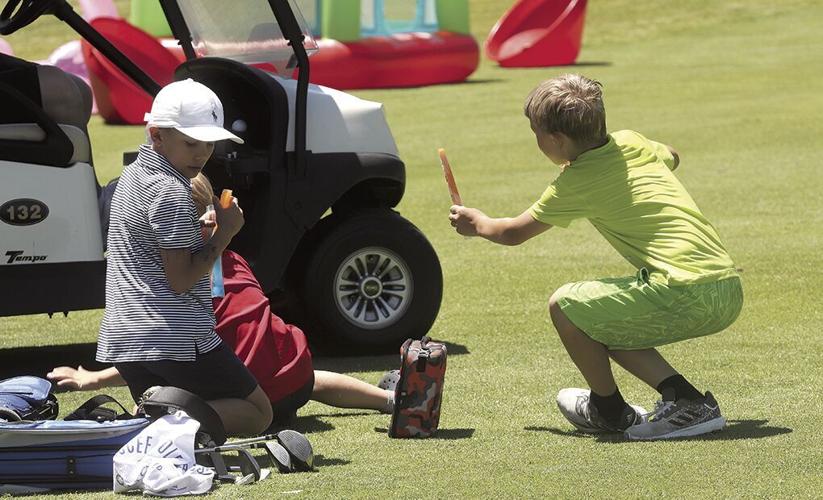 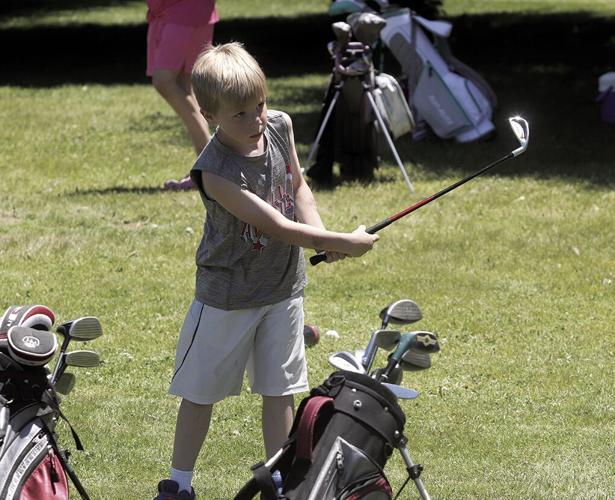 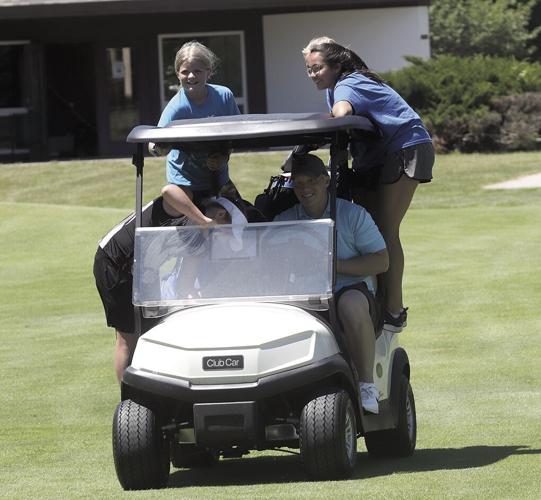 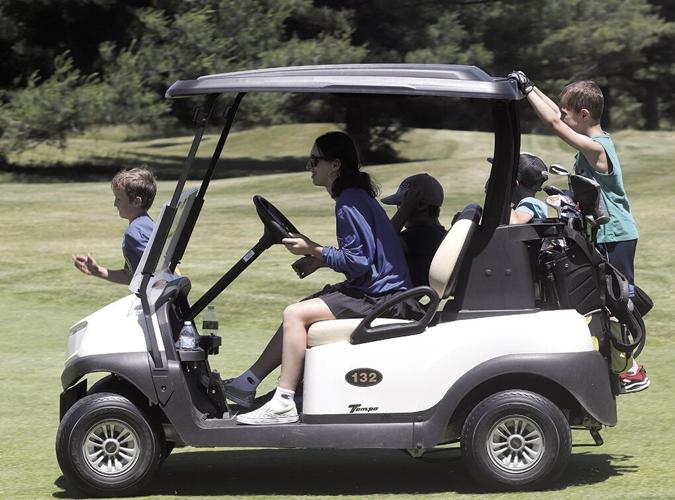 Montague golfer Natalie Kellogg tries a new way to use the inflatable castle the Wildcats had on hand during this week’s youth golf camp.

Young golfers practice their putting on a grid placed on the putting green during this week's Montague youth camp at Old Channel Trail Golf Course.

MONTAGUE — After two consecutive state championships, the Montague girls golf team has earned itself more than a bit of credit with the youth of the area, so it’s no surprise that excitement was palpable this week at the Montague youth golf camp.

Open to Montague boys and girls alike, with Wildcat players from both varsity teams coaching along with Phil Kerr and Brad Tate — state finalist Danny Flanagan and team state champs Gabby Moreau and Natalie Kellogg were just a few of the Wildcat players on hand during the week — the camp buzzed with the enjoyment of the younger players.

“Since we’re winning now, all the kids want to be coached by the players,” Kellogg said after Wednesday’s session. “That’s their favorite part.

“I think starting them now is really important, because it’s going to make them continue to play golf in the future. That’s what’s really going to grow our program.”

A few dozen kids registered for the camp, which was a lot to keep up with for the coaches and players assigned to corral them, but between the inflatable castles available, putting grids laid out on the practice greens and the chance to wind up on the driving range and hit some bombs, there was plenty for the kids to do as well.

“Everyone wants to learn, so it’s really fun,” Kellogg said. “We’ve been a little short on coaching, but everyone’s been working really hard. All the kids want to learn. It’s really fun to be able to teach them golf.”

The camp is only in its second year, and the goal is to grow both programs by sparking interest in the game at younger ages. Moreau, who’s now a Division II player after signing with Northern Michigan, told Kerr last year how envious she was that younger players are getting a chance that the current Wildcats never have; if a few take advantage of that chance, it could yield even bigger things for the golf teams down the line.

“A lot of the girls on our team never had the opportunity to golf young,” Wildcats’ assistant coach and Class of 2021 alum Megan Brown said. “Getting the girls out, they’re excited about it. The little boys and girls are so excited and get out and play golf, which none of us ever had the experience of doing. Just to pique their interest at a young age, we’re hoping it will continue into the middle school practices we’re running this summer and into high school.”

Brown assisted Kerr last year after playing on the 2020 title team, and she’ll enter this fall ready for a new experience. Last year several of the players were still her former teammates. This fall, that won’t be the case.

“There’s a huge growth from June to the end of the season, and just to see that growth from the coaches’ view is awesome too,” Brown said. “We’re excited about that part.”

“Everybody on the team’s been working really hard,” Kellogg added. “I golf pretty much every day. I’m just looking forward to starting the season with a good start. We’re missing three of our players from last year, but we’re going to fill (those spots) and we’re working as hard as we can.”