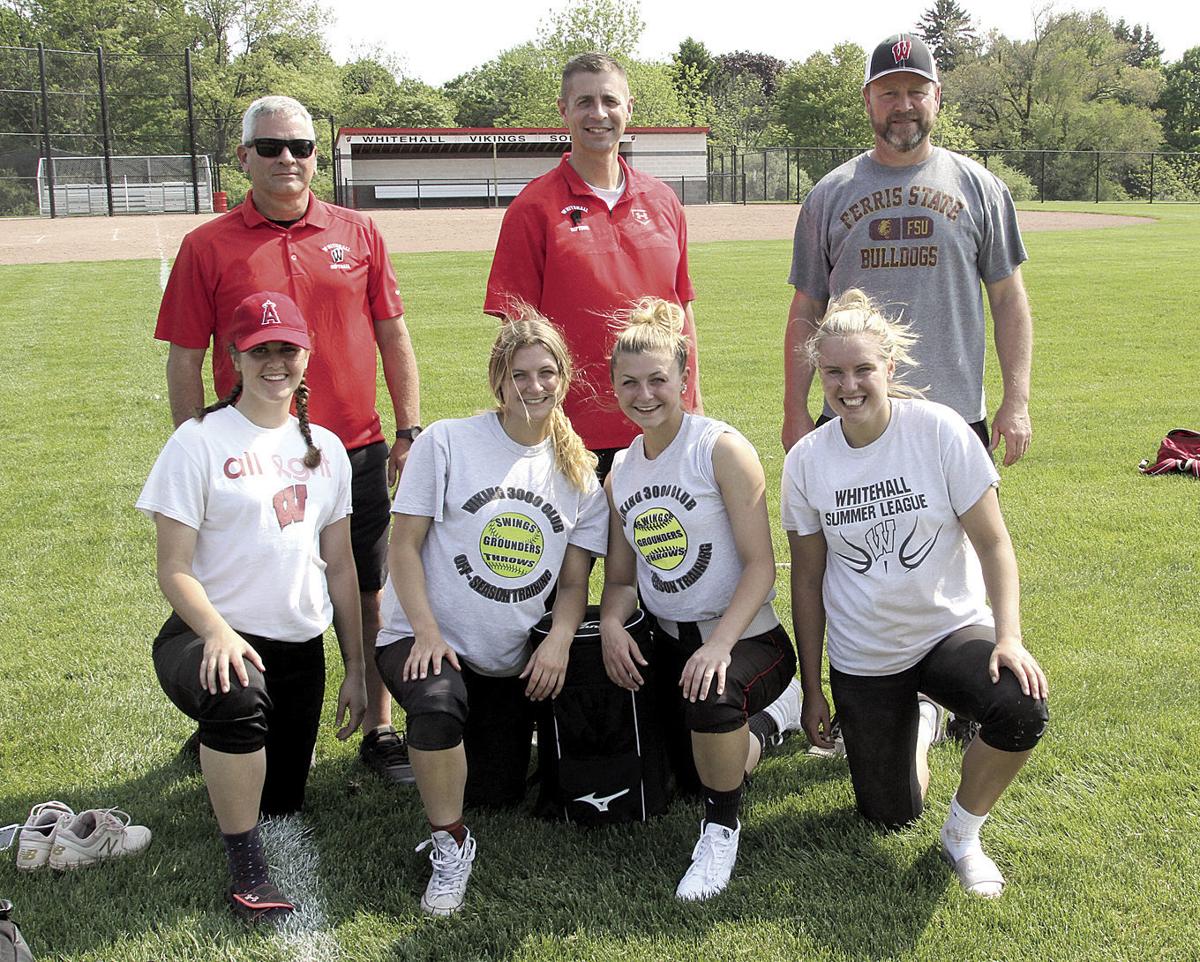 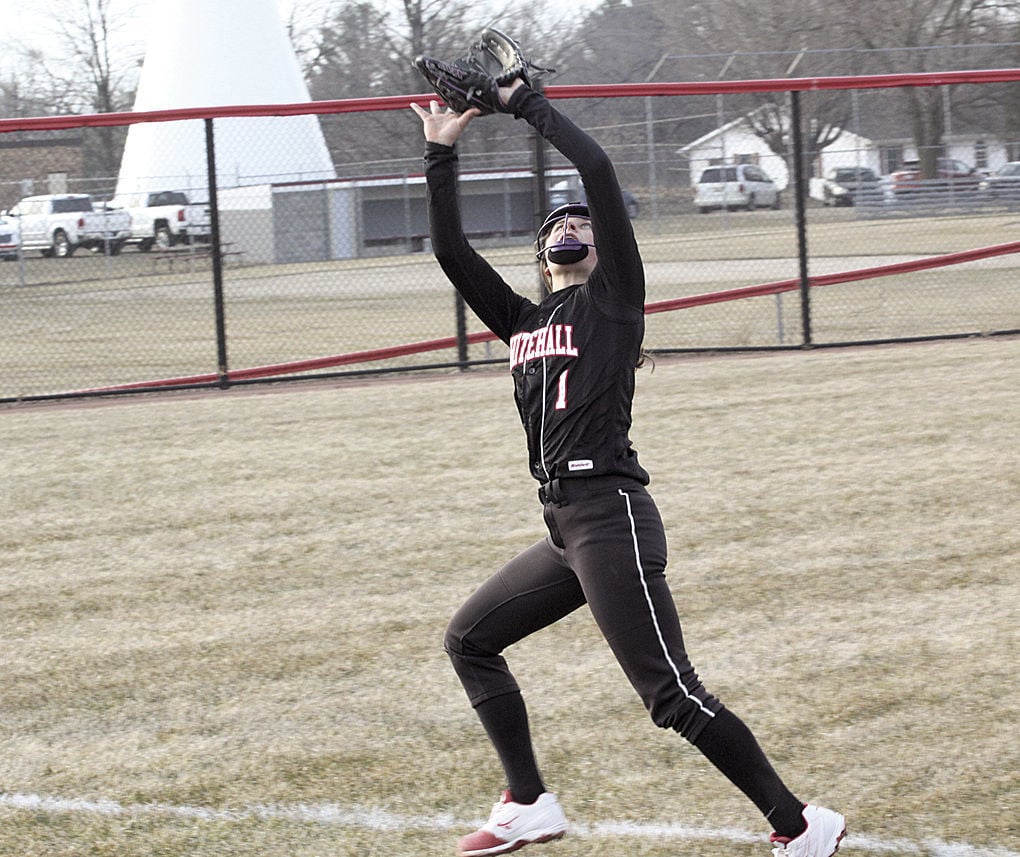 Whitehall’s Kyleigh Martin runs into the outfield to reel in a pop fly during an early-season game against Orchard View. Kyleigh’s ascension to the varsity gave her dad Kyle three daughters to coach this spring, with older twin sisters Kate and Emily already on the team.

Whitehall’s Kyleigh Martin runs into the outfield to reel in a pop fly during an early-season game against Orchard View. Kyleigh’s ascension to the varsity gave her dad Kyle three daughters to coach this spring, with older twin sisters Kate and Emily already on the team.

WHITEHALL — Many coaches talk about wanting to create a family atmosphere for their teams, but this past season, the Whitehall softball program took it to another level, with three fathers of players on the team serving as assistant coaches.

Steve Seeger, Abby’s father, had already been on staff, having coached Abby, Bailee Spicklemire and others on the team for many years. The Vikings added Kyle Martin, father of Emily, Kate and Kyleigh, as well as Scott Huebler, father of Corey, to the staff for 2019.

It was an unorthodox arrangement, but one that worked for Whitehall. Head coach Dave Goodrich knows a little about having a daughter on the team, as Katelyn played as well before graduating in 2018.

It was that experience, Dave said, that made him comfortable with the idea of having more parents on his coaching staff — and also made it easy to find humor in some of the bumps along the way.

“I know you don’t get these days back,” Goodrich said. “Emotionally, it’s a special moment. Being able to maybe get out of the blocks early at this level and go through it with my daughter, I anticipate and can chuckle and laugh at the bickering and how they work amongst each other. I know at the end of the day, we’re walking off together and we’re walking off with the same thing in mind, and that’s the best interest of the girls.”

“He’s kind of embraced that, having dads around with their daughters in a family environment,” Steve Seeger added. “I think that 10 years ago, that wouldn’t have happened. I’ve heard him say that. ‘This is a big no-no, but it’s working great.’”

Although each of the three dad assistants had coached their children prior to high school, it did take time, Dave said, for all parties involved to settle into a routine with the new arrangement this spring. However, once that happened, everyone was seemingly happy with how it turned out — particularly the Martin twins, whose dad Kyle had been coaching Kyleigh at lower levels before she joined the varsity this season as a freshman, giving the team three Martins on the roster.

“I love having my dad as coach,” Kate said, with Emily concurring. “He coached Kyleigh for the last 87 years, and we finally get him as a coach. It’s our turn.”

Each assistant specialized in the area of the field their children played, with Steve in the outfield, Kyle in the infield and Scott leading the catchers, but the nature of father-daughter relationships, and the fact that each of the three dads had built relationships with the other players as well, made it easy to swap roles if a fresh voice was needed.

“We had a practice once,” Scott Huebler said. “I took the catchers over to work on some basics, and Steve had the outfielders with Abby, and afterwards, I said, that wasn’t going too good. Corey was hearing me, but it’s a different message from your dad versus the other coaches. So I told Steve (that), and he said, ‘We’re stupid. I was getting on Abby and she was getting mad, and you were getting on Corey and she was getting mad. We should just switch.’”

It’s an approach their daughters favored, too.

“Sometimes it’s harder to hear it from Dad, because when they get on you, it’s more like ‘you’re really screwing up’,” Corey Huebler said. “But when other coaches get on you, it’s more of, they’re reminding you it’s ok to screw up, but you just have to make sure you’re doing what you’re supposed to be doing.”

Of course, it isn’t all just being hard on the girls — Emily said it helps to have that support system as well if anyone is having a rough game. Steve jokingly said that he, Scott and Kyle see themselves as the collective “good cop” to Goodrich’s “bad cop” at times.

Not that there were many rough times — despite losing four-year starters Katelyn and Madison Bond from their 2018 infield, the Vikings had a solid season, coming in second behind only state power Oakridge in the West Michigan Conference.

“The girls had a strong senior presence on the infield last year, so Coach Goodrich talked coming into this season about the importance of making this their team, and I think they’ve really done that,” Kyle Martin said.

The hyper-family atmosphere created by the Viking coaches has even spilled into the other sports the girls play, as Corey Huebler was happy to illustrate to Scott during basketball season.

“We don’t coach (basketball),” Scott said. “We’re perfectly fine being in the stands. A couple of times, I’ve gotten there late for Corey’s game...I was like, ‘Man, I’m sorry I was late.’ And she goes, ‘It’s ok. Our other dad was here.’ And there’s Kyle. (Dad) number two is up in the stands watching.”

Even Spicklemire, whose dad doesn’t coach but who stood in for Abby Seeger the day of this particular visit because Seeger had to go to work, has enjoyed the bonds that the various families have created on the team.

“It’s been nice,” Spicklemire, whose sister Rhabecca also played for Whitehall, said. “Having all three dads changes your whole perspective. Not being one of their daughters, but (still) having that dad (connection), where you know they’ll be there when you need them. When you need to talk about something, they’re there.”

In fact, the bonds with the rest of the team have grown to such an extent that it makes it easy for each dad to consider continuing to coach after their own daughters graduate.

“I’ve thought a lot about that lately,” Steve said. “My first group of Bailee, Abby and the rest, I started in the middle school with the Whitehall program when they were in seventh grade. I always said, as long as Dave will keep me around, I want to at least see them through. But now it’s like every year, (there’s a new group to bond with). This is my third year with the (Martin) twins, and it’s like, how do you stop?”

Certainly the players would love to see each dad continue to coach — Seeger and Spicklemire graduated after the season, but the Martins and Huebler will be back for 2020. The close relationships each group have are evident.

In fact, there’s really only one problem with having Dad right there on the field with you evach day, Emily Martin said.

“We can’t over-exaggerate our cool plays anymore because he’s right there to see them,” Emily said with a laugh.