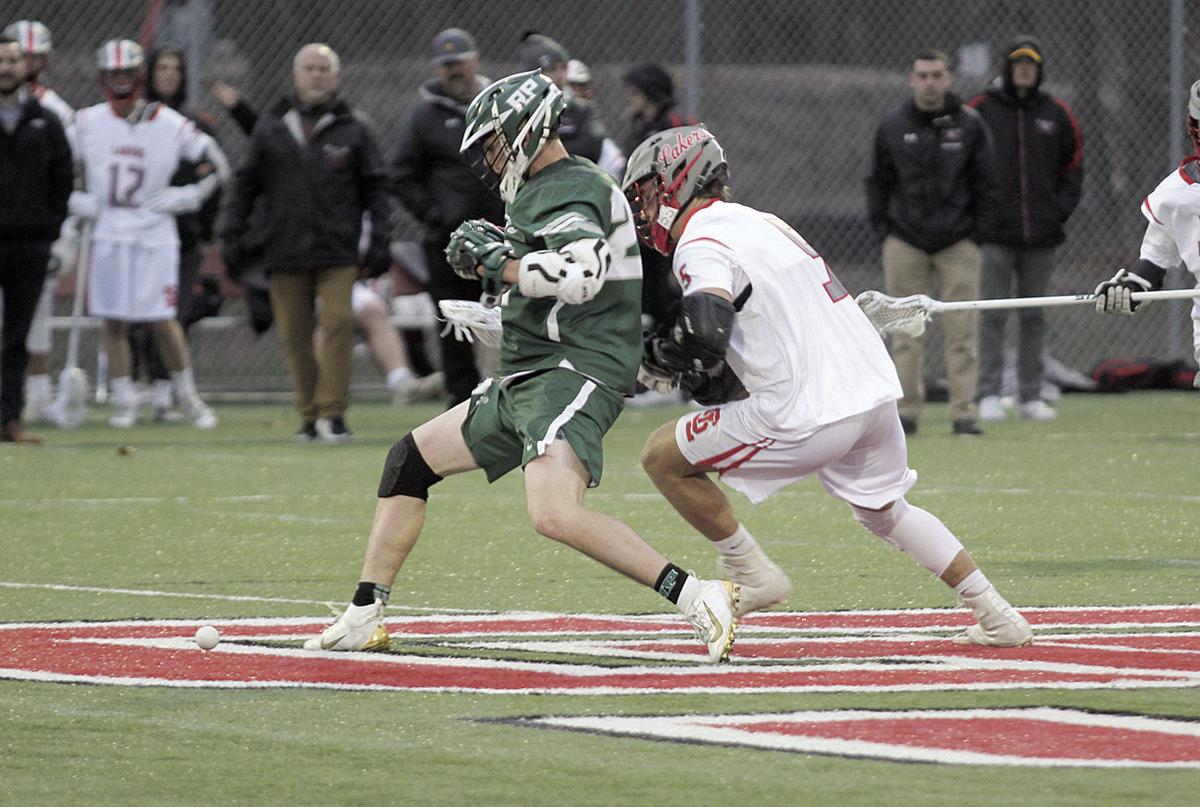 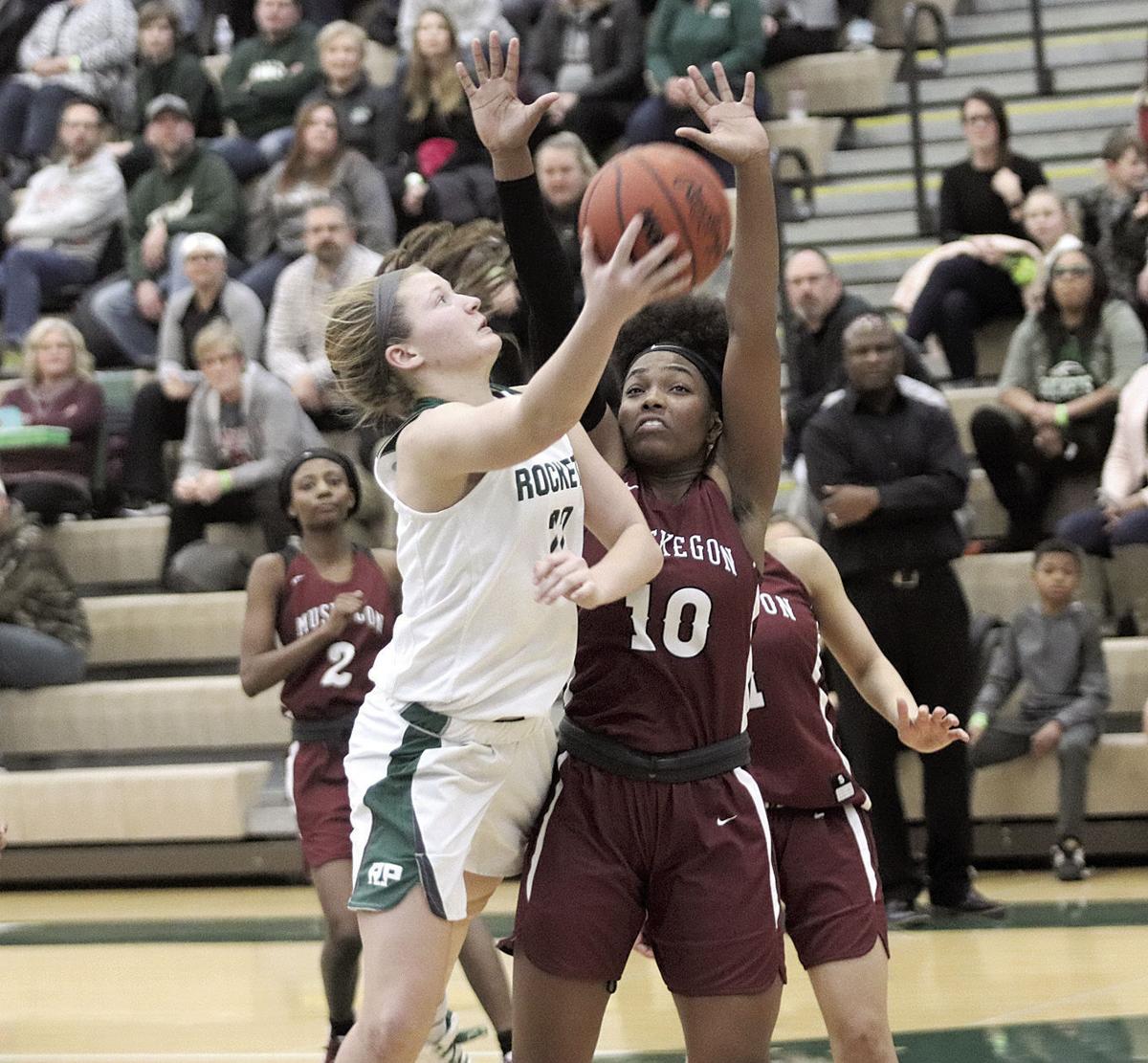 Reeths-Puffer’s Lauren Ross (left) puts up a shot against defense by Muskegon’s Kailyn Nash during a game last season. Ross’ brilliance was a constant for the Rockets in her four-year varsity career, making her among the most memorable R-P athletes since 2012.

Reeths-Puffer’s Lauren Ross (left) puts up a shot against defense by Muskegon’s Kailyn Nash during a game last season. Ross’ brilliance was a constant for the Rockets in her four-year varsity career, making her among the most memorable R-P athletes since 2012.

Reeths-Puffer has had some truly special athletes over the past eight years since I arrived in the area. The individual accolades they’ve compiled over the years, while competing among the biggest schools in the state, have been impressive. Many of those athletes stand out in my mind for one reason or another. The following is a compilation of only a handful of the most memorable Rockets I’ve seen in action since 2012.

Camaryia Williams - Whatever cliché you want to use about big things and small packages, Camaryia Williams probably heard them all in her time at Reeths-Puffer. Despite being one of the smallest players on the basketball court in any given game, Williams was never afraid to mix it up with the bigger girls, nearly averaging a double-double in the 2013-14 season, with 10.9 points and 9.5 rebounds a game, and adding a 13/8 the following year, with five steals per night to boot. She earned all-conference honors both times and was among the most physical and fearless players in the area. Williams was also an excellent track athlete, earning a regional championship in the 300-meter hurdles as a senior and a Meijer all-star meet title in the same event as a junior. She won three individual city titles and also contributed to some very good sprint relay teams at R-P, winning several city titles in those events too.

Maryssa Depies - No one ran distance better during her four years than Maryssa Depies, who led the Rockets’ cross-country and track teams to success. Depies broke the 3,200-meter school record so many times that it’s impossible to keep count, and memorably starred in the city meet as a junior in 2016 by setting meet records in all four of her events. She qualified for state three times in cross-country and raced in four state finals events, including three qualifications in the 3,200. She finished second as a junior and third as a senior, running her two best career times in those races. Depies also played tennis for the Rockets. Depies went on to run at Hillsdale College.

Jake Lofgren - Even Jake’s soccer coach, Keith Knapp, who was also a goalkeeper, was befuddled by Lofgren’s relish in competing in shootouts. There was no denying the results, though; Lofgren’s unflappability in that high-stress event led the Rockets to the program’s first two district championships in 2016 and ‘17, including an incredible upset of then-No. 2 Spring Lake in the ‘16 district semifinals. He earned honorable mention all-state honors for his work that season, and as a senior, became R-P’s career record holder for shutouts, with 23. His goals-against average was a sparkling 1.59 in his senior season. Lofgren was also a valuable piece of an undersized Rockets’ basketball team during his R-P career. He now plays soccer at Dayton.

Nate McCrary - Reeths-Puffer football has pretty much constantly had a speed demon all-purpose athlete on its team in my time here, so McCrary can almost be a stand-in for your Swiss army knife of choice. He was spectacularly dangerous with the ball in his hands. Twice in his senior season of 2016, he created a huge play out of essentially nothing in the final minutes to set his team up to win games; the fact that the Rockets fell short both times didn’t diminish how remarkable they were. McCrary averaged an incredible 41.5 yards per return on 10 kickoffs in ‘16 and earned all-conference honors with over 1,100 yards of offense and 10 touchdowns that season. McCrary was also a sprinting ace, earning three all-state honors as a senior to go with one earned as a junior. He currently plays football at Saginaw Valley State and also ran track as a junior.

Makayla Thompson - Rarely has a prep athlete exploded out of the gates as Makayla Thompson did at Reeths-Puffer. In her freshman season of 2016, she struck out 314 batters, posted a 0.83 earned run average and rang up a 22-4 record, picking up honorable mention all-state honors. The southpaw continued her strong work throughout her career, ending up at 23rd on the state’s career strikeout list with 1,141; she once fanned 26 Oakridge batters in an extra-innings battle. Thompson pitched the Rockets to a district title as a senior in 2019. She was no slouch at the plate either, consistently chipping in on offense. Thompson now plays at Kent State.

Parker Aerts - Parker Aerts probably wouldn’t have had to do much more to get on this list after the first time I saw him use the ball to do a front flip to launch a throw-in. It was a move that helped the Rockets score a key goal in a district title victory in 2017. However, Aerts did a lot more than just make throw-ins look cool, especially in his best sport, track and field. Aerts earned all-state spots in both the 110-meter hurdles and the 400 relay in his junior and senior years, and also picked up all-state spots in the 800 relay as both a junior and a sophomore. That 400 relay team of his junior season, which also included Jalen Ware, Armund Gordon and Nate McCrary, still holds the school record in the event. Aerts was also honorable mention all-state in soccer as a senior due to his scoring ability. He ran track at Central Michigan, but saw his team disbanded by the school this spring after the COVID-19 pandemic did major damage to CMU’s athletic department funding.

Lauren Ross - Lauren Ross’ steady stardom in basketball at Reeths-Puffer wasn’t as flashy as some other players’ work, but it was equally effective, if not more so. Ross was a factor from the get-go, but really came into her own as a sophomore, when she averaged 16.8 points per game and earned the first of three all-conference first team nods. Rockets’ coach Rodney Walker was outspoken throughout this past season that Ross was worthy of being a Miss Basketball finalist; when that didn’t happen, Ross let her play do the talking on the subject, averaging 32 points per game in the Rockets’ three district victories, including 37 in a dramatic comeback win over Muskegon in the finals to deliver the team’s first title in 15 years. Ross, a two-time BCAM’s Best first-teamer and far and away the school’s all-time leading scorer, will play at Western Michigan, having switched from Ferris State after a Bulldogs’ coaching change.

Evan Moskwa - Not the most physically imposing at first glance, Evan Moskwa was far more than he appeared in his time at R-P. There was no questioning his toughness in three seasons as the Rockets’ starting quarterback, as he was known to come back from elbow injuries and play through pain with a brace on his elbow. The Rockets enjoyed winning seasons all three seasons he was under center, and he impressed first-year coach Matt Bird in 2019 with his development, both in throwing deeper downfield and in diagnosing what the defense was showing him at the snap. Moskwa made his biggest headlines, though, in lacrosse, becoming the program’s first Division I signee when he signed up with Cleveland State last winter. His tenacity was especially evident on face-offs, which Moskwa won at an incredible rate, often over 80 percent in a given game. He lit up the scoreboard for over 50 goals in what turned out to be his final season, 2019; one can only speculate what he could have done if his senior season hadn’t been wiped out by COVID-19.

Hunter McCall - Reeths-Puffer’s all-time wrestling wins leader, with 177, Hunter McCall was a Rockets’ team leader for much of his time at the school. Behind McCall, who earned three consecutive city titles in his final three seasons, the Rockets ended Whitehall’s 13-year reign atop the GMAA tournament, and upset the Vikings in the district semifinals to boot. McCall’s Rockets made it all the way to the state semifinals, and McCall himself seized a state championship — the first for the Rockets under veteran coach Matt Brink — with an impressive run through his bracket. The title was McCall’s third all-state honor. The Rockets’ star also played football and lacrosse.

Elysia Mattos - Despite not having the height you’d expect for either sport, the 5-5 Mattos starred for the Rockets in both soccer and basketball. A four-year starter at keeper, Mattos is among the career state leaders in shutouts, helped the Rockets claim the 2014 district title as a freshman, and was third team all-state as a senior. Her heart was in basketball, where she was a strong point guard and good shooter for a Rockets team that was consistently in the running for conference and district titles during her time. Mattos earned first team all-conference honors as a senior in 2016-17 and moved on to play for Muskegon Community College — where she helped MCC to its first state title in the sport in 27 years — and later NAIA Rochester University, both alongside Rockets’ teammate Delaney Bolles.