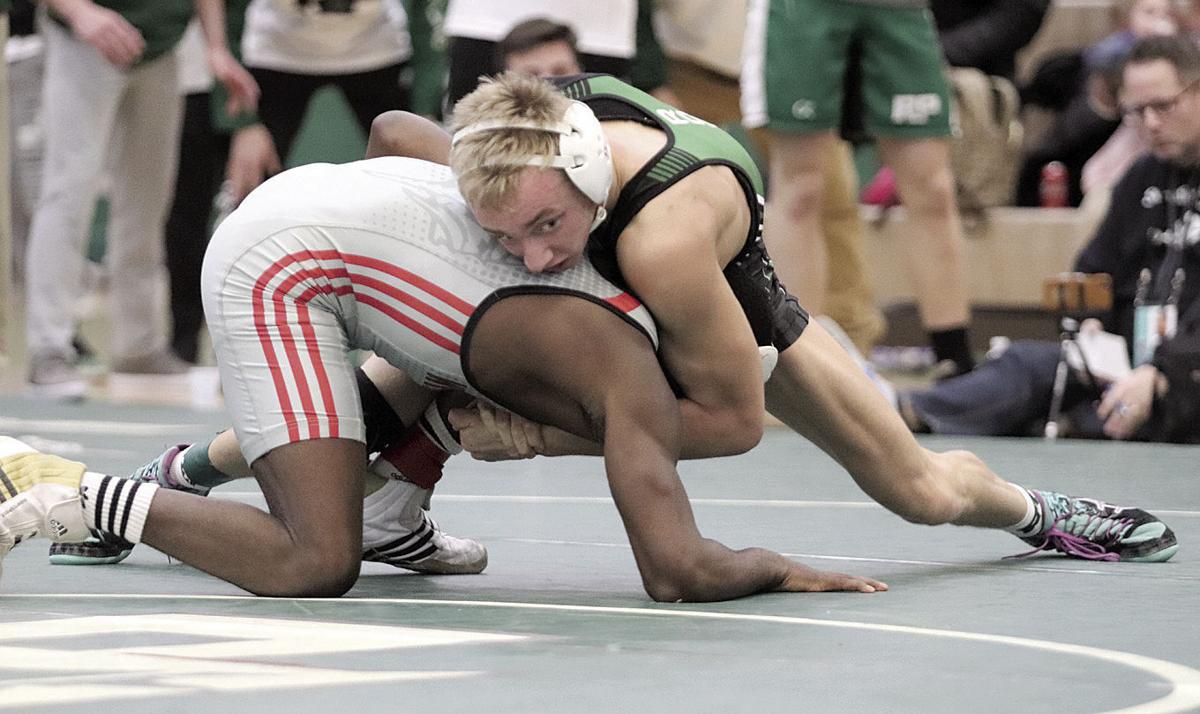 Reeths-Puffer’s Kaden Edwards (right) works against Whitehall’s Marco Moore during February’s district semifinal match at R-P. The Rockets’ upset victory in this matchup was among the most memorable R-P contests in the past eight years. 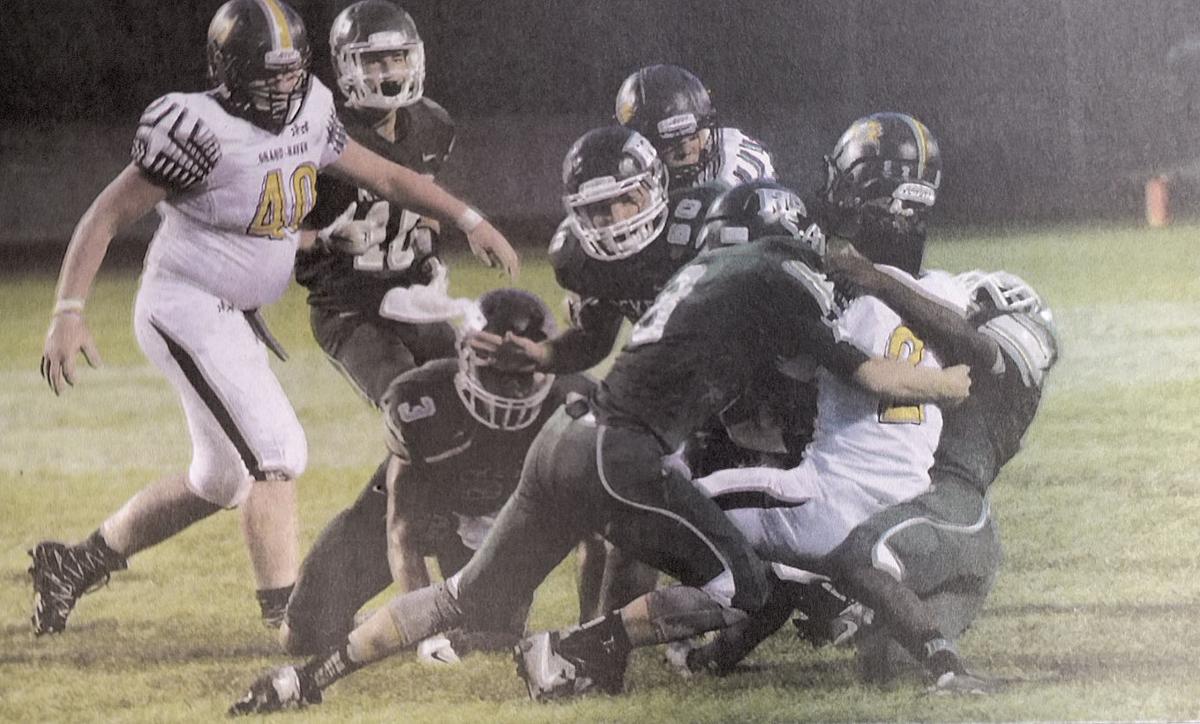 Reeths-Puffer and Grand Haven engage in hard-hitting football during their 2016 meeting. This game ended in controversy due to a pivotal penalty called against the Rockets on what would’ve been a game-winning play, and the fact that a similar scenario played out again later that season makes the two games among the most memorable since 2012.

Reeths-Puffer’s Kaden Edwards (right) works against Whitehall’s Marco Moore during February’s district semifinal match at R-P. The Rockets’ upset victory in this matchup was among the most memorable R-P contests in the past eight years.

Reeths-Puffer and Grand Haven engage in hard-hitting football during their 2016 meeting. This game ended in controversy due to a pivotal penalty called against the Rockets on what would’ve been a game-winning play, and the fact that a similar scenario played out again later that season makes the two games among the most memorable since 2012.

Considering I don’t get to as many Reeths-Puffer games as I’d like, it’s incredible how many memorable contests I’ve seen involving the Rockets in my eight years on the beat here. For space reasons, I didn’t get to include all the ones that stood out when going through my memories of the best. Most of these Rockets’ games were memorable for the on-field reasons you’d expect, although a couple of them were wild for other reasons too. Here’s a rundown of some of the games that have stood out to me in eight years.

Reeths-Puffer vs. Whitehall, wrestling district semifinals, 2020 - This was technically a district semifinal match, but with these two teams the only ranked squads in their region, it was a de facto regional final, and the atmosphere matched it. The Rockets came up with wins in virtually every match that each team’s coaches had identified as ‘swing matches’ heading in, and won the match 34-30. The Rockets’ Colby Stephenson was matched up with Whitehall’s Jarrean Sargent in a match designed to have Sargent avoid Hunter McCall — and Stephenson delivered a pin victory. Twice, officials had to discuss whether a last-second move had changed the outcome of a bout. Twice more, a wrestler who was tied or trailing scored a pin to swing a bout. The Rockets would ride the wave of this win all the way to the state final four.

Reeths-Puffer vs. Ludington, boys soccer district finals, 2016 - Already having pulled off an incredible upset, via shootout, of No. 2 Spring Lake in the semifinals, Reeths-Puffer took it to the limit again in the finals against Ludington before winning 2-1. The lone Rockets’ goal came from Dylon Art, on an assist by Matt Udell, which tied the score. The drama, though, came in the shootout, which keeper Jake Lofgren won for his team by coming up with two saves in the eight rounds. The win gave the Rockets their first-ever district title in the most dramatic of fashions.

2016 GMAA track meet - Unbreakable records don’t get set very often, but on this night in Holton, Reeths-Puffer junior Maryssa Depies set one. The Rocket girls won the city title going away, but that was almost an afterthought as Depies set city meet records in all four of the events she raced — the 800, 1,600 and 3,200-meter runs and the 3,200 relay. Since MHSAA rules limit track athletes to four events per meet, Depies’ accomplishment literally cannot be topped. The crazy thing about this feat was how easy it all seemed; Depies wasn’t remotely challenged in any of her races and her smallest margin of victory was six seconds, in the 800. She announced after the meet that she was treating herself to “a big bowl of ice cream” in celebration, which was probably the most wholesome quote I’ve ever gotten in this job.

Reeths-Puffer vs. Grand Haven and Reeths-Puffer vs. Jenison, football, 2016 - The 2016 Rockets are literally the only possible answer to anyone who asks me, ‘What’s the most snakebitten team you’ve ever covered?’ Twice this season, the Rockets lost games in large part due at least in part to clear and pivotal officiating errors in the final minutes. First came the opener against Grand Haven, a 21-20 Bucs’ win. The Buccaneers scored a go-ahead touchdown with just a couple of minutes to go to move ahead 21-14, but Nate McCrary scooped up the kickoff and somehow weaved his way to the Grand Haven 10-yard line to get his team in position to tie it up. R-P scored a touchdown, but a failed PAT snap sent the team scrambling. Somehow, the Rockets were able to turn that mess into a two-point conversion pass, only to have it called back on an ineligible-receiver-downfield penalty. R-P then missed the PAT and lost by a point. The only problem was, a screenshot from the Rockets’ game film (posted on Twitter the next day) showed that no ineligible receivers were downfield, or even close. It was a bitter opening defeat.

The Jenison homecoming contest several weeks later, an 11-8 Wildcats’ win, was just as hard to swallow. In a rain-soaked mess of a game, the Rockets punted late in the game with the score tied at 8 and committed a 15-yard kick-catch interference penalty. Despite the fact that the rule specifically does not allow the receiving team to force a rekick on such a penalty, officials allowed Jenison that option, and the rekick was blocked, setting up an easy Wildcats’ field goal. Somehow, McCrary pulled another rabbit out of his hat on the ensuing drive, reversing his field and getting all the way to the 10-yard line to set the Rockets up for a win. On the final play, McCrary went up the middle and was ruled short of the goal line, although then-Rockets’ coach Kyle Jewett said his team was adamant McCrary had scored. Time ran out, and the Rockets lost. R-P went 4-5, and those two defeats cost the Rockets a playoff berth. I can’t even imagine how the guys in green felt when that season was over.

Reeths-Puffer vs. West Ottawa, girls soccer, 2016 - If I’m being honest, this game isn’t on this list because it was a great game, although it was certainly a tight one; it ended in a 1-1 tie, with Mackenzie Goltz scoring R-P’s lone goal on a penalty shot. This game will always be memorable to me because it was the most miserable game weather I’ve ever experienced. Temperatures were below freezing for this mid-March contest, and a steady rain fell the whole game. It was so icy cold that when I lowered my umbrella after the game, ice that had caked on top of it fell to the ground. I’ve long felt anyone who paid for admission to that one deserves some sort of medal.

Reeths-Puffer vs. Oakridge, girls basketball, 2013 - Let’s get some positive vibes going. This holiday tournament game, a 67-62 Rockets’ overtime win, was incredibly fun to watch. With her team down by 11 at one point in the fourth quarter, Kalisa Williams basically took over the game for the Rockets down the stretch, scoring 18 of the team’s final 20 points and 30 points total in the game. Williams went on to a first team all-conference season and would’ve had another one in 2014-15 if not for an early-season knee injury.

Reeths-Puffer vs. Union, boys basketball, 2017 - Here’s another one from the ‘memorably weird’ file. Reeths-Puffer, not yet on its way up, had lost by 44 points to the Red Hawks in the team’s first meeting, but for some reason, Union decided to take the air out of the ball in the fourth quarter of this one, hanging on for a 47-43 victory. Freshman Emcee Wiliams led a game R-P effort with 14 points. The fireworks took place after the game, when Union coach Brandon Guyton, evidently displeased about something he’d heard from the Rockets’ bench, got into it with R-P coach Lance Johnson before his own assistants talked him out of the gym. Very strange ending, although it showed the Rockets weren’t going to be doormats much longer.

Reeths-Puffer at Grand Haven, softball district finals, 2019 - The loss of this year’s spring sports season meant, among other things, that the Rockets were unable to defend their district title, which they won in an exciting 5-2 battle against Grand Haven. Makayla Thompson took a no-hitter into the fifth inning and struck out nine, including a bases-loaded K to keep the Bucs from tying the game in the sixth. Sydney Edwards hit a home run in the seventh for a key insurance run. It was R-P’s first district title since 2010, and it set off an emotional celebration on the field.