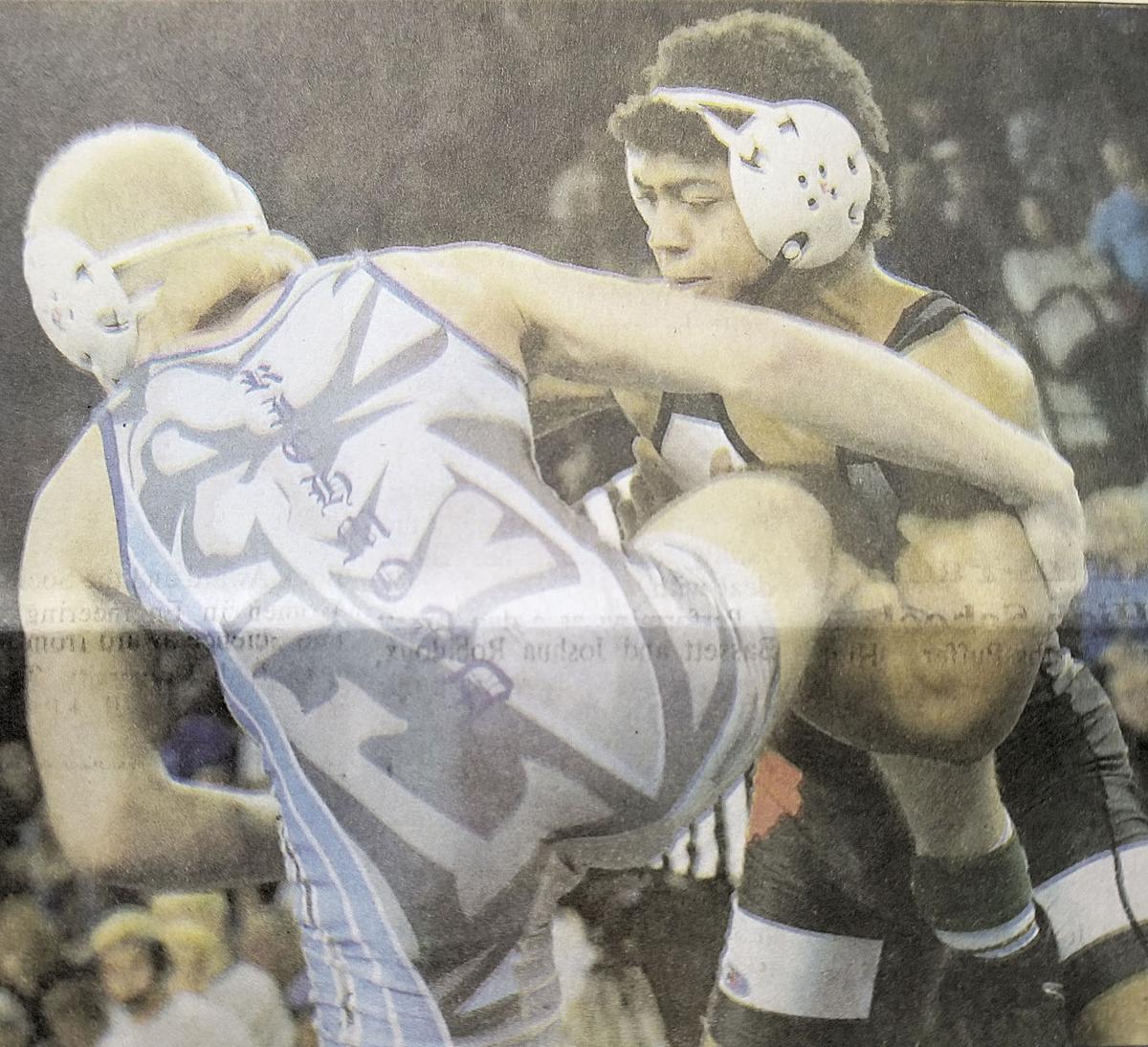 Whitehall’s Jwan Britton (right) goes for a takedown against Richmond in the 2016 state quarterfinal match in 2016. Britton’s victory in this match was part of the Vikings’ dramatic comeback from down 29-9, one of the most exciting Viking matchups since 2012. 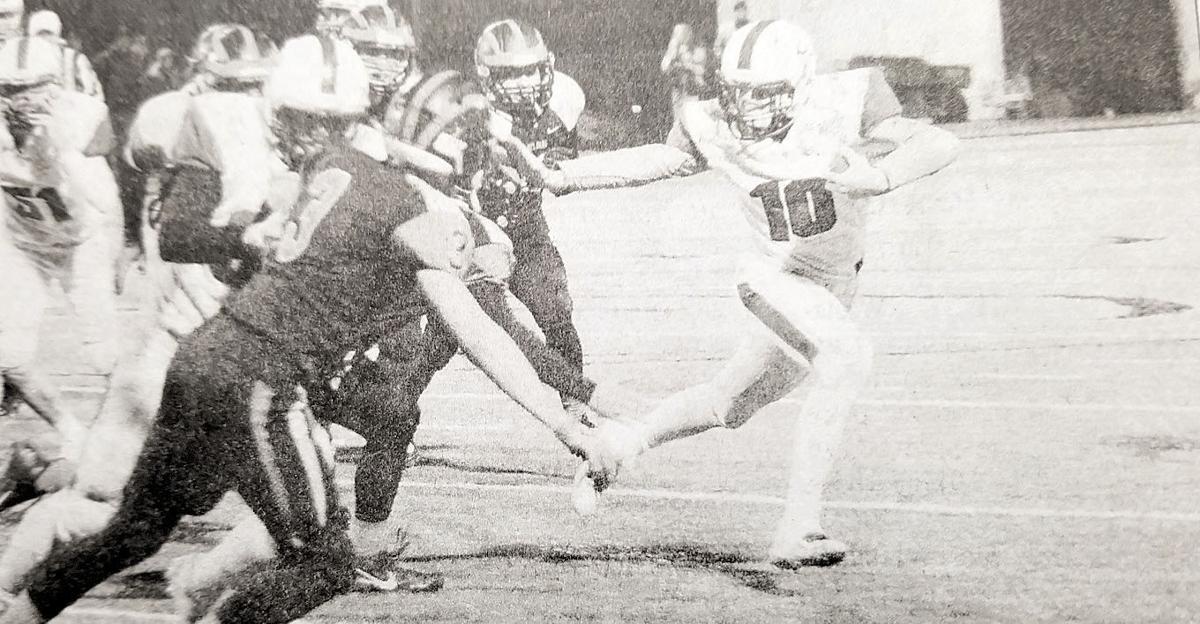 Whitehall’s Kayleb Venema (right) stiff-arms a Belding defender during a 2017 playoff game. The game was the wackiest of several thrilling playoff games Whitehall has been involved in over the past eight years.

Whitehall’s Jwan Britton (right) goes for a takedown against Richmond in the 2016 state quarterfinal match in 2016. Britton’s victory in this match was part of the Vikings’ dramatic comeback from down 29-9, one of the most exciting Viking matchups since 2012.

Whitehall’s Kayleb Venema (right) stiff-arms a Belding defender during a 2017 playoff game. The game was the wackiest of several thrilling playoff games Whitehall has been involved in over the past eight years.

As part of this best-of series, I’ve been going back and revisiting some of the best and most memorable sporting events I’ve covered since arriving here in 2012. Here, I’ve compiled a list of some of the most thrilling Whitehall events among those.

This list is by no means exhaustive — I’ve been fortunate to see a slew of terrific games involving Whitehall in eight years — but it’s a good sample of the best games of that time frame. Let’s get to it.

Whitehall vs. Comstock Park, football district finals, 2014 - It’s almost six years past now, and I still haven’t figured out how this happened. Facing a terrific Comstock Park squad that had played in the semifinals the previous three years, Whitehall fell behind 30-7, and media members with me on the sideline were audibly wondering if we’d see a running clock. Instead, we saw one of the most dramatic comebacks in state history, as the Vikings flipped a switch and rallied to win 41-36. Riding running back Trip Thommen and a suddenly stingy defense to the comeback, Whitehall scored late in the fourth quarter — after forcing a fumble that thwarted Comstock Park’s chances of running out the clock — and staved off a last-ditch drive by the Panthers to claim just its second district title ever.

Whitehall vs. Richmond, wrestling quarterfinals, 2016 - Speaking of dramatic in-game turnarounds, this one ranks with anything I’ve seen in eight years here. Whitehall was trailing 29-9 in this match when Dominick Haynes’ stunning pin of Richmond star Graham Barton set off a chain reaction of victories like nothing you’ve ever seen. After Haynes’ upset, stars Reiley Brown and Jwan Britton followed with wins, and Josh Thommen’s victory in the next bout put the Vikings ahead for good in a match they ultimately won 37-29. I’ve seen plenty of matches that were as good, but none that were crazier.

Whitehall at Cadillac, volleyball quarterfinals, 2012 - This remains the loudest volleyball match I’ve ever covered. As fate would have it, Cadillac got to host the Vikings in the state quarterfinals, and every point was spectacularly tense. Whitehall dropped two of the first three games, but dug deep and managed to eke out wins in games four and five to come away with a 25-27, 25-18, 17-25, 25-23, 15-13 win. Autumn Christenson basically put the team on her back late in what I have to think was her best career match considering the stage, taking almost every spike in game five and racking up 27 kills and 18 digs on a .429 hitting percentage.

Whitehall vs. Traverse City Christian, boys soccer regional finals, 2013 - Whitehall’s best season since I got here brought with it the Vikes’ most exciting win in that span, as they pulled off a 2-1 victory. Sophomore Daniel DuBois scored the winning goal with 11:32 to go, and Windsor Marecek also scored in the game. TCC’s lone goal came on a deflected ball. Equally thrilling was Whitehall’s next game, a 1-0 semifinal defeat to Grand Rapids South Christian in which the only goal was on a Sailors’ penalty kick.

The most memorable Reeths-Puffer games since 2012

The most memorable Reeths-Puffer athletes since 2012

Whitehall vs. North Muskegon, boys basketball, 2016 - One of the things I’ve most enjoyed about putting this together is remembering fantastic games I’d forgotten about, like this dramatic comeback. This one turned Whitehall’s gym into a madhouse late, as the Vikings erased a 14-point second-half deficit and pulled off a 73-71 thriller in overtime against a team that would spend the next couple of seasons battling with Whitehall for WMC supremacy. Luc Schumm scored the winning basket with five seconds to go in overtime off a C.J. Watson assist; Watson had a terrific game this night, going for 25 points and 14 rebounds.

Whitehall at Belding, football pre-districts, 2017 - Whitehall has made a near-annual tradition out of playing crazy football playoff games (see the top of this list, as well as the games against Chippewa Hills in 2015 and Allendale in 2018) and this one was the wackiest of them all. Belding won 38-36, taking the lead for good to start the third quarter, but that doesn’t do justice to how weird the game was. There were three surprise onside kick attempts, all unsuccessful, as well as a 70-yard punt return score by the Vikings’ Terrell Harris. Whitehall nearly scored a go-ahead touchdown late in the game on a run by Tylor Russell, but he was ruled short of the goal line, and the Vikes were stuffed on fourth down. The Black Knights later clinched the game by daringly going for it on fourth-and-10 near midfield and converting in the final minutes.

Whitehall vs. North Muskegon, boys soccer WMC finals, 2018 - Unfortunately, I could’ve picked any of several Whitehall postseason shootout defeats here; Whitehall has had remarkably poor luck in shootouts. I went with this one because it lasted longer than any shootout Vikes’ coach Bryan Mahan could recall — 11 rounds of penalty kicks. The Norsemen came away with the win after round 11 went their way. The game was remarkably well-played. Brett Evans and Julian Pruett scored Whitehall’s two goals, the latter of which tied the score with nine minutes to go in regulation. The contest doubled as the last WMC tournament game for the foreseeable future, as the league decided to stop playing the tournament following the school year and just determine the conference champ by regular-season record.

Whitehall at Montague, boys basketball, 2018 - There have been many great games in this rivalry, so to limit myself, I went with one — this fast-paced double-overtime shootout early in the 2018-19 season that the Vikes won 61-58. Addison Bluhm and Terrell Harris hit late free throws that proved to be the difference. Ethan McKenzie posted a 16-point, 16-rebound double-double, and Harris and Andrew Durbin each chipped in 16 points.

Whitehall vs. Grand Rapids Catholic Central, wrestling regional semifinals, 2013 - This battle of titans matched the #3 Vikings against #4 GRCC, and the match lived up to the billing. Each team’s stars mostly did their job, but the swing match came at 103 pounds, where freshman Reiley Brown delivered an upset of GRCC star Kole Krauss, who had beaten Brown two times earlier that season. Brown’s major decision in that bout proved the difference in a thrilling 31-24 win that propelled Whitehall to the state final four.