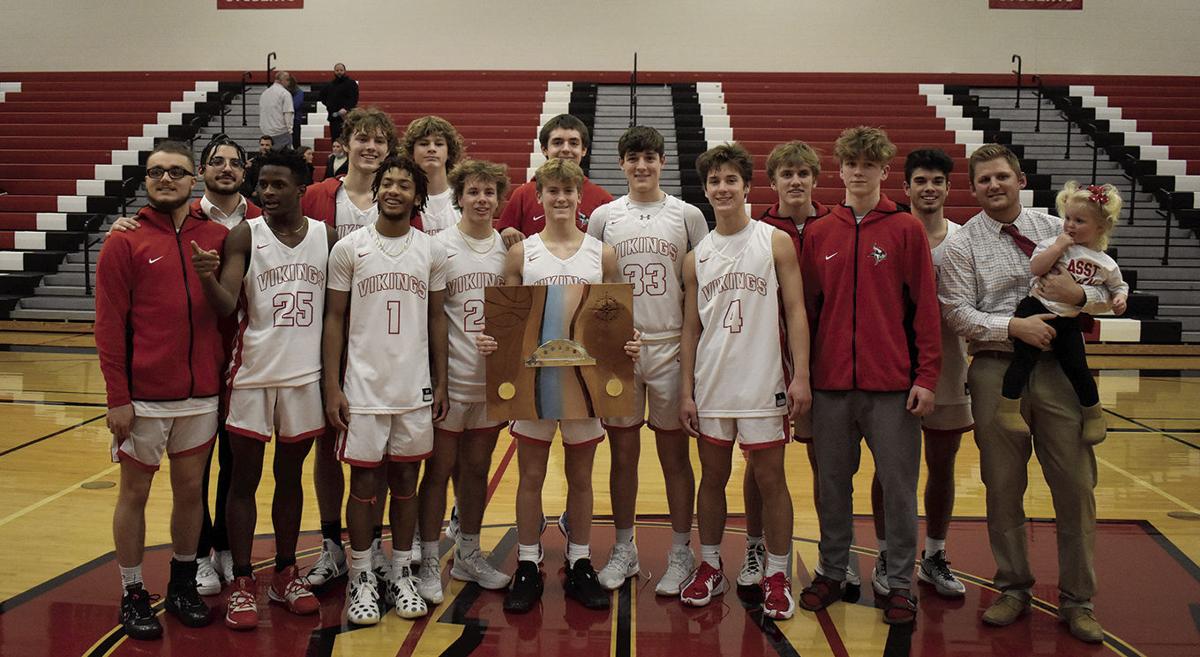 The Whitehall boys basketball team poses for a photo with the new traveling trophy created this year for its rivalry with Montague. The Vikings were the first team to win the trophy, defeating Montague 53-43. 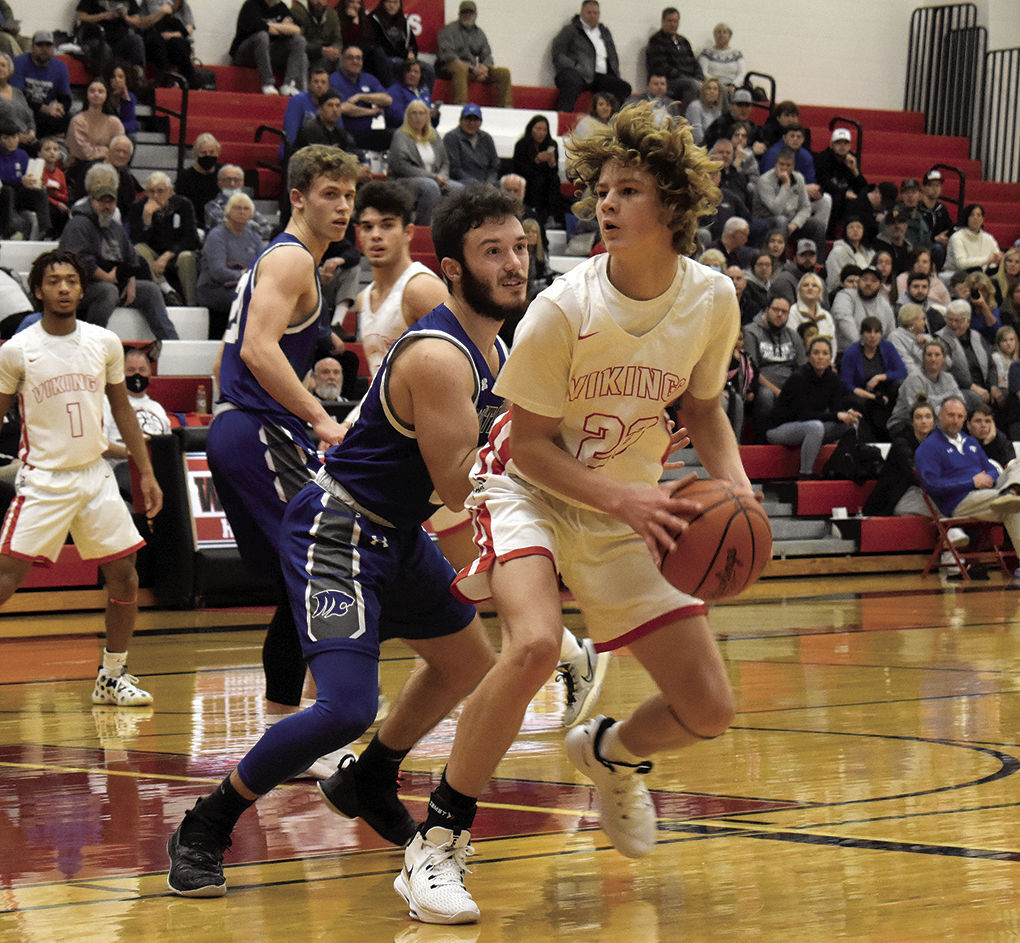 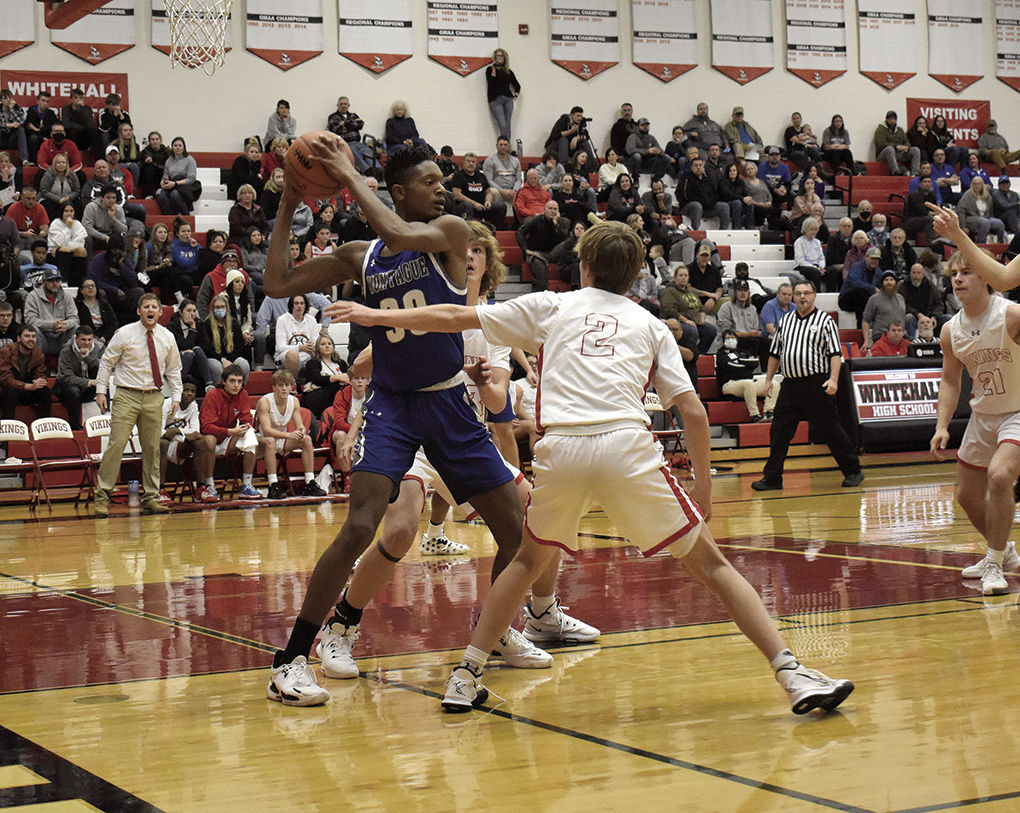 Montague’s Isaiah Atchison (with ball) tries to get out of a double team from Camden Thompson and Jack Houtteman (2) during Tuesday’s WMC game at Whitehall. The Vikings won, 53-43.

The Whitehall boys basketball team poses for a photo with the new traveling trophy created this year for its rivalry with Montague. The Vikings were the first team to win the trophy, defeating Montague 53-43.

Montague’s Isaiah Atchison (with ball) tries to get out of a double team from Camden Thompson and Jack Houtteman (2) during Tuesday’s WMC game at Whitehall. The Vikings won, 53-43.

WHITEHALL — There was more than just wins and losses at stake when Whitehall hosted its rival Montague for the first time this season. Tuesday night’s matchup marked the unveiling of a new traveling trophy to be awarded after each contest between the two.

The Vikings claimed the hardware in this bout, taking down the Wildcats 53-43 in what proved to be a physical contest.

“It’s great to win it the first time,” Whitehall head coach Christian Subdon said. “I told the kids before the game if it was a golden pencil we were playing for or just a number 2 pencil, I want to win it. That’s just the type of competitor I am and the type of competitors we have on the team. All of a sudden when I tell them there’s a trophy, it’s ramped up and they want it. I can’t teach that.”

Whitehall jumped out to a 12-6 lead in the opening quarter on the strength of a stingy defensive game plan. Often employing the full-court press, Subdon’s club kept their hands in the passing lanes, resulting in a heap of turnovers and just two baskets and a pair of free throws allowed.

The second quarter saw Montague start to push back on the offensive side, led by senior Tugg Nichols who finished the first half with a team-leading six points. The Vikings were able to weather the storm, however, matching their first quarter total to finish with a 24-16 lead heading into halftime.

There seemed to be a bit of a momentum swing coming out of the break, mostly due to the amount of missed free-throws by Whitehall. The Vikings made just two of their nine attempts in the third.

“I don’t know what it is, but we’re just not great at the line right now,” Subdon said. “I never really said, ‘Hey, you gotta make the free throws’, I just said, ‘I know they’re gonna go’ and they did. We made enough to make them count.”

Sophomore Kyle Stratton, who recorded a team-best 15 points, and freshman Camden Thompson, who had nine points in his first game back from injury, did make them count in the fourth quarter as Montague attempted to climb back. Often having to opt for intentional fouls to send the Vikings to the line, Stratton and Thompson went 8-of-14 from the line to close the Wildcats’ chances.

“Kyle Stratton came down the stretch and made at least four free throws and those were big,” Subdon said. “If we miss those, those are free possessions. Kyle had a bad first game shooting free throws, then all of a sudden he’s been our guy. I wanted him to get the ball at the end.”

Montague coach David Osborne said he was disappointed less with the defeat than that Whitehall, in his view, played harder than his own team.

“I am very disappointed in our effort and intensity tonight,” Osborne said. “Whitehall wanted it more than us and it showed.”

With the win, Whitehall bounced back to .500 at 3-3, but more importantly, the Vikings improved to 2-1 in conference play. Montague suffered its first loss of the year, falling to 3-1 overall.

“The good thing about a basketball season is it’s long,” Subdon said. “We can fix the free throws. We can’t fix not playing hard, not rebounding and not wanting it. We have all those things, now we just need to fix a couple of other things.”