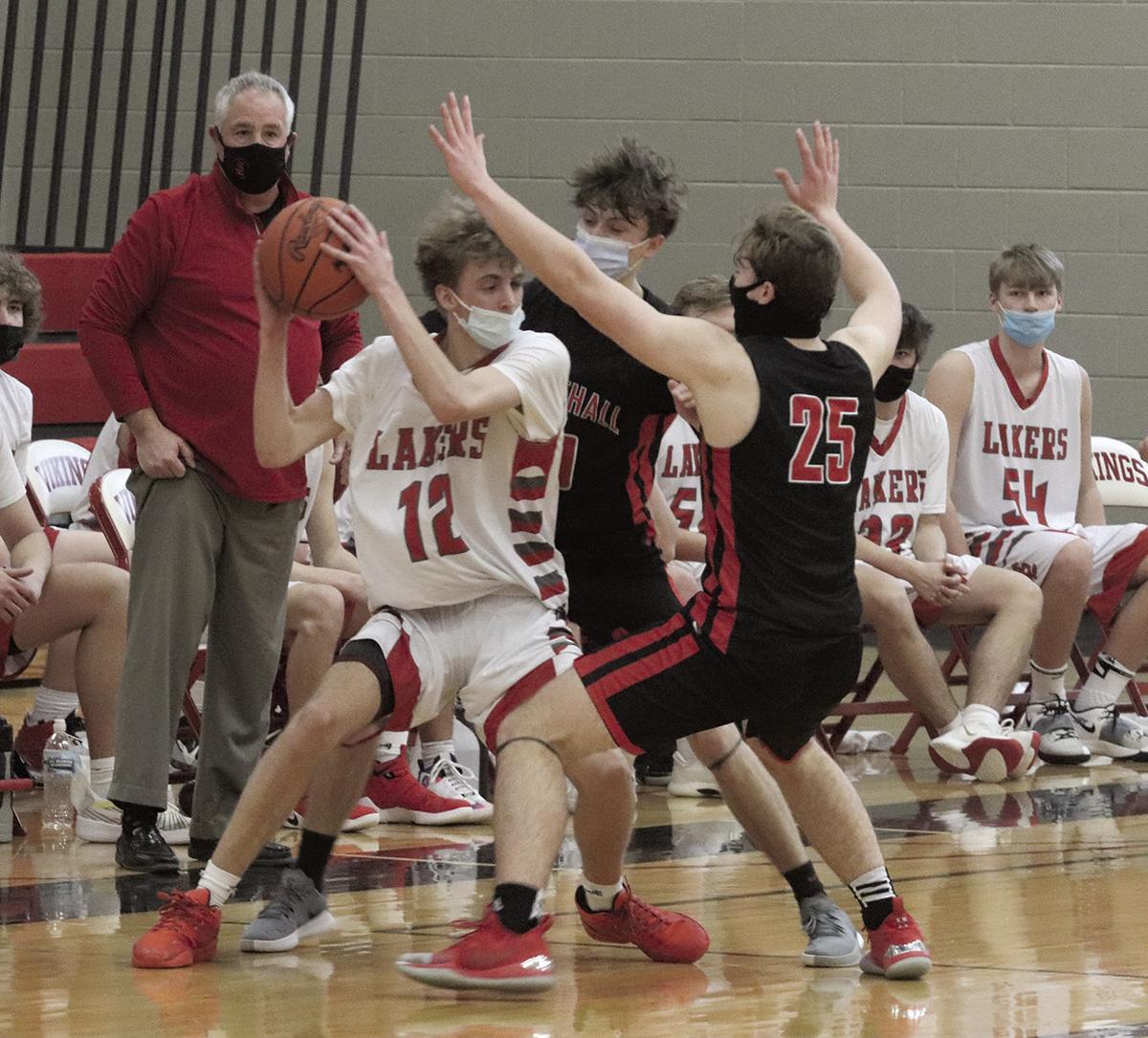 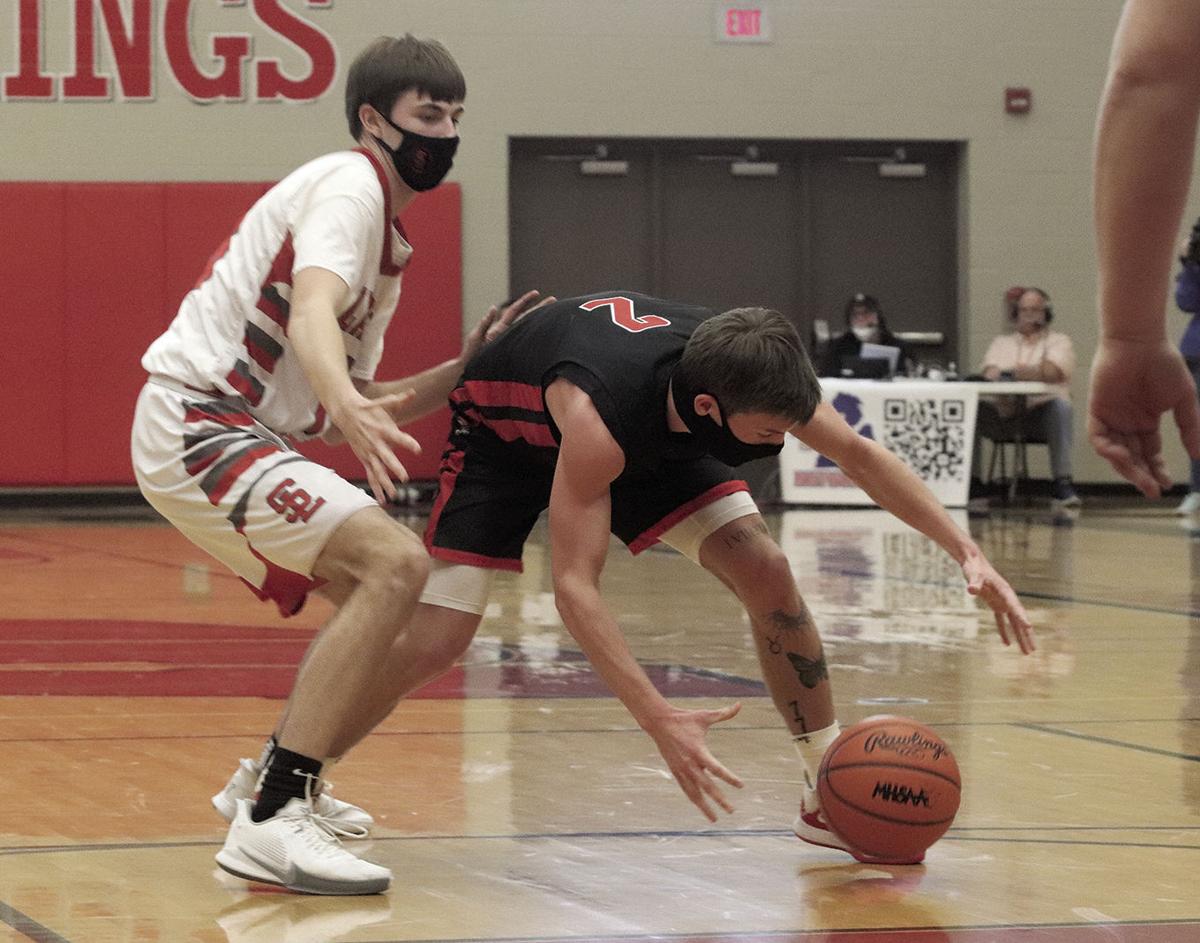 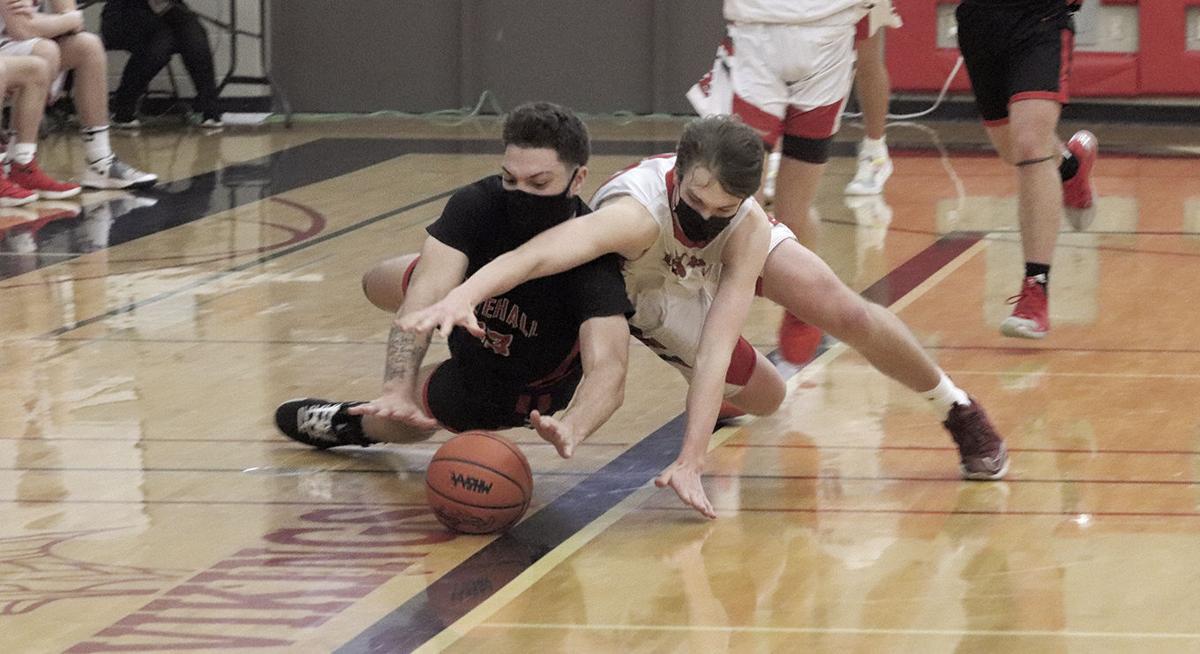 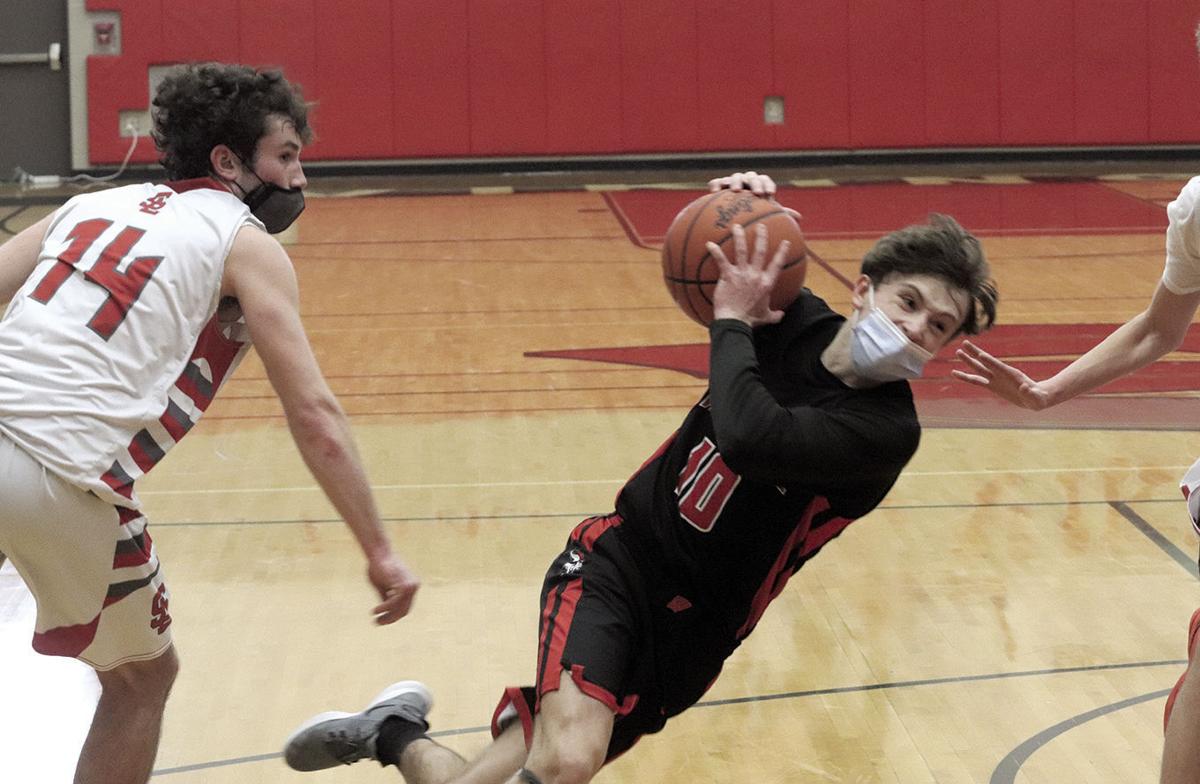 Whitehall's Addison Blum (10) goes down after being fouled by Spring Lake's Sam Sheridan during Saturday's district finals game at Whitehall. The Lakers won, 54-43. 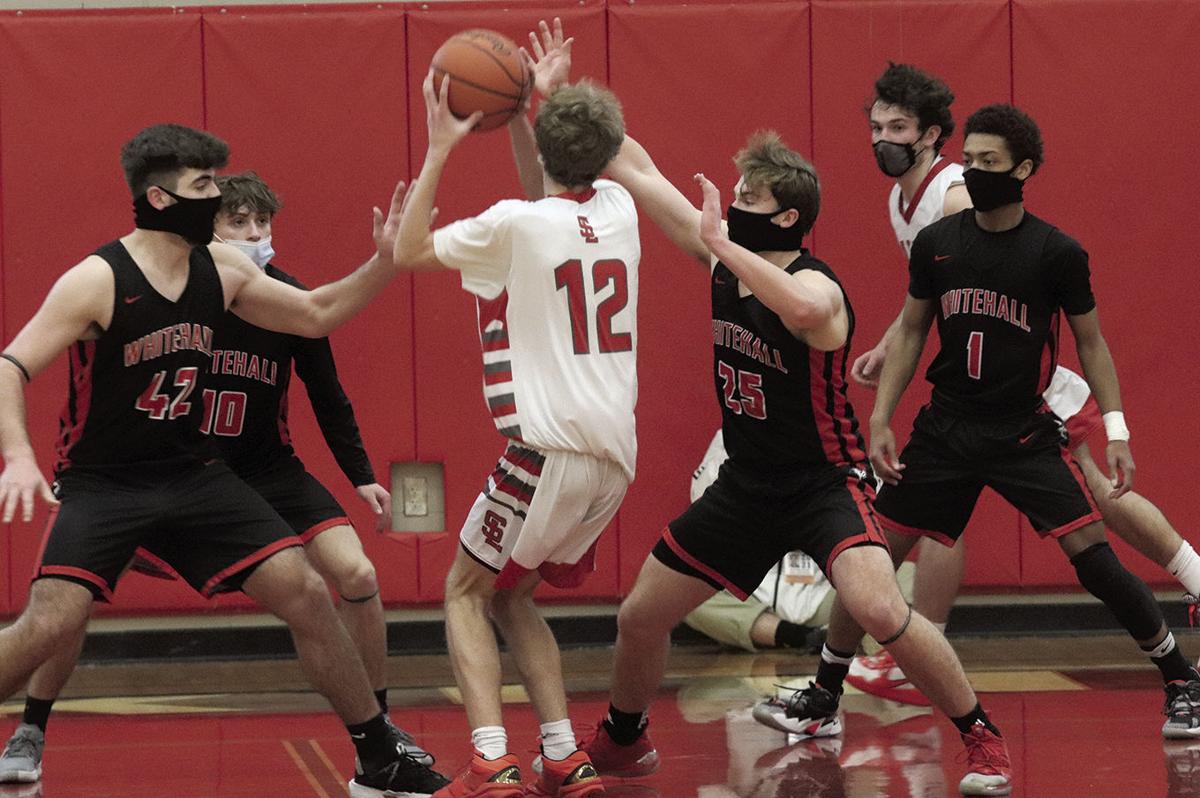 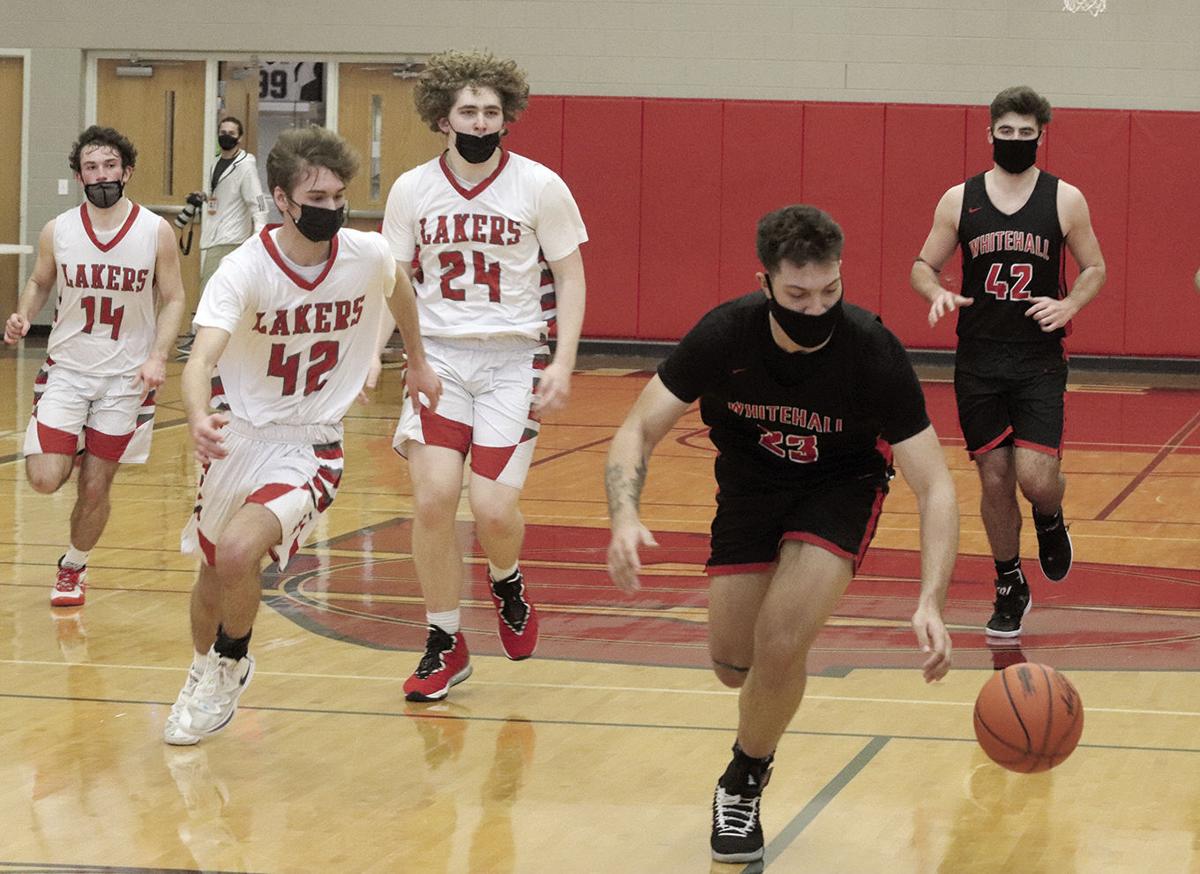 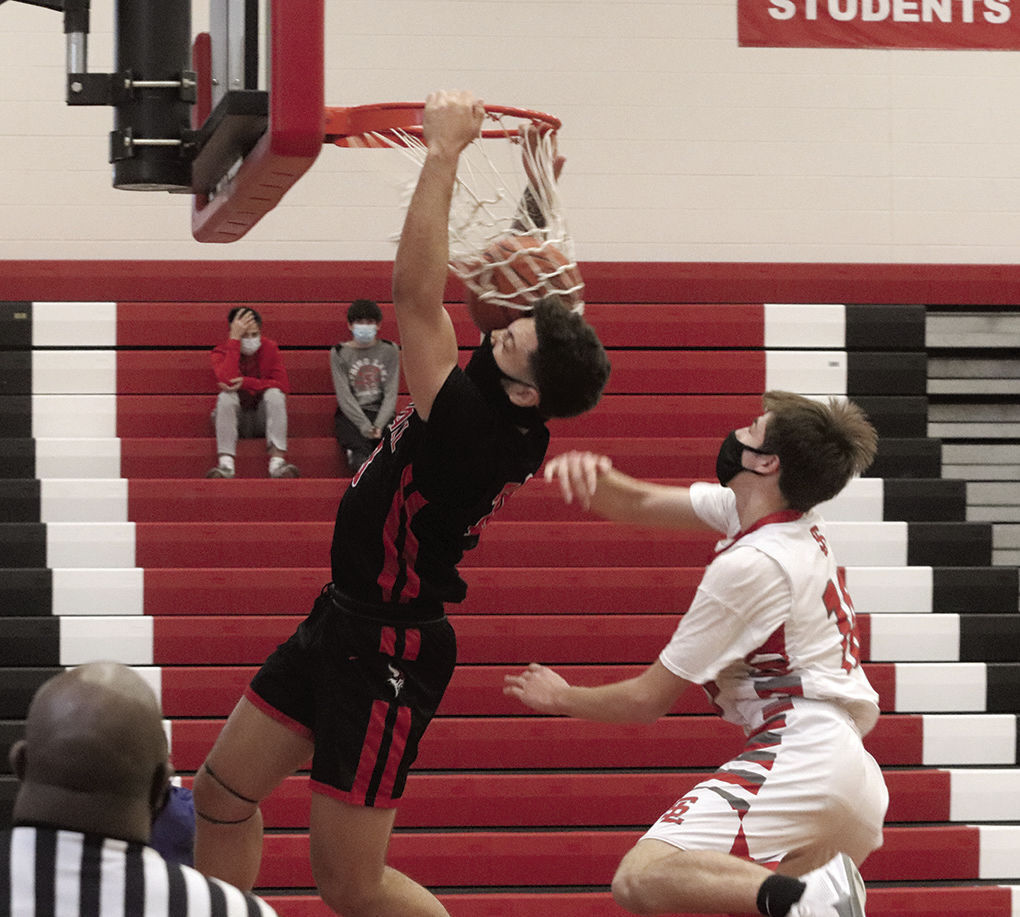 Whitehall’s Dayton Cole dunks the ball after being fouled by Spring Lake’s Jackson Core during Saturday’s district finals game at Whitehall. Cole had 20 points, but the Lakers won 54-43. 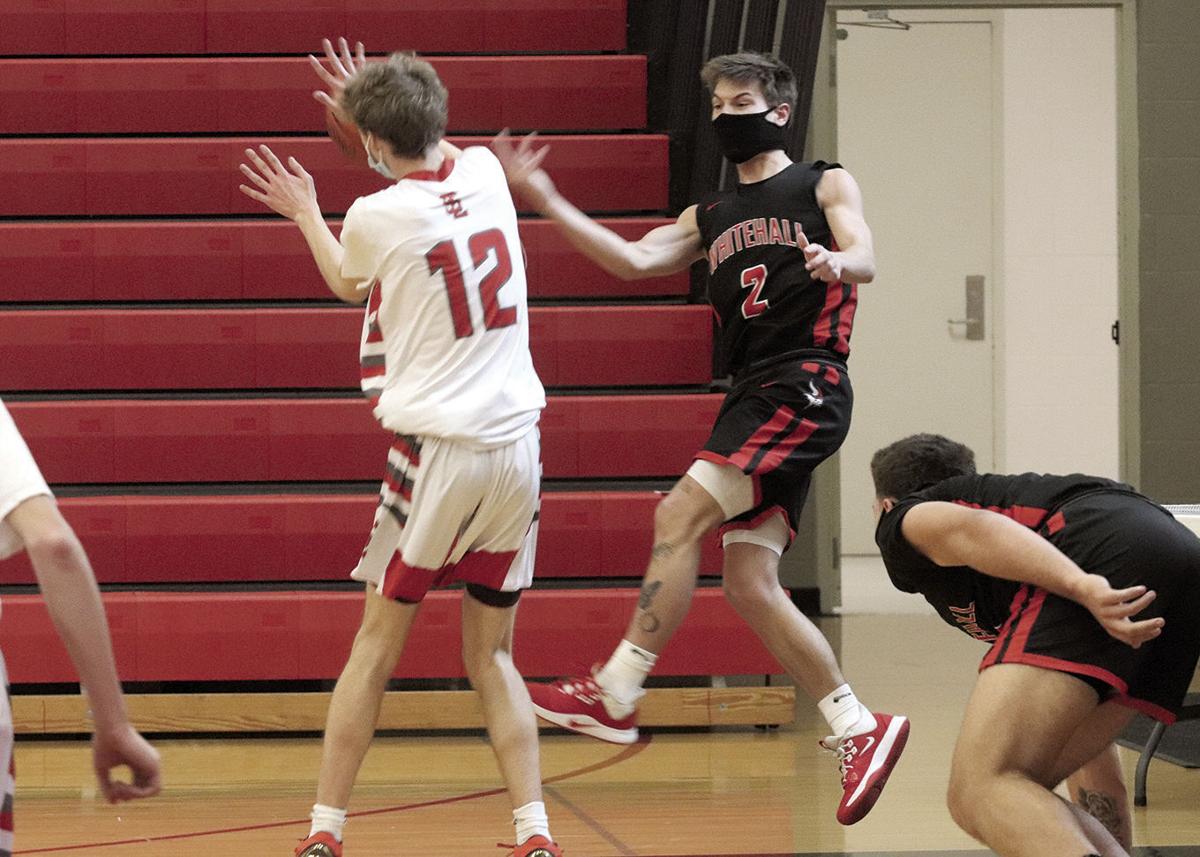 Whitehall’s Caleb Koch (2) tries to save the ball off Spring Lake’s Kaden George during Saturday’s district finals game at Whitehall. The Lakers won, 54-43.

Whitehall's Addison Blum (10) goes down after being fouled by Spring Lake's Sam Sheridan during Saturday's district finals game at Whitehall. The Lakers won, 54-43.

Whitehall’s Dayton Cole dunks the ball after being fouled by Spring Lake’s Jackson Core during Saturday’s district finals game at Whitehall. Cole had 20 points, but the Lakers won 54-43.

Whitehall’s Caleb Koch (2) tries to save the ball off Spring Lake’s Kaden George during Saturday’s district finals game at Whitehall. The Lakers won, 54-43.

WHITEHALL — After high-flying Orchard View was forced to withdraw from the state tournament due to COVID-19 protocols, conventional wisdom had Whitehall, the #2 seed, as the new district favorite. Vikings’ coach Nate Aardema knew better, having seen Spring Lake dash his team’s dreams many a time.

Aardema was, unfortunately, proven right Saturday afternoon, as a tough-minded and composed Lakers’ team shook off its own slow start and stayed with Whitehall for three quarters before finishing with an impressive fourth quarter, earning the district title with a 54-43 win.

The star of the day was Lakers’ junior Kaden George, who evoked memories of his older brother Keegan’s past district heroics against Whitehall with a spectacular 33-point performance, including hitting 17-of-18 at the free throw line.

“Keegan killed us for four years, and now Kaden played unbelievably well,” Aardema said. “He’s a really good player. (Spring Lake coach) Bill (Core) does a great job getting him to spots where he can succeed, and he was great tonight.”

The game appeared to be Whitehall’s early on, as the Vikings (13-4) dominated defensively in the first quarter. Though the offense was slow to pick up, Whitehall held an 11-4 advantage after eight minutes and seemed fully in command.

George, however, came alive after a scoreless first quarter and had 12 points in the second, putting the Lakers in the lead at one point, 16-15, before Whitehall responded with a three-point play on a dunk by Dayton Cole, followed shortly by an Evan Mikkelson trey. The Vikings took a 23-20 lead into the locker room.

Spring Lake wasn’t going to go away, though, and grabbed the lead again early in the third, 27-25. Cole, who had a team-high 20 points and nine rebounds, seemed to put his stamp on the game in the next couple of minutes, scoring three straight points on free throws, stealing the ball while getting fouled, and then getting fouled again on the ensuing possession.

The Vikings were close to getting into the bonus and had the momentum on their side. Spring Lake stubbornly refused to follow the script, though, and the game was still tied at 31 going into the final quarter. Casey Lownds knocked down a three to give Whitehall the lead to start the fourth, but from then on, the Vikings seemed in a hurry to shoot jump shots as Spring Lake continued a season-long opponent strategy of surrounding Cole with bodies.

“There was about a two-minute stretch where we took a couple of quick shots, I think, and had a turnover or two, and they came down and George got a backdoor, I think, and they made another shot, and all of a sudden we were playing catch-up,” Aardema said. “I think we just kind of went one pass and a shot a couple of times and didn’t really make them defend for a full possession. Credit to them, they were able to keep from fouling and their defense was moving their feet. That’s a testament to what they do as much as what we didn’t do.”

An up-and-under reverse layup by Porter Saunders gave Spring Lake a 35-34 lead, and the Lakers never trailed again. With about three minutes to go, the visitors enacted a space-and-stall strategy, and with George getting fouled most of the time, that allowed the junior star to show off his clutch gene by repeatedly draining free throws.

The loss was a sad ending to what was a great career for a bunch of Whitehall seniors. There were eight of them, headlined by Cole, Andrew Durbin (who also had nine boards), Addison Bluhm and Mikkelson. Those four in particular were emotional as they were subbed out of the game for the final time with just seconds to play.

“All our seniors, they just accepted whatever role it was (we gave them),” Aardema said. “You don’t get that every year. Guys that are grateful to play and be in a group. We had zero chemistry issues. Just an incredible group. I’m so lucky to be able to coach them. It’s just so fun. I guess that’s why I’ll leave here sad and disappointed, not in our effort but just in the outcome.

“These guys, they’ll put another number on the banner for the conference title, and they’ll go out and be successful young men. That’s the goal.”