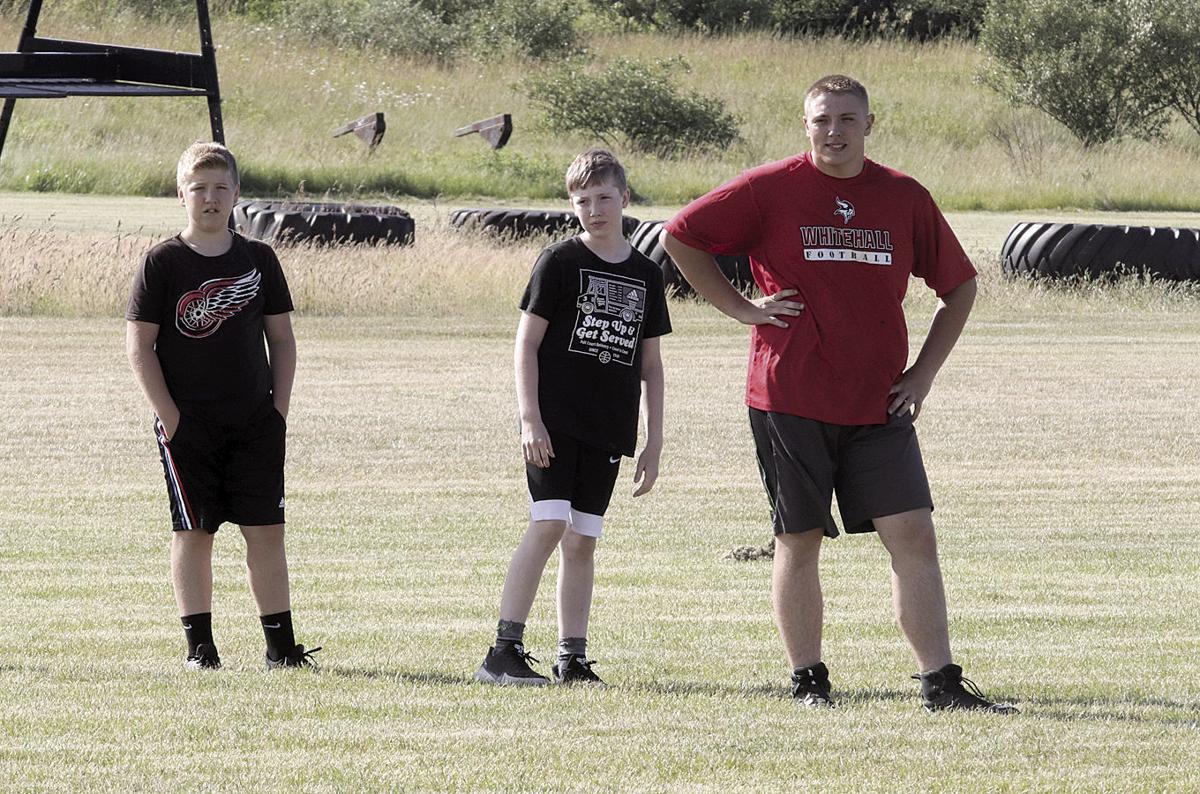 Whitehall athletes take a breather after completing part of a warm-up drill during Wednesday's summer workout session at the high school. The school's athletes are finally able to assemble together, albeit only outdoors with social distancing. 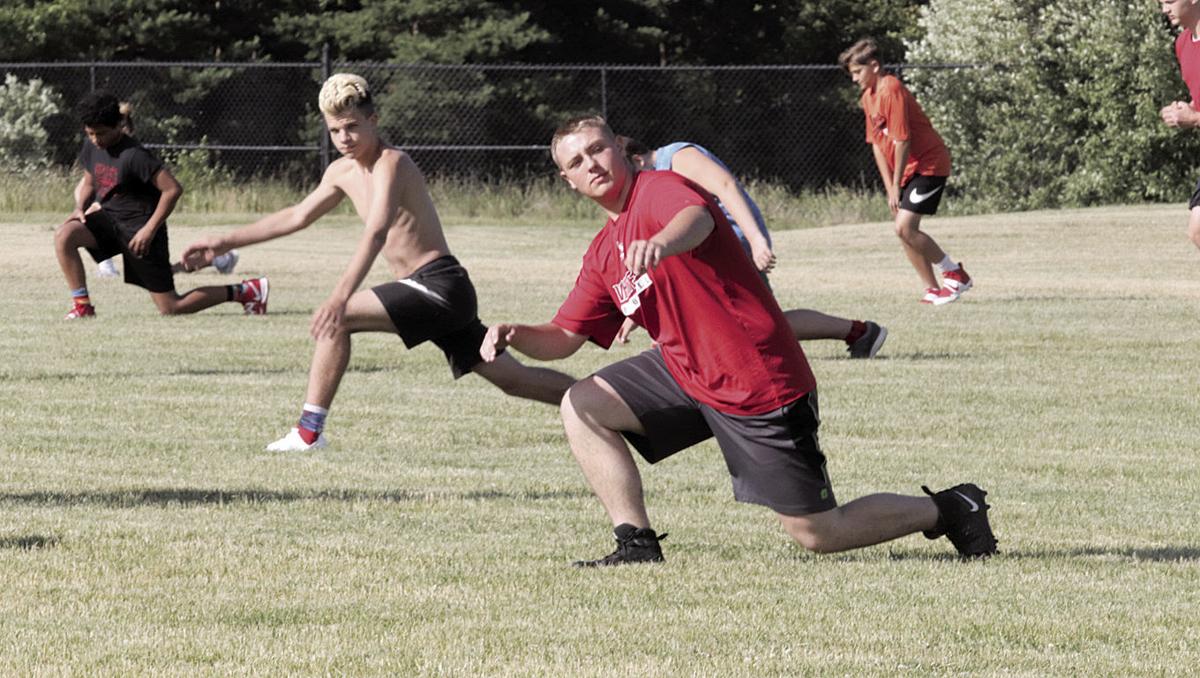 Whitehall athletes stretch their legs at the start of a workout Wednesday at the high school. With outdoor gatherings now permitted and MHSAA summer programs permitted to begin, schools have begun getting their athletes together after three months apart. 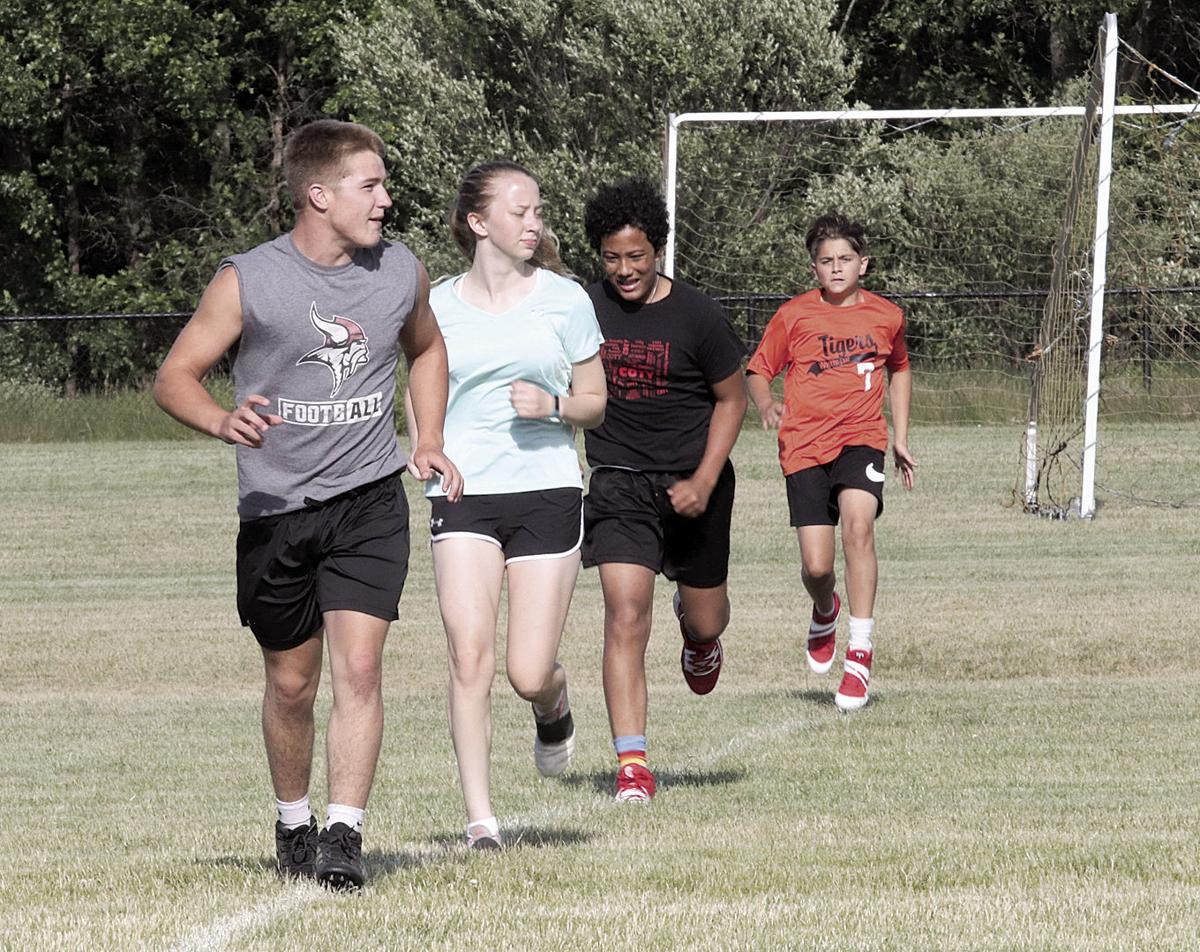 Whitehall athletes run during a warm-up at Wednesday's summer workout at the high school. 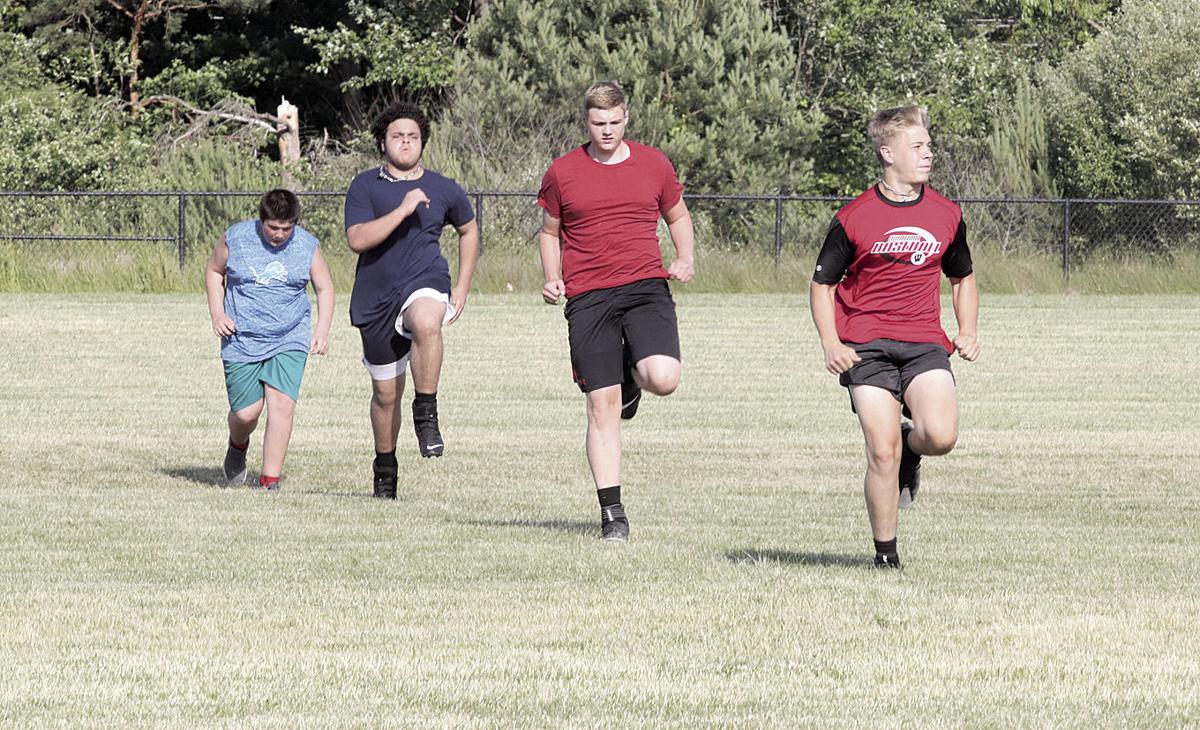 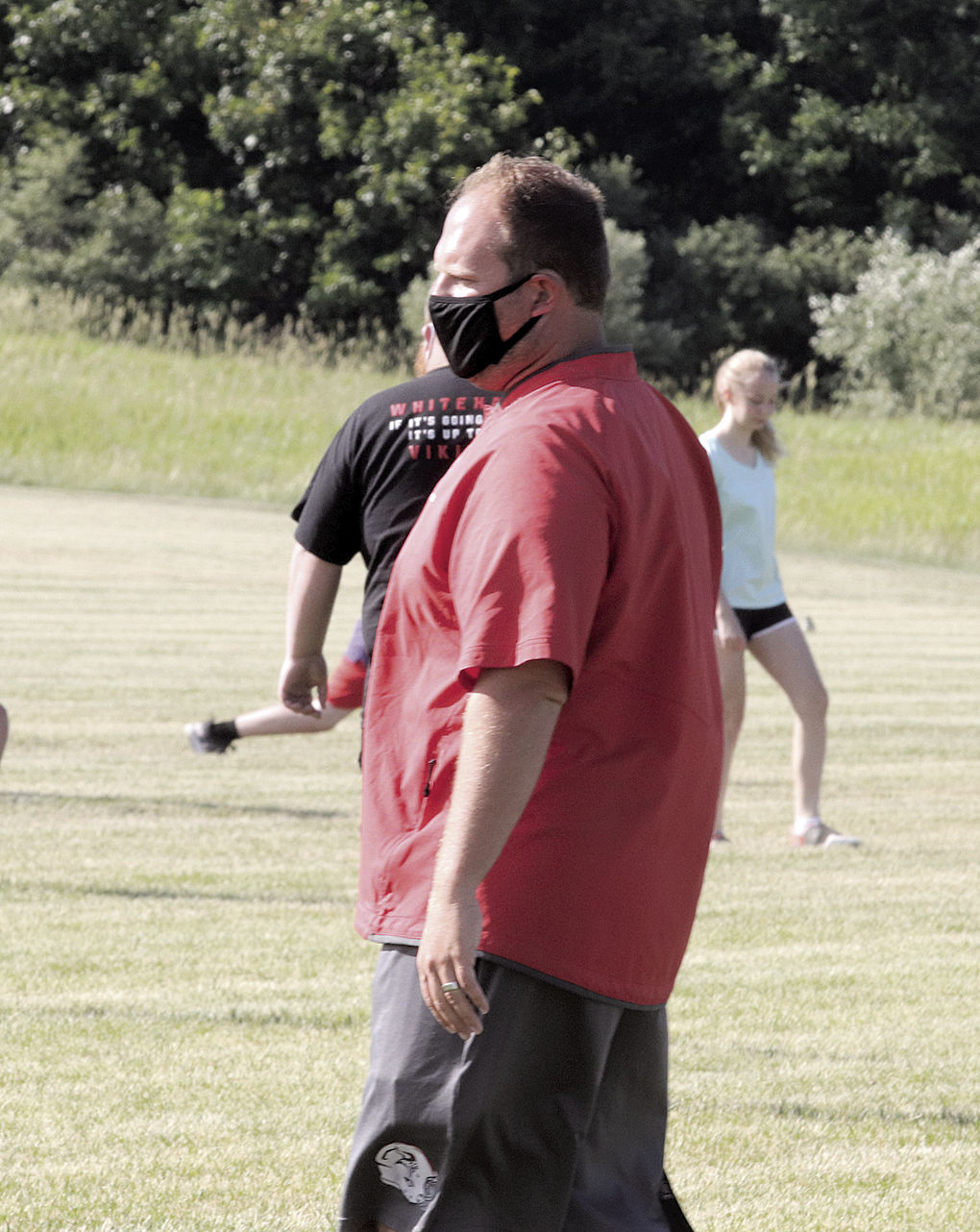 Whitehall football coach Tony Sigmon wears a mask for safety during Wednesday's summer workout. Mask-wearing for coaches is just one of many safety precautions the school is taking as athletes get together.

Whitehall athletes take a breather after completing part of a warm-up drill during Wednesday's summer workout session at the high school. The school's athletes are finally able to assemble together, albeit only outdoors with social distancing.

Whitehall athletes stretch their legs at the start of a workout Wednesday at the high school. With outdoor gatherings now permitted and MHSAA summer programs permitted to begin, schools have begun getting their athletes together after three months apart.

Whitehall athletes run during a warm-up at Wednesday's summer workout at the high school.

Whitehall football coach Tony Sigmon wears a mask for safety during Wednesday's summer workout. Mask-wearing for coaches is just one of many safety precautions the school is taking as athletes get together.

WHITEHALL — After over three months away from sports, Michigan high school student-athletes have finally started gathering in June, albeit with continued precautions to combat the spread of COVID-19.

Whitehall’s athletes began gathering Monday, June 15. Since then the school has held near-daily workouts twice a day, generally at 8 a.m. and 6 p.m. The activities at the morning and evening workouts are the same to allow for athletes who can only get to one; Whitehall football coach Tony Sigmon said the school has been seeing between 65 to 85 athletes at the morning sessions and 20 to 30 in the evening.

Of course, there are limits on what those workouts can entail. Even though outdoor gatherings of up to 100 people are permitted now under the Michigan Safe Start plan, social distancing still has to be maintained. Schools have to perform temperature checks before every workout, and coaches have been wearing masks. Whitehall, at least, hasn’t been using weights or any other apparatus besides the athlete’s bodies themselves at workouts.

Because of that, it’s likely the gains athletes are making in these sessions are more mental — thanks to finally being able to see teammates and coaches in person — than physical. But for now, Whitehall football coach Tony Sigmon will take it.

“Selfishly, it’s been great for me,” Sigmon said. “It feels good to coach again, and I’m sure it feels good for the kids to be around each other. Just being able to worry about getting ready for a sports season. that feels normal. I know it’s not just the kids benefiting from it. It’s exciting for us to see our kids, and not have to do it through zoom or text or some social media. That part of it has been refreshing. Mentally, it’s a big deal.”

Sigmon is just one of many Viking coaches that have been on hand for the workouts, a job being split among several coaches. Wednesday’s 6 p.m. session saw Sigmon joined by several of his football assistants. Other sports’ coaches have also pitched in. Since not every athlete can be at every workout for various reasons — jobs and transportation the main ones — the Viking coaches, Sigmon said, have been in touch to compare notes on how everyone is doing.

“I’ve probably had more contact with our coaches as far as, how this is going, what does this look like, in the past week and a half than I ever have in the summers past,” Sigmon, who’s entering his eighth season at Whitehall, said. “We’ve had all hands on deck. Quite a few coaches have stepped up. I’m excited and proud of the coaches that have stepped up. When you have buy-in from your adults and coaching staff, it’s easier for the kids to buy in as well.”

One of the biggest questions coming back, of course, is how each athlete has held up physically during the three months they were separated from sports. In that respect, Sigmon said the athletes did about as well as could be expected given the circumstances — not everyone, of course, has access to weights or exercise equipment at home.

“I was most concerned with our offensive linemen and defensive linemen coming back,” Sigmon said. “Were they going to be 20 to 30 pounds overweight? I’ve been pleasantly surprised. Our kids have come in relatively healthy. Are they ready for an hour or an hour and a half workout? No, but they’re closer.

“Our skill kids are who they are. They’ll need two weeks of cardio and conditioning to get back to where they were. It’s kind of where I expected them to be. As far as linemen, I’m pretty happy with where they’re at.”

Of course, without weights, equipment or even balls to work with, there’s only so much the Vikings can get out of the sessions, but Sigmon and the athletes have done their best.

“I think everyone would agree that we’ve never had to do this before, so it lends itself to trial and error,” Sigmon said. “Even at a restricted rate of things we can do, it’s definitely needed, and the kids are getting something out of it. To be able to do things that are more competitive, that’s when we’ll really move forward. When we can do things that look more like football drills, being competitive in a 7-on-7 and doing those types of things, that’s where you’ll see that type of growth model. We can get our kids in shape now and build from there.”

Even as the workouts continue, fall sports season, and even regular in-person schooling, isn’t a certainty right now. Although the MHSAA has consistently provided optimistic answers when discussing the possibilities of fall sports, no one, including coaches, can say with confidence what this fall will look like.

Sigmon, for one, can tell from his interactions with the athletes that they not only want sports back — in a very real sense, they need them back.

“They need an outlet,” Sigmon said. “They’re clamoring for it. That’s something that has to be weighed at some point...We always talk about how the teams that are most successful are, there’s a mindset of, ‘I have to do this’ or ‘I get to do this’. ‘I have to do this because my parents said I have to or my coaches said I have to’, or ‘Oh my gosh, I get to play sports’. I think there’s a new appreciation for this with our kids. there’s also a fear along with that too. I think no one wants to lose more opportunities to play sports at this level.”

For now, though, coaches and athletes will get by with what they can do. Just this small step towards normalcy has already paid big dividends.

“That anticipation and excitement is definitely there,” Sigmon said. “We’ve all missed being around each other. It’s not just the workout. wWe haven’t been able to have that contact. When it comes to being able to talk to someone and carry on a casual conversation, it’s been very refreshing and nice to have that.”