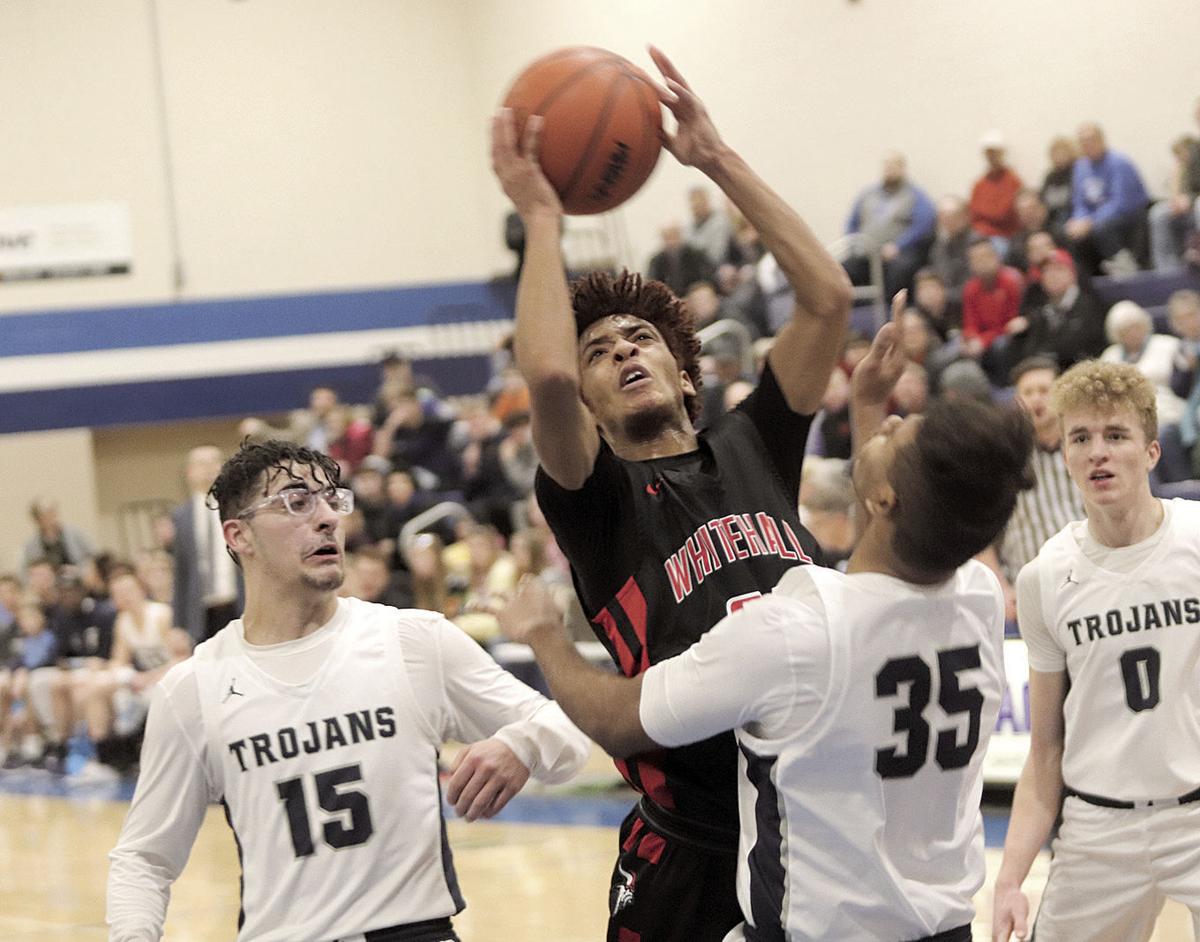 Whitehall’s Red Watson (with ball) bowls over Fruitport’s Rico Jones on a drive to the basket during a March district semifinal at Oakridge. Watson is one of many Vikings slated to return to the team, whose season has been disrupted again by COVID-19. 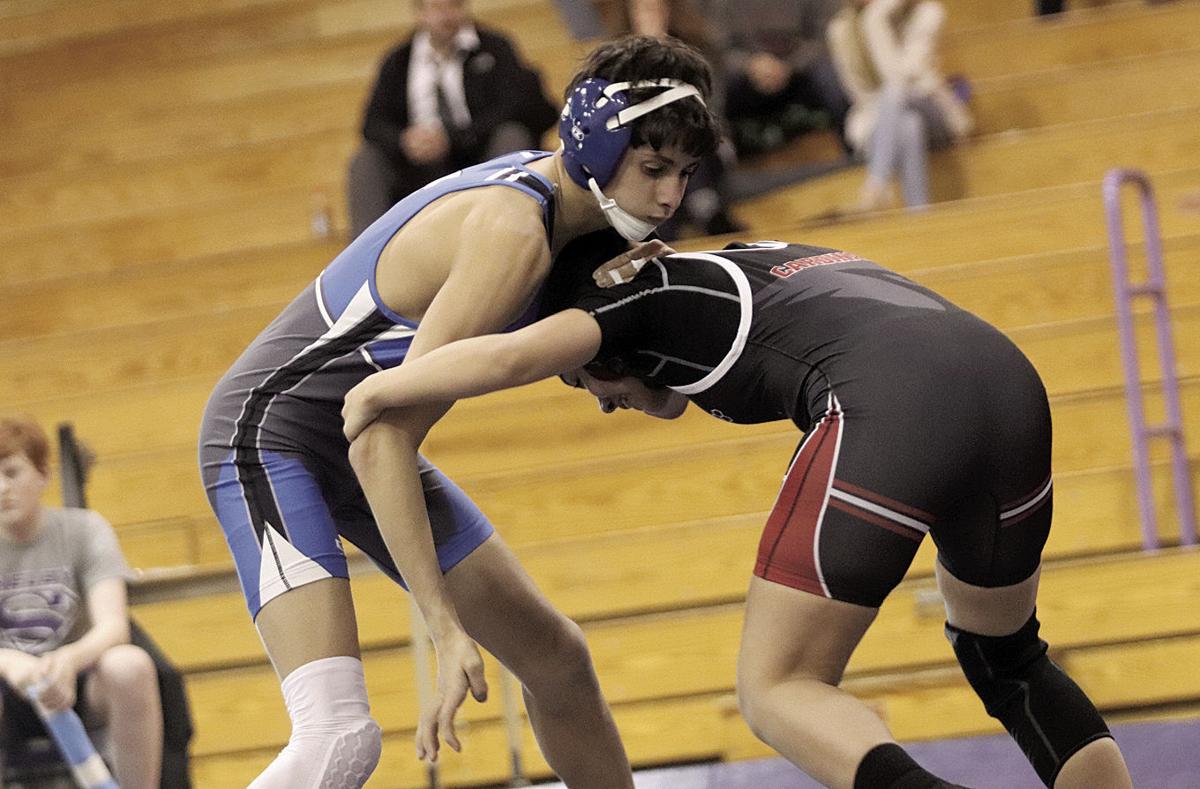 Montague’s Aidan Perreault (left) wrestles against Orchard View’s Abriana Balderas during a February district semifinal match at Shelby. The Wildcats are getting ready for the coming season, but due to the latest COVID-19 disruption, don’t know when it will begin. 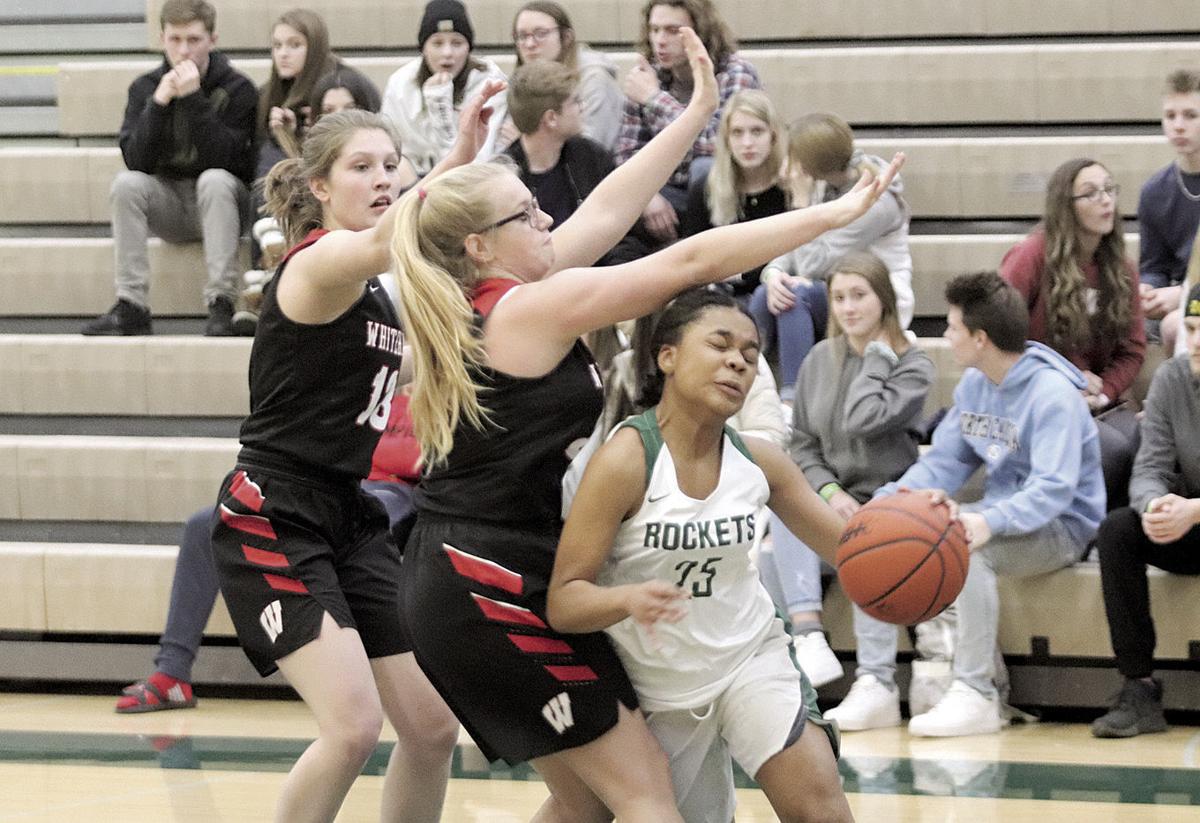 Reeths-Puffer’s Ariel Walker (right) tries to get to the basket against Whitehall defenders Jade Taylor (center) and Karoline Glamzi during a January game at R-P. Walker hopes to play a big role for the Rockets this season, but with sports on pause, uncertainty reigns.

Whitehall’s Red Watson (with ball) bowls over Fruitport’s Rico Jones on a drive to the basket during a March district semifinal at Oakridge. Watson is one of many Vikings slated to return to the team, whose season has been disrupted again by COVID-19.

Montague’s Aidan Perreault (left) wrestles against Orchard View’s Abriana Balderas during a February district semifinal match at Shelby. The Wildcats are getting ready for the coming season, but due to the latest COVID-19 disruption, don’t know when it will begin.

Reeths-Puffer’s Ariel Walker (right) tries to get to the basket against Whitehall defenders Jade Taylor (center) and Karoline Glamzi during a January game at R-P. Walker hopes to play a big role for the Rockets this season, but with sports on pause, uncertainty reigns.

Eight months ago, winter sports seasons were the first derailed by the COVID-19 pandemic when basketball seasons were halted. (No White Lake teams were affected because their seasons had been ended by the time the MHSAA stopped the postseason tournaments on March 12.)

Now, those sports are being affected again due to the latest pause in high school sports. For some, it’s a little surreal.

“In March, I’d never have thought we’d be going into December and not have a basketball season right now or be certain of it,” Whitehall boys basketball coach Nate Aardema, who coached during the last day of White Lake sports action pre-shutdown in March, said. “Some folks look at not having sports as trivial, but athletics brings a lot of value to young people, belonging to something. I don’t feel it’s trivial. People are battling bigger things, but it’s hugely important to myself and the kids I get to be around.”

Without the ability to gather in person, of course, that preparation is taking place virtually, much as it did in the early spring shutdown for spring teams whose seasons were delayed before ultimately being canceled.

“Right now we’re doing a lot of social media type messaging to make sure we get positive messages to them, making sure they’re doing something consistently on their own,” Reeths-Puffer girls basketball coach Rodney Walker said. “We want them to check in and kind of compete with each other on what they’re doing...Our senior leadership has stepped up and taken charge of that initiative.”

Wrestling is a sport for which so much of the preparation takes place by, naturally, actually wrestling other athletes, but with that not possible, Montague coach Kris Maddox and his staff have set up periodic workout challenges for his wrestlers to complete. Three times a week, they’re given a particular workout to do and given two days to report back their score or time.

Although the physical preparation is certainly key to getting ready for whatever the winter season brings, Maddox, like other coaches, is probably more concerned with keeping his athletes mentally sharp.

“We as a coaching staff are more concerned with the mental aspect of the students,” Maddox said. “As soon as we found out (about the shutdown), we set up a Google classroom, and we’ve been meeting once a week and basically giving the wrestlers mindset lessons...so when we start the season we’re ready to go.

“Mainly we’re worried about the mental health and well-being rather than everything else. (Everything else) will take care of itself.”

The Wildcat wrestling team was already looking at a much different season due to MHSAA restrictions on schedules. Teams were (and presumably still will be, when the season begins) limited to one competition per week, which could contain a maximum of four teams. That’s a far cry from wrestling’s normal schedule, which generally contains a quad meet plus a big Saturday tournament in most weeks.

Montague has a big incoming freshman class of wrestlers that ideally would be able to get some experience in JV matches at some of those tournaments, but without them as an option, Maddox said his and other programs might have to get creative.

Montague football headed back to Ford Field after semifinal victory

“That’s tough to figure out every opportunity to get on the mat,” Maddox said. “Luckily we’re in a tough conference with some good teams...Whitehall has a whole second team, and Ravenna and Hart have some extra wrestlers. We were counting on some of those teams to give our second (string) guys some good mat time. Normally, in a longer season, you can pull a starter out for some rest or recuperation. But in this shortened season, you kind of have to give the starters every opportunity you can.”

Building a team atmosphere has been tough amid the uncertainty as well. The R-P girls basketball team has to reload this season after losing current Western Michigan player Lauren Ross and fellow all-conference first-teamer Trina Lewis to graduation. Between the new roster, the JV call-ups, a transfer player, and the fact that Walker himself still hasn’t had a full regular off-season as the coach after taking over just two weeks prior to the first game last year, the Rockets certainly have more hills to climb than most.

Walker added his team is hopeful for a season and had been “doing all the right things” in practice, including mask-wearing, distancing and frequently washing their hands, and was avoiding risky social behavior.

On the other end of the experience spectrum is Aardema’s Vikings team, which was set to return the majority of the roster. So many returnees are back, in fact, that Aardema said the Vikings will have a tough time making room for 2019-20 JV players who are ready for varsity play.

With that type of veteran presence on the roster — all-conference performer Dayton Cole, as well as third-year varsity players Addison Bluhm and Evan Mikkelson, are among the presumed stars — the Whitehall boys are as motivated as any team for a season to occur.

“It makes it bigger,” Aardema said. “When you’re going to have 10, 11, 12 seniors, this is their only shot at it. One way or another, I’ll get to coach another season, but this is it for these guys. For some of them, like Casey Lownds, he wrecked his ankle in game one last year and missed his entire junior year. He’s been working really hard in the off-season. It makes it a little more nerve-wracking, knowing there are so many guys counting on getting this thing under control and getting in the gym.

“We talk to the kids all the time about controlling what we can control, not worrying about things like the officials or the environment, (but) the things within our grasp. Here they are with a season many of them have been looking forward to for so long, and things completely out of their control are impacting it in a huge way.”

Like Maddox, Aardema is as concerned about his players mentally as he is physically; the message to the Vikings has been to “stay ready” physically, but for a group of athletes that’s already seen so much of their lives affected, it can be hard to muster the optimism to keep going.

“You try to meet each kid where they are,” Aardema said. “If a kid is down or less optimistic, we try to focus on that more. It’s similar (to coaching) in that you have the highly motivated kids you never have to say anything to, and the kids you have to dangle a different carrot in front of, so to speak, and the kids in between. Trying to reach out to them and deal with them all remotely is a trick.”

Whatever comes of this latest shutdown, each coach and player is doing their best to maintain the belief that the season will go off, even if it’s not quite the way they hoped. Coaches always preach mental toughness, and in the age of COVID-19, that’s been more important for high school athletes than ever before.

“The kids feed off our mentality and optimism,” Maddox said. “If we have any kind of negative or core optimism, it’ll filter down to the kids. We have to give them the hope. That’s what we’re looking forward to. We’ll remain positive with everything. “When you get down to the meaning of sports, it’s the discipline and character building and creating young men for the future. Whether we have a season or not, hopefully we have a positive influence on these kids.”