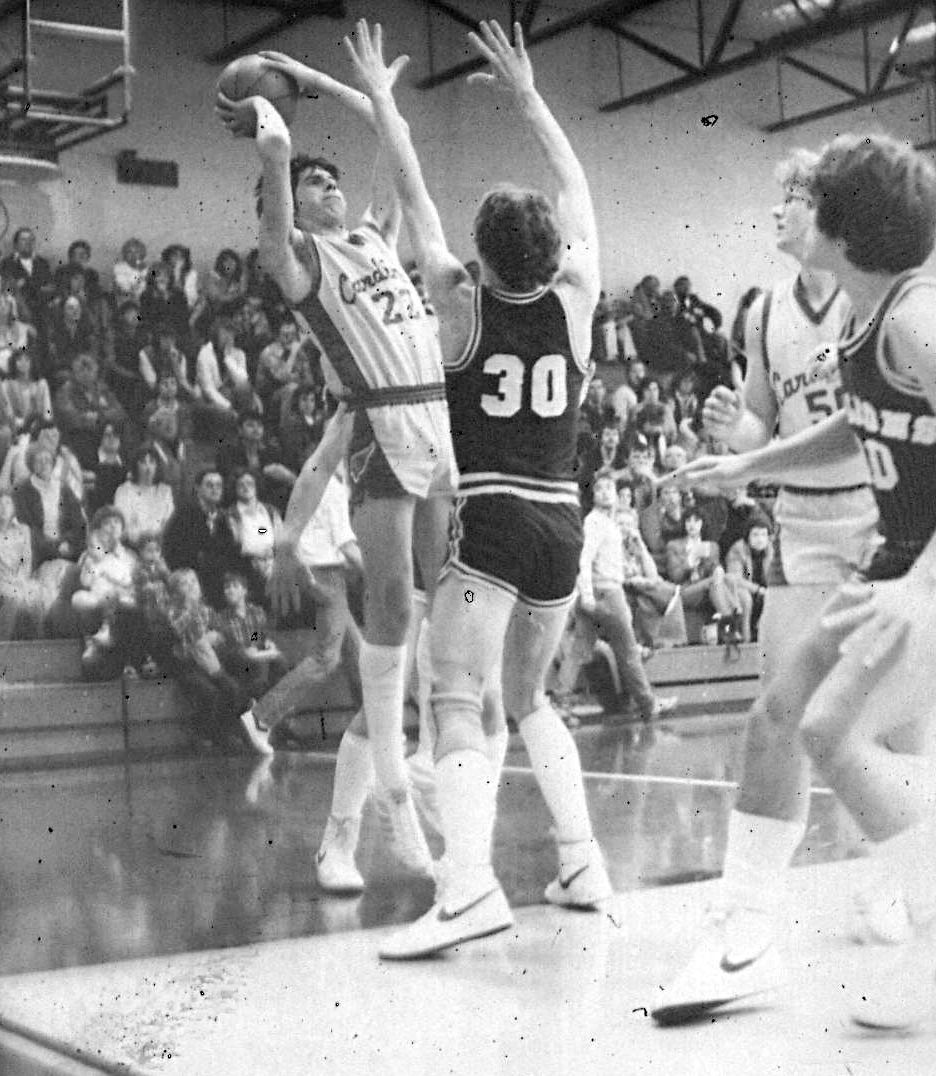 Whitehall baseball coach Warren Zweigle (left) lines up a shot during a January 1982 game he played for Mason County Eastern against Pentwater. Along with then-teammate and current Whitehall AD Greg Russell (50), Zweigle’s senior season was canceled due to budget cuts at MCE, giving them perspective regarding the current COVID-19 shutdown. 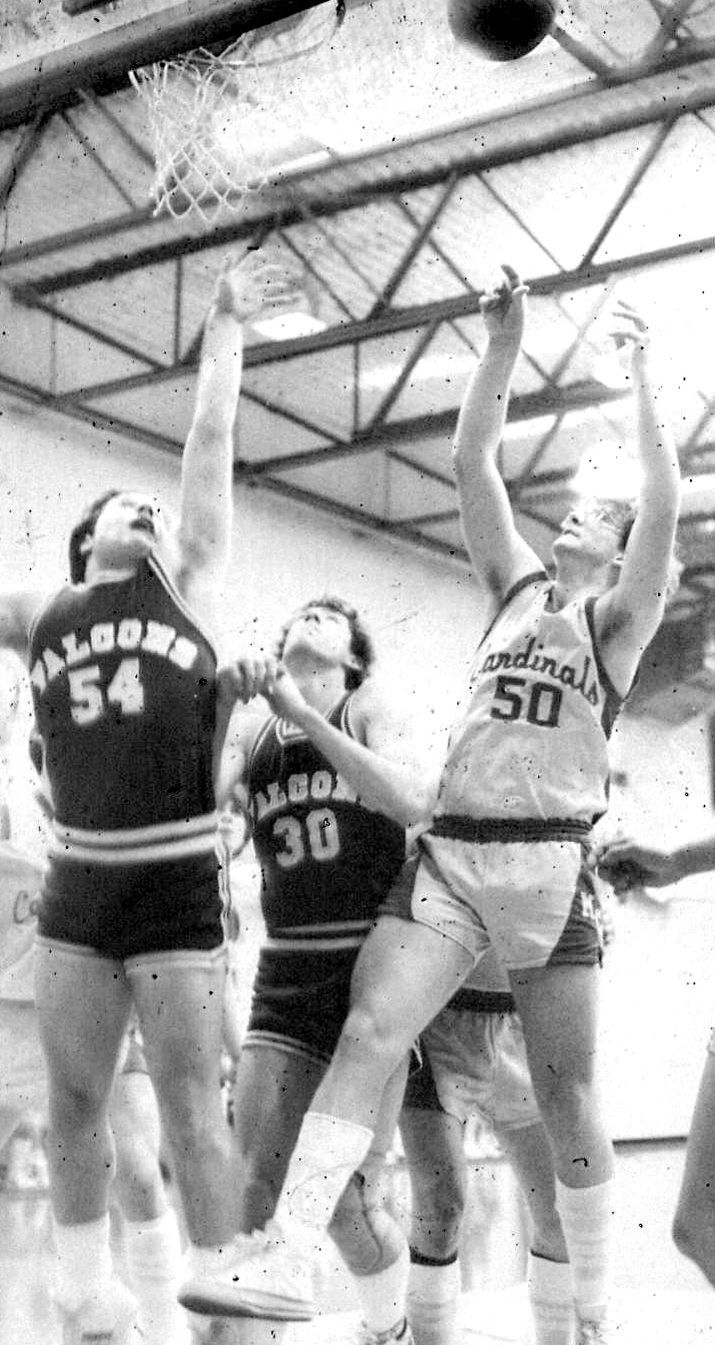 Whitehall athletic director Greg Russell tries to get a putback shot over a Pentwater player during a January 1982 game he played for Mason County Eastern. Russell's senior season was canceled due to budget cuts at MCE, giving him perspective regarding the current COVID-19 shutdown. 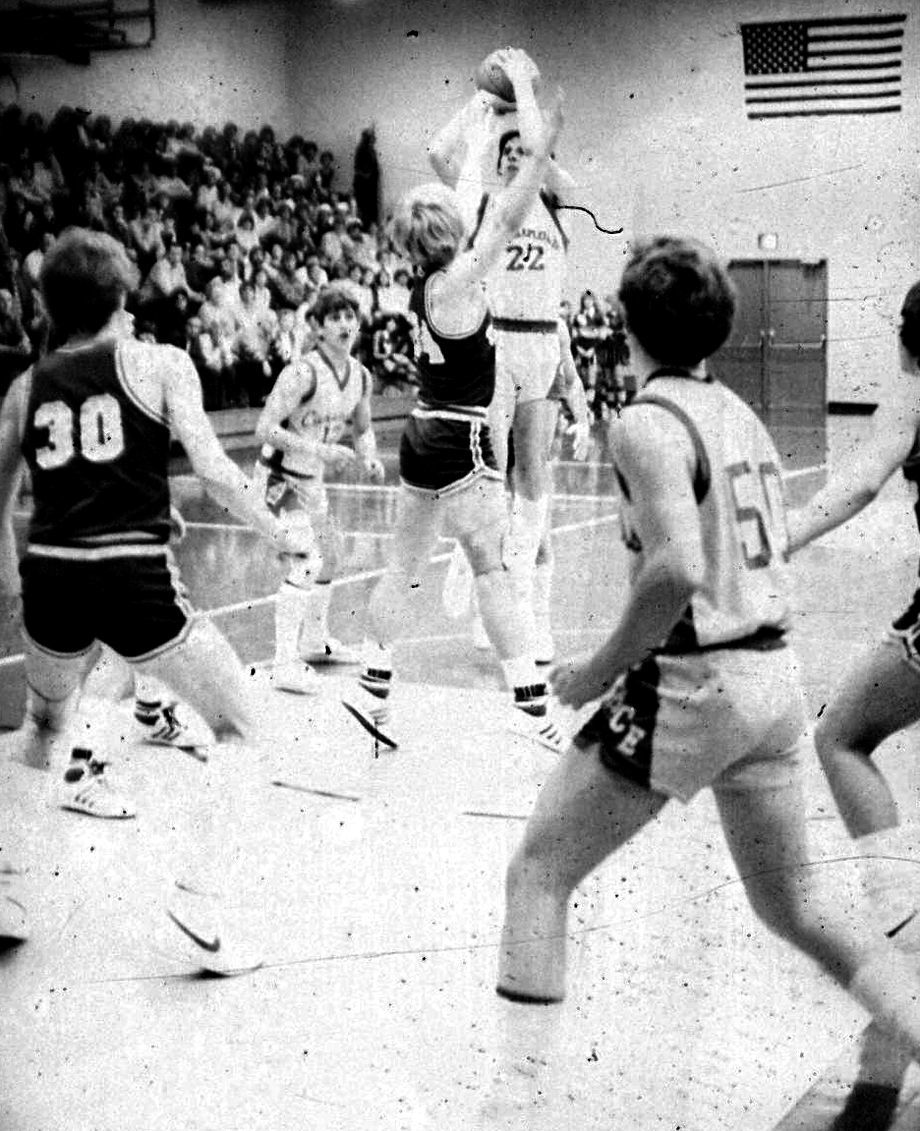 Whitehall baseball coach Warren Zweigle (with ball) puts up a shot in traffic during a January 1982 game he played for Mason County Eastern against Pentwater. Zweigle and then-teammate Greg Russell's senior season was canceled due to budget cuts at MCE, giving him perspective regarding the current COVID-19 shutdown. 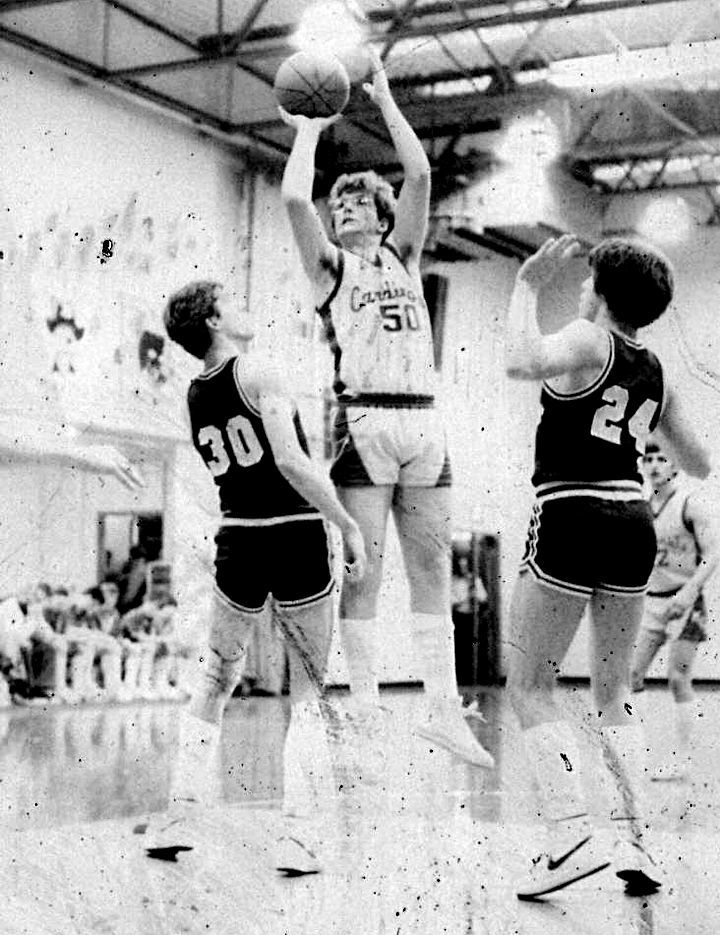 Whitehall athletic director Greg Russell puts up a shot over a Pentwater player during a January 1982 game he played for Mason County Eastern.

Whitehall baseball coach Warren Zweigle (left) lines up a shot during a January 1982 game he played for Mason County Eastern against Pentwater. Along with then-teammate and current Whitehall AD Greg Russell (50), Zweigle’s senior season was canceled due to budget cuts at MCE, giving them perspective regarding the current COVID-19 shutdown.

Whitehall athletic director Greg Russell tries to get a putback shot over a Pentwater player during a January 1982 game he played for Mason County Eastern. Russell's senior season was canceled due to budget cuts at MCE, giving him perspective regarding the current COVID-19 shutdown.

Whitehall baseball coach Warren Zweigle (with ball) puts up a shot in traffic during a January 1982 game he played for Mason County Eastern against Pentwater. Zweigle and then-teammate Greg Russell's senior season was canceled due to budget cuts at MCE, giving him perspective regarding the current COVID-19 shutdown.

Whitehall athletic director Greg Russell puts up a shot over a Pentwater player during a January 1982 game he played for Mason County Eastern.

A group of high school students finds out, out of seemingly nowhere, that their sports seasons are in jeopardy. Kids are upset. Parents are upset. Coaches are upset. There seems to be no clear sign of when their games will return. (The MHSAA announced Friday that it will be at least August when that happens, cancelling the rest of the spring sports season.)

It’s a familiar story nationwide in the age of COVID-19 — but, believe it or not, Whitehall athletic director Greg Russell and baseball coach Warren Zweigle know how kids feel. As high school seniors, they, too, had their games stripped away from them without warning.

The culprit then wasn’t a virus; it was a budget.

Both men graduated from Mason County Eastern High School in 1983, and both loved to play. In particular, they loved to play basketball. They were both among four starters set to return for the 1982-83 Cardinals, and Russell points out that the only reason it wasn’t five was that the fifth starter had been hurt the prior season, when the team went, by Zweigle’s recollection, 13-7. Earlier in Zweigle’s career, the Cards had been unbeaten going into the state tournament when he was pulled up to the varsity; they ultimately lost a double-overtime classic to then-powerhouse Western Michigan Christian.

The Cards were set to be loaded again in ‘82-’83. Jeff Tyndall, whose family produces players to this day at Mason County Central, and Zweigle each scored around 20 points per game, and Zweigle in fact went on to play for a season as a walk-on at Division II Lake Superior State. Two other starters on that team were also great athletes who went on to collegiate track and field. Russell was the fifth guy; as he jokingly puts it, “There’s only one basketball, and I got to touch it occasionally.”

But in August 1982, those dreams were snatched away. It was a rough time financially for many, as America’s economy hadn’t yet fully rebounded from a late-1970s recession. MCE’s budget, having seen a millage request fail on the ballot that summer, was one of many that suffered. Russell’s father had just left his position as superintendent of schools to work at the intermediate school district, and the cash-strapped school promoted Grant Griswold, who at the time had no administrative experience, to the superintendent’s job. It then immediately gave him the thankless task of figuring out how to make the numbers work.

“The knee-jerk reaction was just to cut everything that wasn’t academic,” Russell said. “He was probably acting on less than good information, and he and the board decided to make some drastic cuts to the district. He decided prior to the school year to cut all sports for the year.”

It was a move that stunned many, including the coaches. Russell said each of them turned up at the next school board meeting and volunteered en masse to forgo the year’s salaries to save the sports teams. Zweigle said that local parents got together and offered to raise the money for sports themselves. At that point, though, the decision was made and there was no going back; Zweigle said that the school feared that if it allowed such measures, it would decrease support for future millage requests. (The move created bad blood; Russell said that, to his recollection, all the school’s coaches declined to return the following year when sports were restored.)

“When those types of decisions are made, kids of high school or middle school age just don’t comprehend looking past the end of their nose, and they think that decision is unfair,” Russell said. “I just remember that feeling as a kid. I felt so slighted and didn’t have control of those things. We’d worked so hard for so many years to get to the point we were.”

Almost 40 years later, you can still hear the frustration in Zweigle’s voice when he talks about it.

“I was devastated that it got taken away,” Zweigle said. “It was kind of surreal. I didn’t really believe it was going to happen. All along I believed it would change and they would reinstate sports.

“I don’t like to talk about myself, but I was a pretty good basketball player...I think we would’ve run into Western Michigan Christian or something (at some point in the state tournament), but we had a pretty good team.”

Michigan did not, at the time, have a Schools of Choice program; Russell said that to attend a school whose district you didn’t live in, students had to pay tuition at another school. It wasn’t an option for even the most sports-crazed of MCE kids.

Ultimately, an athletic booster club was able to convince the board to permit it to fund a spring sports season, so the Cardinal students were able to have one last go-around on the field of play. It created a new appreciation for the opportunity, one that perhaps hadn’t existed before.

So lasting was the impact of that year that Russell believes it changed his career trajectory. He began his college career planning to go into engineering, but eventually changed his mind, inspired by his high school chemistry teacher Jack Treml, a teacher Russell said was very popular at the school. Russell followed Treml’s lead, earned a degree in chemistry and physics, and decided to provide students the opportunity he’d seen taken away as a senior. He coached for many years at various levels at Whitehall before becoming the athletic director.

“Had we had sports our senior year, I probably would’ve been an engineer,” Russell said. “But after not having sports, I had that desire to help kids and coach and do all those things.”

Zweigle, who had previously been a basketball-first guy, felt his love for baseball grow when he finished his MCE career on the field that spring. When he ultimately became a teacher too, coaching the game was the natural next step, and the rest was history — Zweigle is now in the state coaches’ association Hall of Fame.

However and whenever the school and sports disruption caused by COVID-19 finally ends, both men hope that it has the same effect on those who missed out on their games that it did on them. The dream would be for many to go on and use the bad feelings from this time to have a positive effect on themselves, and more importantly on others, in the future.

“I hope kids understand how precious every one of these opportunities are,” Russell said. “I think we all take things for granted as teenagers, but when things get taken away from you, I hope kids rally around one another and do their best to make the best of every opportunity from this point on.

“Don’t miss out on an opportunity to play. Don’t skip workouts. Don’t do what humans sometimes do and procrastinate. I hope our kids see it as a way to push themselves and get better.”

And in the meantime, when high school athletes are at that age when it’s easy to not believe any adult can possibly know what they’re dealing with, Russell and Zweigle can assure them: They do.

“It’s definitely rekindled all my feelings and my good and bad emotions from that era,” Zweigle said. “In its own sad, demented way, I think this will allow kids to appreciate their opportunities a little more than they have.

“I don’t want to say that’s a silver lining, but I think kids will realize it’s not guaranteed. For a long time people have thought, ‘it’s there if we want, we can play if we want’. Maybe some more kids will step up and play when they wouldn’t have in the past.”