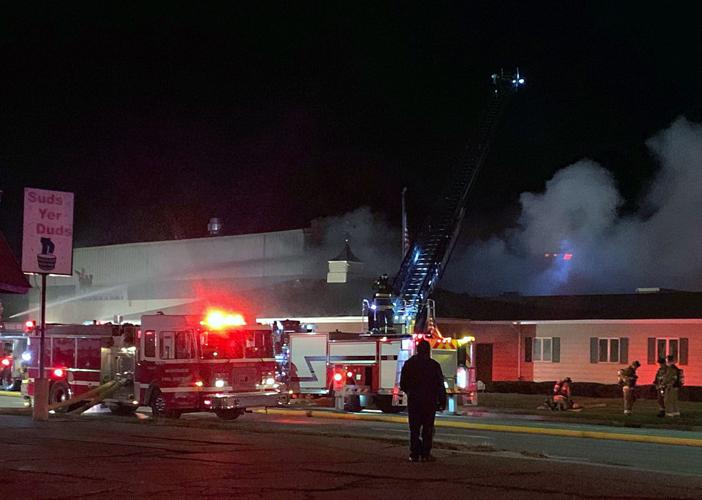 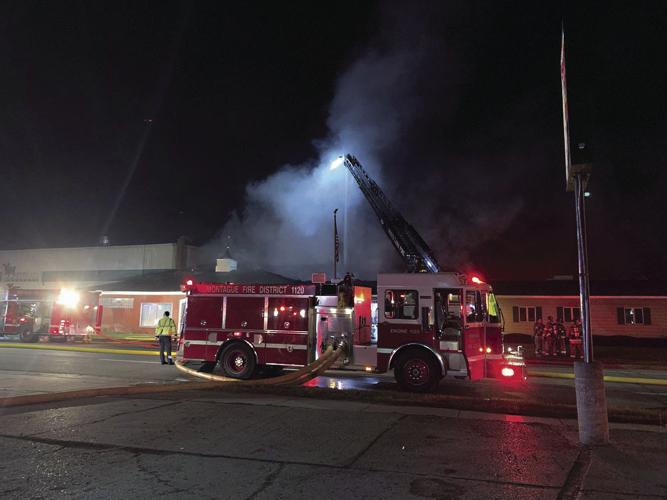 I only did the three

of the size of the 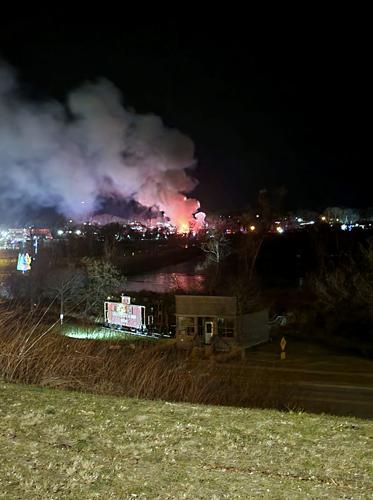 The view of Christmas Day fire from Hansen Hill in Whitehall. The fire took place at Whitehall Products in Montague on Dec. 25, and rekindled on Dec. 26.

I only did the three

of the size of the

The view of Christmas Day fire from Hansen Hill in Whitehall. The fire took place at Whitehall Products in Montague on Dec. 25, and rekindled on Dec. 26.

On Christmas day, a fire was reported at Whitehall Products, located on Water Street in Montague. Firefighters from several municipalities responded, and worked together to stop the commercial fire. The following day, the building was on fire again, bringing the firefighters back to put out the fire again.

Whitehall Products is a factory that manufactures home accents such as address plaques, mailboxes, and more.

The Montague Fire Department responded to the call, arriving first on the scene. The day after the initial fire, personnel returned to the site to work with the cleanup crew and to make sure that the fire was out.

According to Montague Fire Chief Ron Anderson, the firefighters spent about 6 hours at the site on Dec. 25. Unfortunately, the building still caught fire again later that Sunday night. The cause of the fire remains under investigation. The fire personnel returned on Dec. 26 to spend 4 hours extinguishing the rekindle.

Montague Fire Chief Ron Anderson said that they called in Muskegon Heights Fire Department to use their platform truck, which lifts fire personnel to spray the fire from above.

“It was a little surprising but not necessarily unexpected,” said Anderson, “There isn’t a fire department around that hasn’t had to deal with a rekindle.”

White Lake Fire Authority Chief Pete McCarthy was there to assist with the fire on both days. He said that it was not unusual that the fire rekindled the next day.

“Unless we disassemble a building and look at every nook and cranny, we won’t know.” said McCarthy, “All it takes is one little ember that we can’t see.”

McCarthy said that the building has quite a few layers of ceiling, and this is due to the age of the building which brings updates to modernize the appearance. “Commercial fires are typically a lot more complicated,” he said.

Fortunately, the worry of people’s safety was less of a factor than a residential fire because the building was vacated for the holiday weekend. Still, a commercial fire typically happens when the people around it are alert, unlike some residential fires. “When you’re at work, you’re awake,” said McCarthy.

McCarthy was impressed by the Montague Fire Department during the fire at Whitehall Products. Firefighters spread out while fighting the fire from inside, in front, above, and behind the building.

“I was so impressed with the knock down,” said McCarthy, “Montague made great tactical decisions.”